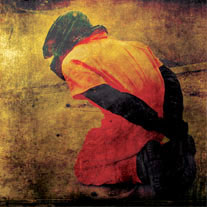 People standing in the hallways and lobby were taken by surprise. Who would have expected to see a demonstration (though small) at a peaceful convention. And, yes that was exactly what happened at the ICNA – MAS Convention in Hartford, CT on May 29, 2011.

At the convention, ICNA Council for Social Justice organized a few workshops and one of these workshops was on the topic of, “Faith Communities Working Together for Peace and Justice”. The speakers included Dr. Rev. Dennis Perry from Aldersgate United Methodist Church, Mike Daley from Interfaith Peace Builders, Debbie Almontaser, John Humphries from National Religious Campaign Against Torture and Naeem Baig from ICNA CSJ.

After the speeches a small and silent demonstration against torture took place at the convention. The participants in the demonstration walked in the hall ways and ended it in the main lobby near the registration booths. The demonstrators were lead by John Humphries and Naeem Baig and they held banners in their hands as they walked passed the people standing in the hallways chatting with their families and friends.

This demonstration was held to raise awareness against torture and to convey this message that faith communities are working together to end the use of torture in America.