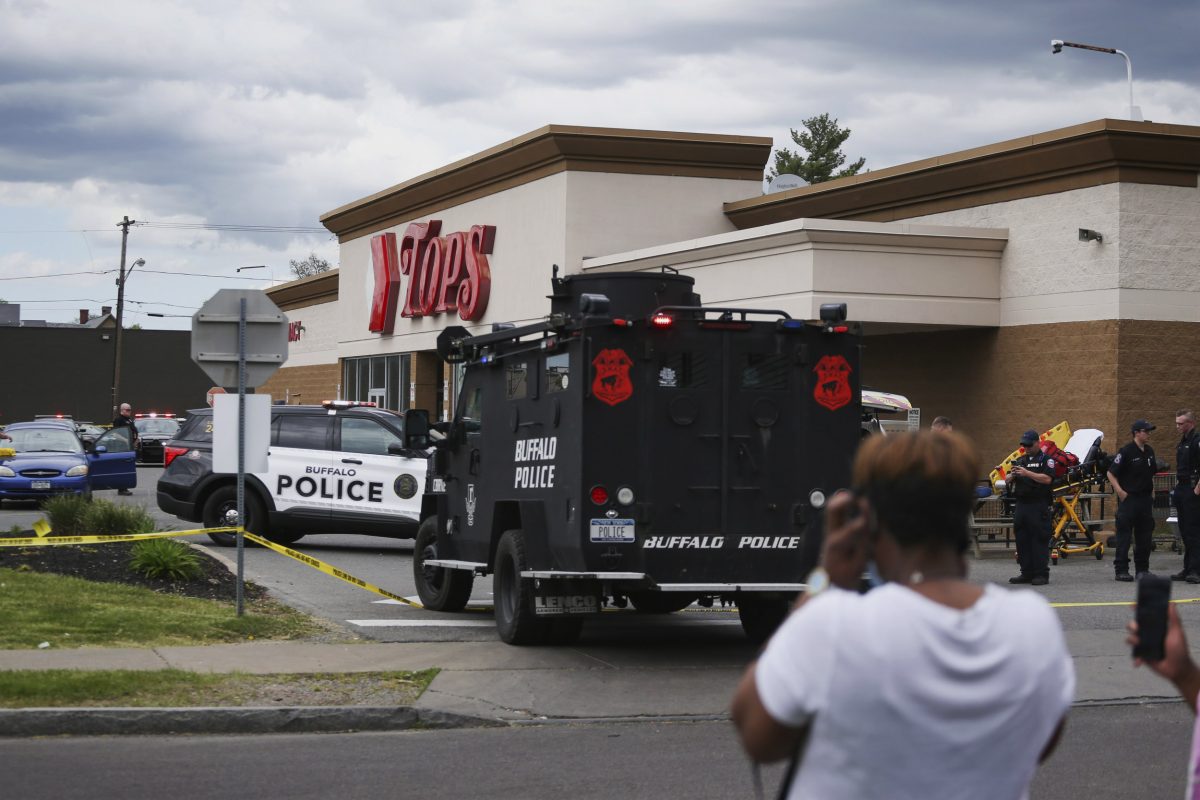 A white supremacist carried out an attack in a majority Black neighborhood in Buffalo, NY.

The man opened fire at a grocery store, killing 11 people, and injuring 2. The gunman is identified as Payton S. Gendron from a small town in New York’s rural Southern Tier. Gendron drove 200 miles to attack the store. He live streamed the attack to promote his agenda, framed by the white supremacist replacement theory.

After the attack and capture, a white supremacist manifesto published by Gendron was revealed. The replacement theory is a white supremacist ideology that essentially claims that white Americans are at risk of being replaced by people of color. The “theory” has its roots in California during the 1990s, where many Republican political officials, in an attempt to hold onto power, were spreading racist rhetoric warning white Americans of immigrants who would lead to the inevitable “decline of the state’s white population.”

The replacement theory has further roots in antisemitism – blaming Jews for non-white immigration. In Charlottesville, VA, white supremacists chanted “Jews will not replace us” in hoards in 2017.

A poll from the Associated Press Center for Public Affairs Research found that 3 in 10 Americans believe that additional immigration will cause “native,” (meaning white) Americans to lose their economic, political, and cultural influence. The same study found that a third of American adults believe that there is an effort to “replace’ US born Americans with immigrants.

The replacement theory is used further as an explanation for the loss of manufacturing jobs in the Midwest to spikes in drug overdoses among white people. The ideology is used to blame everything on non-whites, and it is false. Tucker Carlson, a political commentator, has aided in the efforts to popularize and normalize replacement theory. The replacement theory, when touted and paraded by Republicans, centrists, news pundits, social media influencers, and so on, is a tool of racism, white supremacy, and danger – it leads to the active killing of non-white people.

One of the first goals in Gendron’s manifesto was to “kill as many blacks as possible.” Mass murder fueled by racism is not uncommon in America, and the West. In Christchurch, New Zealand, a white supremacist killed 51 people at a mosque in the name of White Replacement Theory – live-streaming the massacre.

In 2011, Dylan Roof killed Black churchgoers in Charleston, in 2015, the Tree of Life Synagogue was targeted, and in 2019, in El Paso, Texas, 23 people, mostly immigrants, were murdered by a white supremacist. The Guardian says, “Mass atrocities do not occur in a vacuum. They are enabled by a present normalization of a lengthy previous history, a process that the philosopher of mass killing Lynne Tirrell labels the social embeddedness condition. White Replacement Theory was the dominant structuring narrative of Nazi ideology. Adolf Hitler also announced his genocidal intent in a lengthy manifesto about the supposed Jewish threat to white civilization, entitled Mein Kampf, which was published in 1924. Hitler also was obsessed by mass immigration, and the threat it posed to “white civilization.”

It is obvious that replacement theory is allowing for mass murders to occur – the normalization of the ideology is leading to the active deaths of people of color in America. When pundits attack critical race theory, when they attack immigration, when they attack anything that would bring reparation to those harmed by US imperialism and racism, understand that this is fueled by white supremacy. The country needs to undertake the role of white supremacy in its institutions – it needs to be unequivocally addressed, criticized, condemned.

We pray for the souls of the lives lost in this mass murder. These are the names of the victims so far identified: