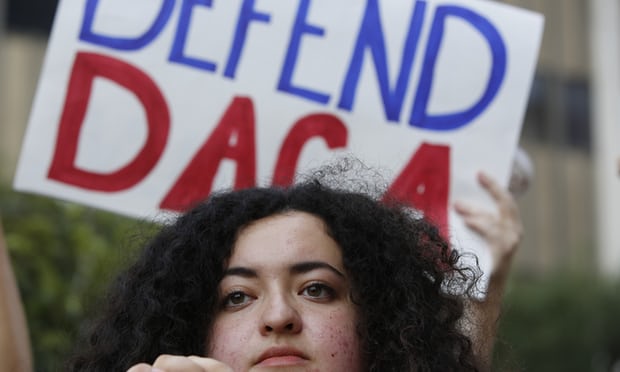 The Trump administration announced on Tuesday it plans to scrap the program giving temporary legal immigration status to people who arrived in the US illegally as children. Attorney general Jeff Sessions said the US would end the Deferred Action for Childhood Arrivals (Daca) policy in March 2018, throwing almost 800,000 people who currently benefit from the program into a state of turmoil and fear. Congress now has up to six months to find a legislative alternative, after Sessions announced that new applications will no longer be accepted. But what is Daca, who are the people affected (known as “Dreamers”), and what will happen to them?

Daca is a federal government program created in 2012 under Barack Obama to allow people brought to the US illegally as children the temporary right to live, study and work legally in America. Those applying are vetted for any criminal history or threat to national security and must be students or have completed school or military service. If they pass vetting, action to deport them is deferred for two years, with a chance to renew, and they become eligible for basics like a driving license, college enrollment or a work permit.

Who are the ‘Dreamers’?

Those protected under Daca are known as “Dreamers” and 787,580 have been granted approval. To apply, they must have been younger than 31 on 15 June 2012, when the program began, and “undocumented”, lacking legal immigration status. They must have arrived in the US before turning 16 and lived there continuously since June 2007. Most Dreamers are from Mexico, El Salvador, Guatemala and Honduras and the largest numbers live in California, Texas, Florida and New York. They currently range in age from 15 to 36, according to the White House.

Why are they called Dreamers?

The Daca program was a compromise devised by the Obama administration after Congress failed to pass the so-called Development, Relief and Education for Alien Minors (Dream) Act, which would have offered those who had arrived illegally as children the chance of permanent legal residency. The bipartisan act was first introduced in 2001 and has repeatedly failed to pass.

What has Trump announced?

During last year’s divisive election campaign, Trump promised to rip up Daca immediately, and make the deportation of the US’s estimated 11 million undocumented persons a top priority, along with his threats to ban all Muslims from entering the US, and build a wall along the entire border with Mexico. He has not yet successfully executed any of these threats.

The administration has now announced it will begin “an orderly, lawful wind down” of Daca, including “the cancellation of the memo that authorized this program”, which was a memo from homeland security secretary Janet Napolitano to immigration chiefs in 2012 telling them not to enforce deportation of Dreamers. Trump is now giving Congress six months to come up with a legislative solution to resolve the Dreamers’ status. Because Obama created the Daca program as an executive policy decision, Trump had the power simply to reverse his policy. Meanwhile, he has indicated that the government will “generally not take actions” to remove law-abiding Daca recipients.

What will happen to the Dreamers?

New applications under Daca will no longer be accepted. For those currently in the program, their legal status and other Daca-related permits (such as to work and attend college) will begin expiring in March 2018 – unless Congress passes legislation allowing a new channel for temporary or permanent legal immigration status – and Dreamers will all lose their status by March 2020. Technically, as their statuses lapse they could be deported and sent back to countries of birth many have no familiarity with. It is still unclear whether this is the fate the government now has in store for them. Fear of this had been rising in the run-up to Tuesday’s announcement. Those with work permits expiring between 5 September 2017 and 5 March 2018 will be allowed to apply for renewal by 5 October.

What has Trump said about Dreamers?

On the campaign trail in 2016, Trump said his administration would “immediately terminate President Obama’s two illegal executive amnesties,” by which he meant Daca and another order protecting some parents of children in the US, where the children had legal status but the parents were illegal immigrants. Trump did scrap the second program, which had been blocked in the courts and had never come into effect. In a speech in August 2016, in North Carolina, when talking about poverty and the elusiveness of the so-called American dream for many US citizens, Trump indirectly criticized Daca and its beneficieries, saying: “We want our children to be Dreamers, too.” But since becoming president, Trump said that he wanted to “work something out” for Dreamers. “We don’t want to hurt those kids,” he said. “We love the Dreamers.” On Tuesday, he said: “I have advised the Department of Homeland Security that Daca recipients are not enforcement priorities unless they are criminals, are involved in criminal activity, or are members of a gang.”

Why were Republican state attorneys general suing Trump over Daca?

After watching Trump fail to issue an executive order rescinding Daca upon taking office, and publicly dither over the Dreamers, anti-immigration Republican state leaders decided to force his hand. Many in Trump’s hardline conservative base argue that Daca is unconstitutional and Dreamers are illegal and threaten American jobs and culture. Ken Paxton, the attorney general of Texas, sent a letter to Sessions (who opposes Daca) in June, threatening to add Daca to another anti-immigration lawsuit already under way against the federal government unless it cancels the program by 5 September. That letter was also signed by the attorneys general of Alabama, Arkansas, Idaho, Kansas, Louisiana, Nebraska, South Carolina, Tennessee and West Virginia. Tennessee has since reversed course and now supports Daca and finding a permanent legislative solution for those in immigration legal limbo.

In addition to immigration advocates and most Democratic politicians, a majority of national politicians in the Republican party reportedly did not want Trump to scrap Daca, including such prominent figures as House speaker Paul Ryan and Arizona senator John McCain. A prominent group of evangelical leaders wrote to Trump last month telling him that Dreamers “are leading in our churches and our communities”.