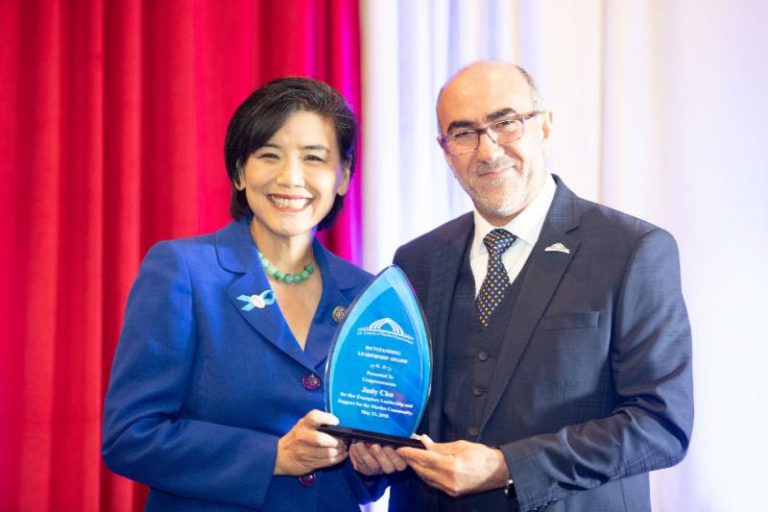 The US Council of Muslim Organizations (USCMO) held its Ramadan Iftar (Dinner) on Wednesday May 23rd, 2018 at the Marriott Crystal Gateway in Washington, DC. The room was packed with over 200 elected and government officials, foreign diplomats, interfaith and community leaders. The Keynote speaker was Mr. Robert Malley, President of International Crisis Group, former special assistant and senior adviser to President Obama and President Clinton.

The Iftar ( breaking of the fast) dinner was a vibrant success, bringing communities and officials from across the nation together to build relationships and mutual understandings over good food and in the spirit of Ramadan. Among the crowded room of guests were Congresswoman Judy Chu (D-CA), Congressman Keith Ellison (D-MN), State Representative Ilhan Omar (D-MN).

At the event, Congresswoman Judy Chu was recognized and presented with the leadership award for introducing H. Res.869 which recognizes American Muslims’ history and contributions to our Nation. “It is the contributions of Muslims that has made America the place that it is today,” said Congresswomen Chu, adding “This resolution is reassuring Muslims that they have a home here and that they are appreciated”.

“Congresswoman Chu’s introduction of this resolution is a historic recognition of American Muslims during times of heavy pressure on the community. We are thankful for her leadership and support” said USCMO Secretary General Oussama Jammal.

USCMO is urging the public to contact their congressional representatives and ask them to sign on as co-sponsors.