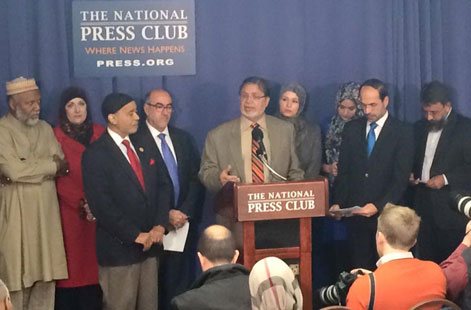 The US Council of Muslim Organizations (USCMO), a coalition of leading national and local Muslim organizations, today announced major educational, outreach and civic empowerment initiatives to address growing Islamophobia in America and to enhance national security through the promotion of freedom and justice.

Proposed USCMO initiatives include a drive to register one million voters prior to the 2016 presidential election, a “One America” campaign to enhance understanding of American Muslims and Islam and a “National Open Mosque Day” designed to help increase interactions between American Muslims and citizens of other faiths and backgrounds.

Another initiative planned by the national Muslim coalition includes the formation of new and strengthened alliances with interfaith partners, social justice groups and other minority communities that have faced or continue to face similar challenges.

The USCMO will also seek to increase emergency preparedness for Islamic institutions and individual Muslims to address the rising number of hate incidents nationwide.

USCMO member organizations discussed the real and present threat of violent extremist groups that are preying on young people via the Internet and who twist the meaning of the Quran to justify their atrocities.

It was noted that groups such as Daesh (ISIS) kill more Muslims than they do people of other faiths.

According to law enforcement experts, American Muslims have been on the front line of identifying and reporting suspected violent extremist activity.

USCMO groups shared their experience and information regarding effective “community-driven” solutions to the problems of violent extremism and recruitment with the aim of providing recommended strategies that expand on and improve their current efforts.

The coalition committed itself to combat all forms of violent extremism in the homeland. Experts in the field shared some factors related to radicalization that include isolation, the presentation of a twisted religious ideology and toxic anti-Muslim political rhetoric and negative perceptions of American policy, particularly in the Middle East.

These strategies will seek to prevent the targeting of members of the American Muslim community by those espousing extremist ideologies and will help young people to rejoin the mainstream community.

In each of the initiatives, coalition members will seek to protect the civil liberties of all Americans.

“USCMO leaders and members understand the magnitude of the challenge facing our nation and our community and will not allow either Islamophobes or un-Islamic extremist groups like ISIS to define American Muslims or to decide our fate,” said USCMO Secretary General Oussama Jammal. “American Muslims will define themselves and will chart their own destiny by securing both our faith and the security of America.”

The initiatives announced at the news conference were discussed Sunday at a day-long national summit of more than 100 national and regional American Muslim leaders held in Virginia and representing all areas of the country and all segments of that faith community.

Sunday’s summit was convened in response to the unprecedented rise in bias incidents targeting American Muslims in the wake of the Paris terror attacks, the San Bernardino killings and recent inflammatory anti-Muslim political rhetoric.