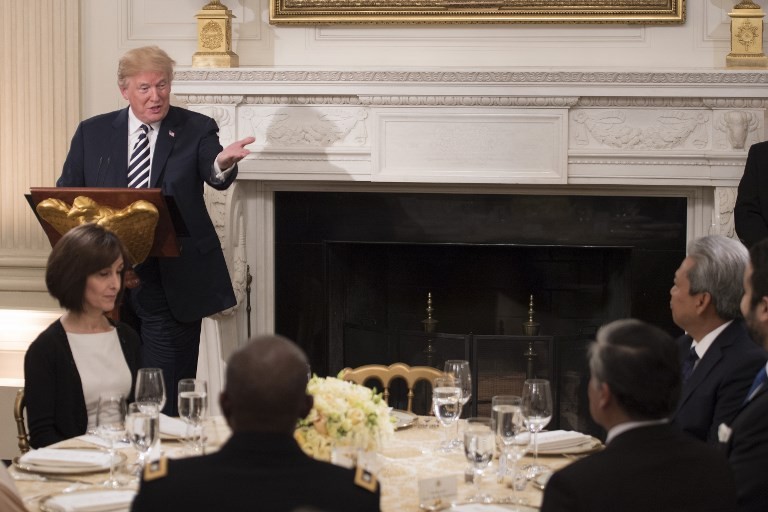 Two weeks ago, President Trump hosted an iftar at the White House, about which I wrote a response questioning his intentions behind having the event. As a general summary, I noted how this event is conveniently timed around the Supreme Court’s decision concerning his travel ban enacted on many Muslim-majority countries, and his history of inflammatory statements towards Muslims. During the President’s speech given at the dinner, he wished “Ramadan Mubarak” to those around him and to Muslims around the world, and further highlights how this iftar “honor[s] a sacred tradition of one of the world’s greatest religions.” Excuse me a second while I go get my eyes and ears checked. I don’t trust myself to make a comment about this that doesn’t involve unprofessional name-calling and possibly flipping my laptop, so I’ll just stick to the description of it by CBS as a “dramatic departure” from previous rhetoric. Trump also talked about his great friendship with leaders from the Middle East, and how he has “made a lot of progress” on relations there in the past year. The fact that the people who could corroborate this statement can’t enter the country is convenient to say the least.

Moving away from President Trump’s speech and looking at the invite list for the event, the people appear to have been selected carefully. As a college student who hasn’t really done much with her life that would warrant the attention of an event like this, it wasn’t much of a surprise that an invitation didn’t come my way for this iftar. However, many prominent Muslim figures in the country who had gone in the past didn’t make the cut either. Trump did address Muslim servicemen, but instead of the numerous contributors to American society he could’ve chosen from, he addressed “members of the Diplomatic Corps” and ambassadors “representing Muslim-majority nations.” In essence, Trump used this iftar to primarily spotlight Muslims outside this country. This selective manipulation of the guest list is simply a strategic tactic for President Trump to paint America’s relationship with Islam as just that–a foreign influence that should be held at arm’s length.

Treatment like this starkly contrasts the words President Obama chose for his speech during the White House iftar two years ago, recognizing local Muslim innovators and leaders, as well as paying respect to fallen Muslims victimized by hate crimes. It is in remembrance of the grace, eloquence, and respect with which he spoke that shows it is more important to call attention to Muslims who have made a real difference in our country than it is to point out yet another instance where Trump has changed his tune for his own benefit. People like Kareem Abdul Jabbar, Malcolm X, Muhammad Ali, and Ibtihaj Muhammad, who have all used their various platforms to change the tune of how Muslims are perceived and fight for what is right. Like Representatives Keith Ellison, Andre Carson, and other Muslims designing legislation, and Dr. Ayub K. Ommaya, Ahmad Hassan Zewail, and Fazlur Rahman Khan, who changed the scientific and architectural worlds. These American Muslims, as well as other individuals dating back to the time of the Revolutionary War, have helped to shape this country into what it is today.

In a time where even our President appears to only see Muslim contributions to America from an external standpoint, it is imperative now more than ever to recognize the vast number of Muslim contributors throughout American history, as well as those who continue to do so. For this reason, it is imperative to call our attention to House Resolution 869, a resolution presented by Congresswoman Judy Chu that recognizes all the aforementioned individuals and more for their contributions to the US. It is very easy for people to get frustrated by President Trump’s actions and inactions, but in the interest of changing the narrative towards the positive side of Muslim presence that has been grossly ignored in favor of fear-mongering tactics, pushing for passing this resolution is an imperative first step towards further necessary legislation and overall acceptance.