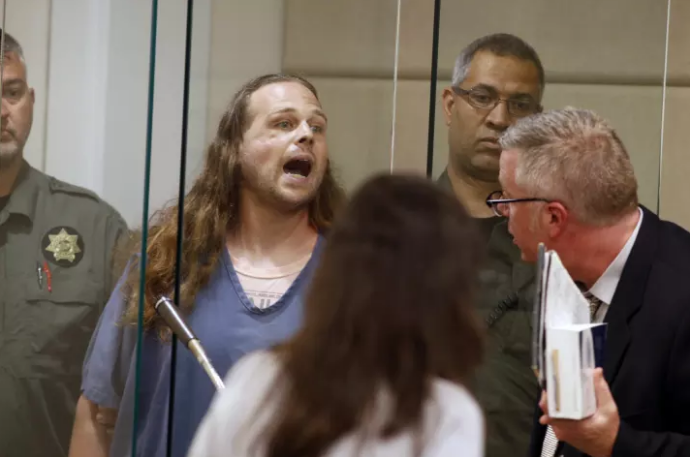 The man accused of killing an Army veteran and a recent college graduate on a Portland train shouted about patriotism, free speech, and the enemies of America in his first court appearance on Tuesday.

Jeremy Christian, a 35-year-old known locally as a white supremacist, was scheduled to be arraigned on charges that include aggravated murder. He was charged in Friday’s killings of 53-year-old Ricky John Best and 23-year-old Taliesin Myrddin Namkai Meche, two men who stood up to Christian as he yelled at a Muslim teenager and her black friend.

As deputies led him into the courtroom, Christian began to rant.

“Free speech or die,” he shouted. “This is America. Get out if you don’t like free speech.”

“You call it terrorism, I call it patriotism,” he continued.

He continued calling for death to the “enemies of America,” including anti-fascists. Several men who appeared to be antifa protesters stood outside the hearing, and as a friend of Christian’s from prison arrived, they chased him away.

The friend, who identified himself as Jamie, said he had known Christian for 15 years and they were both homeless.

“If I went and got in some shit I’d want someone to stand by me,” he said outside the courthouse.

He denied being a neo-Nazi, but he added, “I’ve fought and bled for my race.”

As people outside the courtroom began to shout, deputies led Christian away through the secure back door. He did not enter a plea, and the judge moved on to hear other cases.

In the audience was Micah Fletcher, who also tried to intervene in Friday’s attack and was injured. Stitches and bruising were visible on his neck; Christian had slashed at all three men’s throats, according to people at the scene.

An affidavit obtained by The Oregonian on Tuesday offered more details on the attack.

According to the affidavit, Christian entered the train at 4:19 p.m. Friday. Two black teenagers, one of whom was wearing a hijab, were already on the train and he began shouting at them.

“Get the fuck out!” Christian said, according to the affidavit. “Pay taxes!”

“I don’t care if you are ISIS,” the affidavit continued. “Fuck Saudi Arabia.”

All the while, he was drinking sangria wine from a plastic container, the affidavit said. One man intervened and tried to verbally de-escalate the situation, the affidavit said. But Christian continued shouting, including a statement about “decapitating heads,” the man later told police.

Christian then began stabbing at the man with a knife that had been concealed in his hand, according to the affidavit. When Best moved forward to intervene, he too was stabbed.

Christian allegedly threatened other passengers as he got off the train.

In the squad car, police recorders captured statements by Christian, the affidavit said according to Willamette Week.

“I told him, ‘You ain’t gonna heal, punk,'” Christian said, according to the affidavit. “And he still wants to put his hands on me. Die bitch. Fucking die. Stupid motherfucker. That’s what liberalism gets you.”

“I hope they all die,” Christian said, according to the affidavit. “I’m gonna say that on the stand. I’m a patriot and I hope everyone I stabbed died.”