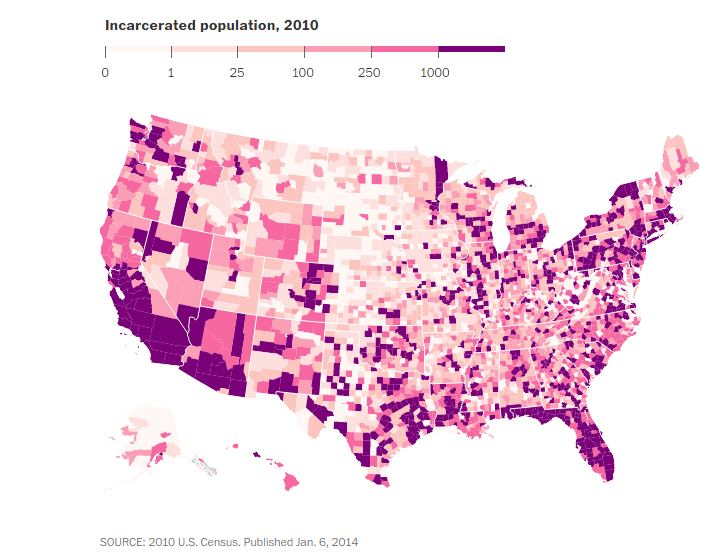 There were 2.3 million prisoners in the U.S. as of the 2010 Census. It’s often been remarked that our national incarceration rate of 707 adults per every 100,000 residents is the highest in the world, by a huge margin.

We tend to focus less on where we’re putting all those people. But the 2010 Census tallied the location of every adult and juvenile prisoner in the United States. If we were to put them all on a map, this is what they would look like:

The map shows the raw number of prisoners in each U.S. county as of the 2010 Census. Much of the discussion of regional prison population only centers around inmates in our 1,800 state and federal correctional facilities. But at any given time, hundreds of thousands more individuals are locked up in the nation’s 3,200 local and county jails. This map includes these individuals as well.

To put these figures in context, we have slightly more jails and prisons in the U.S. — 5,000 plus — than we do degree-granting colleges and universities. In many parts of America, particularly the South, there are more people living in prisons than on college campuses.

As you can see in the map, states differ in the extent to which they spread their correctional populations out geographically. Florida, Arizona and California stand out as states with sizeable corrections populations in just about every county. States in the midwest, on the other hand, tend to have concentrated populations in just a handful of counties. Prisons tend to leave an unmistakeable mark on the landscape, as artist Josh Begley has documented.

Because of the mix of state, federal and local correctional facilities in each county, it doesn’t make sense to express these numbers as a rate — X prisoners per Y number of adults. The presence of a federal or state facility in a given county will greatly inflate that county’s prisoner count relative to the general population. And in many instances, large correctional facilities are located in sparsely populated regions, like Northern New York. In some of these counties, prisons account for 10, 20 or 30 percent of the total population.

In recent years criminal justice reform has risen to prominence in the national conversation, with both Democrats and Republicans looking for ways to dial back the incarceration-focused policies of the ’80s and ’90s. This map shows one reason why the issue is gaining traction: prisoners are literally every where you look in the U.S. Nearly 85 percent of U.S. counties are home to some number of incarcerated individuals. Localities spend tens of thousands of dollars per prisoner each year — and often much more than that — to house, feed and provide them with medical care. Most counties would doubtless prefer to spend this money elsewhere.