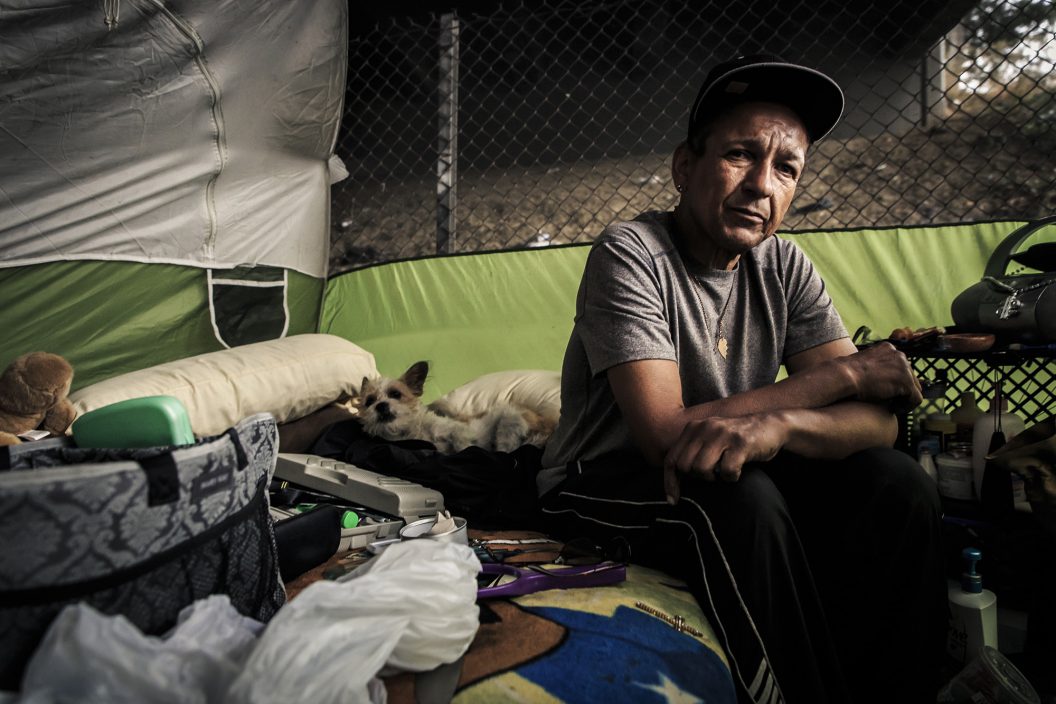 A year ago he slept in his own apartment, but today Charles Jackson sleeps under a bridge bordering Silver Lake, one of the more fashionable neighborhoods in Los Angeles. A few dozen strangers share the encampment; some become neighbors, while others come and go. Jackson wants to get off the streets, but as many of those who live on the margins have found, it is easier to lose a home than find another.

“People say, ‘This is going to be temporary, you know, until I get out from under this rock,’” he told me. A kind-looking brown-eyed man in his mid-50s, Jackson stands in front of the tent he lives in, looking away as we talk, his voice barely louder than a whisper. Beside us, Jackson’s white-and-tan terrier, Ozzie — well-groomed and clearly beloved — pokes his nose out from the front of the tent, panting in the midday sun. “Two years pass by, four, five years pass by; before you know it, you’re ten years homeless in the streets because out here, time is nothing. You get to not know what day it is, what month it is.”

Life on the streets, he said, “grows on you.” His well-stocked tent is evidence of this. There’s a full-size mattress, a stool, a big jug of water, pots and pans — the makings of an apartment, underneath a bridge.

Jackson, originally from Chicago, came to live under the bridge after serving nine months of a two-year prison sentence for possession of crack cocaine. He got out early thanks to California’s Proposition 47, a 2014 measure that reduced most drug possession cases from a felony to a misdemeanor. He’s clean now, he said, but many of those around him use drugs. The influences that come with his living environment, Jackson said, were not making the road to recovery any easier.

In the last couple of years there has been a significant increase in homelessness around Los Angeles. According to the U.S. Department of Housing and Urban Development, the city, with its Mediterranean climate and 300 days of a sunshine a year, is second only to New York City when it comes to its population of people without homes.  Since 2013, the number has increased by at least 12 percent across Los Angeles county, according to a biannual count conducted by the Los Angeles Homeless Services Authority. In the areas served by the authority, 41,174 people are homeless, only a third of whom live in shelters or transitional housing. In the city itself, 9,535 people are homeless.

“There’s clearly a crisis,” said Maria Foscarinis, founder and executive director of the National Law Center on Homelessness & Poverty, a nonprofit based in Washington, D.C. It is not one confined to Southern California. Nationally, according to her organization, “at least 2.5 to 3.5 million Americans sleep in shelters, transitional housing, and public places not meant for human habitation” each year; another 7.4 million Americans have lost their homes and are living precariously, “doubled-up with family or friends.” On any given night, at least 578,000 people sleep on the street, according to federal numbers. As the number of people living in poverty jumped nearly 20 percent over the last decade, the country lost about 10,000 units  of affordable public housing annually.

These figures are sobering, but in Los Angeles advocates for the homeless point to an even more disturbing trend: the increasing criminalization of people without homes. Public officials and business leaders “are looking for a quick fix,” Foscarinis told me, and while imprisoning a homeless person may cost more than securing his or her housing, hauling someone away and out of sight creates the appearance of doing something. On June 16, the city council voted 14-1 to make it easier to confiscate the possessions of homeless people, reducing the three-day notice currently required to 24 hours (and subjecting bulky items, such as mattresses, to immediate removal). The move was finalized a week later, with the support of Mayor Eric Garcetti, though on July 22 he called for these measures to be enforced compassionately. Responding to the complaints of property owners in Venice, the city is also looking to reinstate a ban on living in vehicles.

“The de facto policy on homelessness in L.A. is enforcement and criminalization,” said Eric Ares, an organizer with the Los Angeles Community Action Network, a group on skid row that advocates for the homeless. Ares sees the mayor’s call for compassion as empty rhetoric that distracts attention from what the city could be doing. “At this point it’s no secret what the solution is: it’s housing and services,” Ares said. “But what we’re seeing is — and this has been going on for at least 10 years, particularly in the gentrifying parts of Los Angeles — a blank check for policing.”

Charles Jackson has experienced this aggressive policing firsthand. Downtown, cops regularly do what he calls “jump-outs,” where they grab you and “get you up against the wall,” he said, searching for any contraband that might justify a citation or stint in jail. More than half the $100 million a year L.A. spends combatting homelessness — as much as $87.3 million — goes to the police, who use it to patrol homeless communities and put people in jail. In 2013, the Los Angeles Police Department arrested 15,000 homeless people, accounting for 14 percent of all arrests. (Neither the mayor’s office nor the LAPD responded to several requests for comment.)

In 2014, the L.A. County Department of Health Services proposed converting a dilapidated hotel in downtown L.A. into housing for those who lack it, complete with in-house mental health care and substance abuse treatment. It’s a proven model carried out most successfully in Salt Lake City, where the number of people living on the streets has declined 72 percentsince officials there realized it costs a third as much to house the poor as it does to criminalize them. In L.A. the plan was defeated amid vocal opposition from developers and property owners. Rather than housing for the poor, the area needed, the president of the downtown neighborhood council told the Los Angeles Times, was a boutique hotel.

L.A. is not alone in treating the side effects of housing insecurity as a crime.According to the National Law Center, around the country there has been a 60 percent increase in city-wide bans on camping in public, and a 119 percent increase in bans on sleeping in vehicles since 2011. “This is a trend,” says Foscarinis. “In many cities, there’s a misguided view that ‘doing something’ means passing a law that makes it a crime to be homeless. Clearly that doesn’t work.”

Indeed, while cities are busy treating symptoms, the root of the problem is not that hard to figure out: People most often become homeless when they do not have enough money to live in a home — and so long as that is not addressed, the problem will persist. The homeless authority in L.A., which oversees the city’s shelters and services for those living on the streets, has been clear about this; the authority traced increases in homelessness to lingering effects of the economic recession and what it called “the trifecta of unemployment, stagnant wages and a lack of affordable housing.” (A spokesperson for the homeless authority did not respond to an interview request.)

City officials say the right things. “Ending homelessness is one of my top priorities as mayor,” said Garcetti, a Democrat who took office in 2013. Last year, he pledged to end veteran homelessness in L.A. within 17 months. That was 11 months ago — and the number of homeless veterans has not gone down at all. (That initiative, while laudable, also sends a troubling message: that some of those without homes are more worthy of help than others.)

The city does provide services for the homeless, of course, but advocates say those services are underfunded and not always attainable in practice. “I’ve known people who have been on Section 8 [public housing] wait lists for literally 8 to 10 years,” said Ares. Meanwhile, while the vacancy rate in L.A. is set to drop to an historic low of 2 percent, meaning that each unit available to rent in what one study calls the “most unaffordable rental market in the nation” has a line of applicants who can pay out of pocket. For those with Section 8 vouchers, “it’s difficult … to locate units right now,” according to the director of the city’s program, and if they can’t find a unit within six months of getting the voucher they lose it — as happens to a quarter of those lucky enough to receive them.

When I spoke to Jackson outside his tent, he told me he moved away from downtown to avoid police harassment. “I’ve been to a lot of cities and a lot of states,” Jackson said. “The Los Angeles police? They are a joke. I’ve seen some of the pettiest stuff I have ever seen out here in California.” He showed me a citation he received the day before when he said police came by, lined him up alongside a dozen of his neighbors, then cited them for blocking the sidewalk. The citation means Jackson will have to go to court — and “that’s the cycle,” he said, one of the many ways homeless people get caught up in the criminal justice system. “They might intend to show up, but they don’t,” he told me. “It then turns into a warrant and then you’re going to the county jail.”

It’s only getting worse, according to Eres. In addition to the new laws, police are stepping up enforcement of older laws, particularly downtown. The effect is not to decrease homelessness, but to push it somewhere else, to make it another neighborhood’s problem, until those residents complain and people without homes must again move on. “We’re seeing more and more laws being passed that end up, practically speaking, punishing people for being homeless; punishing people that have no other options,” said Ares.

The emphasis on policing can also have deadly consequences. LAPD officers have recently killed several homeless people in a spate of incidents that have not yet led to any consequences for those in uniform. In July 2014, officers shot bean bag rounds at Carlos Ocana, a man with mental illness who had climbed up to a billboard; the aggression resulted in Ocana falling to his death. In March 2015, police shot and killed an unarmed man in his tent on skid row, Charly “Africa” Leundeu Keunang, alleging he reached for an officer’s gun, And in May, police shot and killed another unarmed man,Brendon Glenn, after responding to a report that he was harassing customers outside a bar in Venice.

For his part, Jackson understands why some residents might not like having an encampment nearby. “Not everybody here is respectful,” he told me. “The majority do meth, speed, they steal from each other,” he said, without judgment. “Their parent was most likely on drugs too.” Still, “others of us land here because of hard times,” he continued. “We fell through the cracks.”

Whenever I talk to Jackson, he says it’s time for him and Ozzie to go. “I need to move on,” he told me one of the last times we spoke. “The majority of people that are out there, they have grown comfortable in this mess.” It’s not just some of those on the streets who have achieved some level of comfort with their situation, a commentary on the human ability to adapt to trying circumstances, but the rest of us — the housed majority — who have accepted a status quo that treats the homeless as little more than a human nuisance, their inconvenient existence reduced in practice to the threat they allegedly pose to property and commerce.

“If you have nowhere to go,” Ares told me, “by virtue of your not being able to go anywhere you’re breaking the law.” In L.A. and cities across the United States, it is effectively illegal to be dirt poor in a country where more than 45 million people live in poverty. “We can’t arrest our way out of this problem,”said Ares. For now, though, we’ll keep trying.