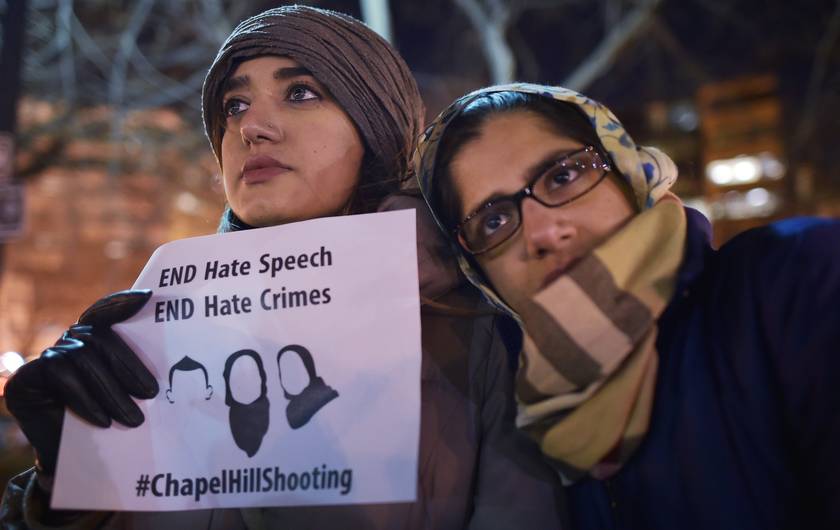 The shooting deaths of three Muslim university students last week in Chapel Hill, North Carolina, has ignited a firestorm of debate about the killer’s motives. According to his neighbors, Craig Stephen Hicks, the 46-year-old charged with murdering Deah Barakat, Yusor Abu-Salha and Razan Abu-Salha, was an angry man hostile towards religion, irritated by noise in his apartment complex and testy when it came to parking spots, the New York Timesreports.

On Monday, a grand jury indicted Hicks on three counts on murder. The FBI opened a “preliminary inquiry” into the possibility of federal law violations.

But could it be, some are asking, that Hicks simply snapped? That this was not a hate crime motivated by underlying anti-Muslim animus, but rather was the tragic ending to a simple misunderstanding over noisy neighbors who parked in the wrong space?

The idea that a parking dispute would trigger such senseless violence isn’t farfetched in today’s America. But bringing up things like “parking disputes” in order to avoid conversations about deep-seated prejudices isn’t unheard of, either. In fact, “parking concerns” are a pretext that seems to plague the American Muslim community, especially when mosques are involved.

In November, residents of Des Plaines, Illinois, packed a city council meeting to express their annoyance over a local mosque’s plans to expand its parking lot.

“Mosque parking” has also been a hot-button issue in a Michigan town.

And in an Oklahoma town.

And in New York, it wasn’t just “parking” that bothered some people; they also took issue with Muslim cab drivers who audaciously double-parked their taxis on the street while they prayed.

The Garden State has had its share of #parkingwhileMuslim problems.

New Hampshire has, too.

And for the love of God, let’s not forget Virginia.

That state may be “for lovers,” but according to one virulently anti-Muslim website, it’s also where the followers of Islam are waging a “parking jihad.” In Georgia, citizens who held “Ban Islam!” signs ahead of a city council vote on whether or not to allow a Muslim group to rent space for weekly worship had an opportunity to speak once the meeting started. What did they cite as their concern? Too many benevolent and faithful Muslims spreading goodwill and hospitality in their community? Nope. It was parking.

It doesn’t take an encyclopedia’s worth of examples to prove there’s a pattern of displacement and deflection.

Not in the context of a poisonous climate of anti-Muslim prejudice.

Not in a country where hate crimes that target Muslim communities are five times more common than they were after 9/11.

Not amid a wave of mosque vandalisms, and hysterias about Sharia law and “no-go zones.”

Not in a land where moneyed elite sideline university calls to prayer, and Hollywood gunslingers sensationalize sniper flicks that ignite anti-Muslim hate speech on the Internet.

In the week that has passed since Hicks’ rampage, a Houston man set an Islamic center on fire; two Dearborn, Michigan, men beat a Muslim father who was grocery shopping with his kids at Kroger; vandals spray-painted the words “Fuck Allah” and “Now this is a hate crime” on the walls of a Rhode Island Islamic school; a Washington state Hindu temple was mistaken for a mosque by criminals who emblazoned it — and a local junior high school — with the words “Muslims get out;” and two men were stabbed outside of a Michigan shopping mall in what police are considering a religiously motivated hate crime.

Yet here we are, considering the possibility that the only thought running through Hicks’ mind as he unloaded his gun on three innocent Muslims was concern over where he would park his car.

Here we are living in a country where it takes tragedies of this kind to spur social media reminders that #BlackLivesMatter and #MuslimLivesMatter.

Here we are, where the lives of minority groups are so devalued that before conversations about prejudice against them can ever begin, we look for excuses.

“Obesity.” “Asthma.” “Headlock.” “Thuggery.” “Troublemaker” And, now, “parking.” We explain away violence that targets minority communities, and it has to stop. If we are serious about ending that violence, we’ll examine the climate of prejudice that breeds it, and we’ll quit looking for alternative explanations that make us feel better about the tragedies by placing partial blame on the victims.

Calling the North Carolina murders a “parking dispute” is an abomination. It’s an indicator of the real social cancer tearing apart the soul of this country.