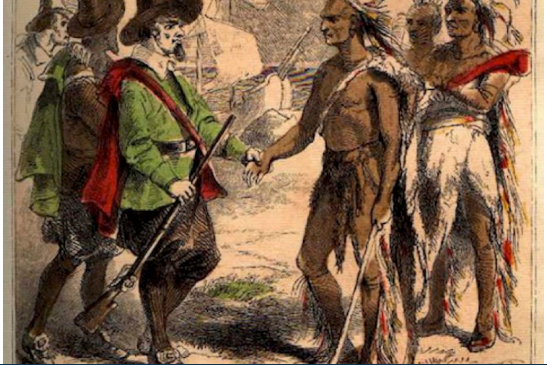 Thanksgiving is a holiday that many equate with family, food, and being grateful for what one has. A federal holiday, Thanksgiving is celebrated to mark early colonists (pilgrims) supposed feast with Native Americans. The reality, however, is far from this.

Thanksgiving is known to have originated from the encounters that white colonists had with the indigenous Wampanoag tribe in the Cape Cod area. The English colonists established a colony in this area in the 1600s. The Wampanoag were successful hunters, farmers, and fishermen. The first official mention of “Thanksgiving” was in 1637, when the colonists massacred a Pequot village. They celebrated this “victory with the feast. Over 500 Pequot men, women, and children were killed, their village burned to the ground.

In the book, Thanksgiving: The Biography of an American Holiday, by James Baker, the TIMES author Dan Koeck writes, “when the United States became a global power rife with industrialization and urbanization. It saw a rise in nationalism, as European immigrants poured into the country, and the Protestant Americans who’d massacred indigenous people feared being displaced. Colonial ideology became the identity of what it was to be truly ‘American,’ and they began implementing teachings to clearly define ‘Americanism’ for the new immigrants. One of these was the sanitized story of Thanksgiving — which fabricated a peaceful depiction between the colonizers and the tribes and neglected to mention the amount of death, destruction and land-grabbing that occurs against the first peoples, setting the tone for the next 200 years. By 1920, writes Baker, the story of ‘pilgrims and Indians’ became a story every American school child was taught, even in Native schools.

For many indigenous people, Thanksgiving is a day of mourning. It marks the ongoing genocide of indigenous people, the destruction of land, and the erasure of the horrific history of oppression and genocide. In Plymouth, people gather for an organized rally of mourning on Thanksgiving. They say, “Thanksgiving day is a reminder of the genocide of millions of Native people, the theft of Native lands, and the relentless assault on Native culture. Participants in National Day of Mourning honor Native ancestors and the struggles of Native peoples to survive today. It is a day of remembrance and spiritual connection as well as a protest of the racism and oppression which Native Americans continue to experience.”

This Thanksgiving, take time to learn about the land that you are on, the history of it, who it belonged to. Learn about indigenous perspectives on the holiday. Advocate for indigenous issues, such as the ICWA and MMIW. Amplify and prioritize Native voices and perspectives.