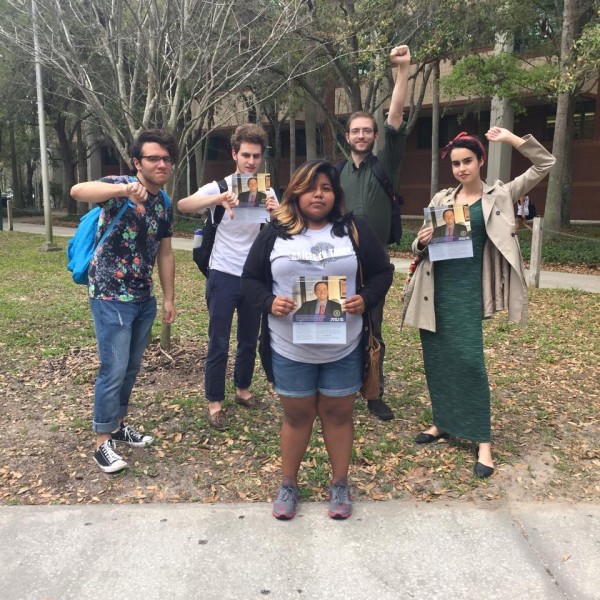 Tampa, FL – On March 10, members of Tampa Students for a Democratic Society disrupted an FBI recruiting event at the University of South Florida (USF). The FBI claimed the event was part of Women’s History Month, their goal being to recruit young women as agents of repression. The FBI continues to threaten important women leaders such as Assata Shakur, who is living in exile in Cuba. In the case of the Anti-war 23, many women anti-war leaders were spied upon for two years and then the FBI raided their homes, in a clear case of political repression.

The FBI recruitment presentation came to a quick halt when students rose from their chairs and disrupted the FBI speaker. One student called out, with the other students echoing their words to drown out the FBI. This is known as a mic check, popularized during the Occupy Wall Street demonstrations. The students then chanted “FBI out of our mosques, FBI out of our schools!” and walked out.

Sam Beutler, of Students for a Democratic Society said, “The U.S. government is a threat to people around the world, and that includes us within its borders. We need to fight the FBI in the belly of the beast.”

“The FBI is attempting to recruit students at USF by glorifying their repressive practices as ‘protecting America’s security.’ The manner in which they swept aside the FBI’s historic repression against both women and students shows the lack of respect that they have for our student body. Students need to unite to fight these reactionary forces on every campus,” explained Danya Zituni, also with SDS.

As the FBI seeks to recruit spies at USF, Tampa Students for a Democratic Society is continuing to shine a light on political repression and religious persecution committed by the FBI.