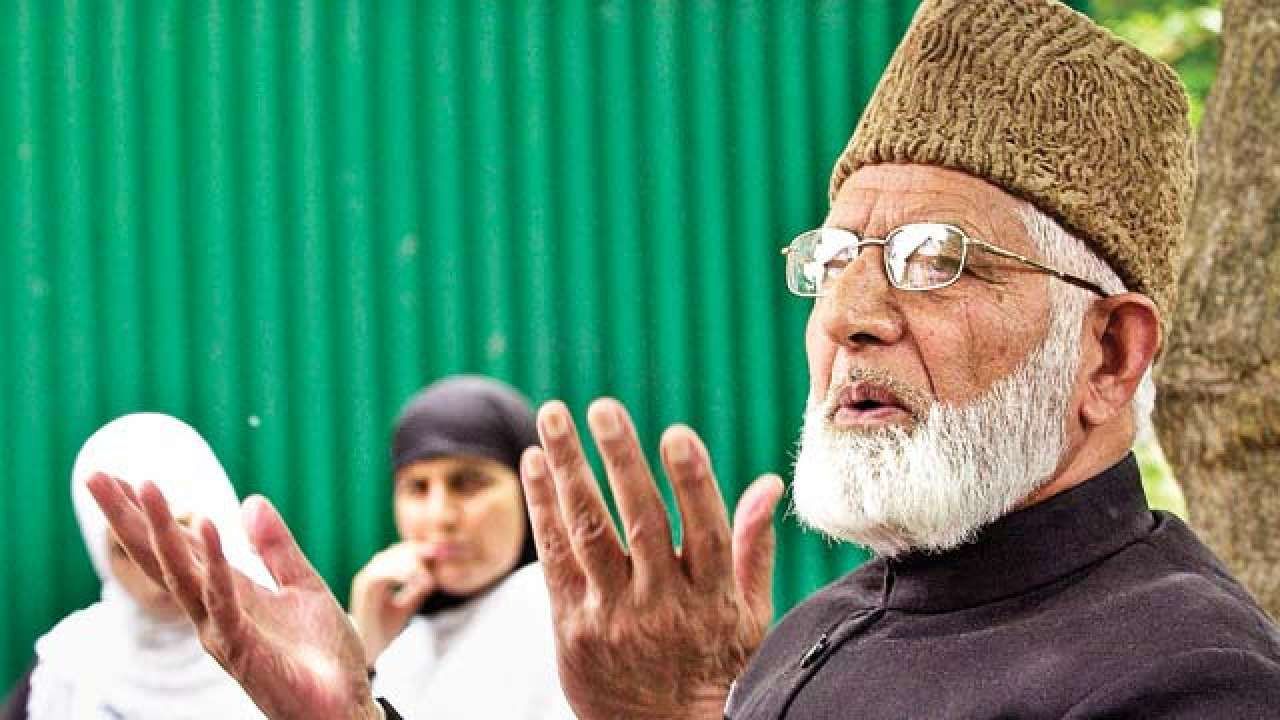 On September 1, 2021, at 10:30 PM Kashmir time, former Tehreek-e-Hurriyat chairman Syed Ali Shah Geelani passed away at the age of 92, after a long illness and under an 11-year house arrest at his home in Srinagar, Kashmir. At the last report the security forces are reported to be cordoning off his residence and holding the bereaved family under duress and demanding that they turn over the body of the revered leader to the Indian security forces to bury him in the dark of night out of public sight.

Indian-occupied Jammu and Kashmir has been placed under lockdown, to prevent Kashmiri masses from expressing their public grief and give their national hero his final farewell he deserves.

The World Kashmir Awareness Forum is appealing all Mosques and Islamic centers around the world to observe this Friday as a day of mourning, and to hold funeral prayers for the leader after the Friday prayers.

The following article was originally published in the March/April issue of Islamic Horizons. It has been updated to reflect and commemorate Mr. Geelani’s passing.

I first met Syed Ali Shah Geelani (1929-2021) in 1963 as a college freshman in Sopore, the famous north-central Kashmiri college town.

Sopore, the bustling center of the state’s apple industry and regional commerce, was then—and for decades has been—the epicenter of the Kashmiri freedom struggle. Sopore has always stood out for its defiance against India’s colonialist occupation.

Geelani’s character, personality, demeanor and, above all, his spectacular oratory in Kashmiri and Urdu made an impression on youth and adults alike. I was no exception. By the time I met him, he was already becoming an iconic political and religious figure among college students. Later on, during my medical college years in Srinagar, the summer capital of Jammu and Kashmir (J&K), I met him several times.

In 1971, Geelani was elected to the [Indian-occupied] J&K Legislative Assembly on the Jamaat-e-Islami J&K ticket (banned by India in 2019). By then he had matured as a political leader with an increasingly crystallized view of Kashmir’s destiny. He wanted to settle for nothing less than the right to self-determination enshrined in the UN Security Council’s Resolution 47, adopted on April 21, 1948, and on Jan. 5, 1949, which stated that “The question of the accession of the State of Jammu and Kashmir to India or Pakistan will be decided through the democratic method of a free and impartial plebiscite”.

Unfortunately, Shaikh Mohammad Abdullah (1905-1982) essentially abandoned this cause after spending 11 years in Indian prisons. Known as “Sher-e-Kashmir” (the Lion of Kashmir), Abdullah was one of the founding leaders of the All Jammu & Kashmir Muslim Conference which he left. He then founded the Jammu and Kashmir National Conference, and then served as the first post-occupation elected Prime minister of Jammu and Kashmir until 1953 when India deposed and imprisoned him. A strong opponent of Hari Singh’s rule and an outspoken advocate of self-rule, he was eventually broken by 11 years of harsh prison treatment. That would be the first act of decapitation of political leadership of those Kashmiris living under Indian rule.

Geelani was never a big talker and almost never resorted to public rhetoric and argument. But when he came on the public stage to speak, he was prolific, thoughtful and thunderous. His speeches were a piece of art, a flowery mix of Kashmiri and Urdu —interspersed with Quranic verses, examples from the Hadith and couplets of the great poet-philosophers—Iqbal and Rumi.

His speeches would start softly with his hands humbly folded below his chest. His voice would gradually rise to a crescendo, and then his hands would start moving rhythmically with the cadence of his speech. He was a master of his own solo orchestra, for the audience swayed and sobbed, sometimes audibly and nearly always with eyes welling up with tears. Then, towards the end of his speech his voice would slowly de-crescendo, as if to gently land his audience because it would be time to let his admiring audience to go home. There would often be calls of “Encore! Encore!” and he would oblige, only because his beloved youth always wanted more.

Geelani was never audacious, pompous, or pungent. Just the opposite. Even at the peak of his political career and vibrancy, he was always gentle and humble. Like many other students, I also recall once walking with him for a few hundred yards in Sopore’s busy bazaar. People would often stop him, and he would oblige, He would hug them, and shake their hands. I remember that he would make a point to walk toward the Hindu and Sikh shopkeepers to greet them. They would rise and rush to hug him and shake hands—as if they were bosom brothers or friends.

Geelani was not a worldly man, but a man of tremendous civility, sophistication and finesse. He was a remarkable blend of resistance, resilience and accommodation. When it came to principles, he was uncompromising, but on matters of personal choice he was accommodating and deferential.

In 1981, some of us had the privilege of hosting him in Ohio when he was invited to address the annual ISNA Convention. We got a chance to see him up close. We found him respectful to all. He treated women with kindness and fatherly affection.

Geelani was a profound scholar, an intellectual, a writer and, above all, a political leader who would not compromise on the Kashmiris’ right to self-determination. A fearless warrior for peace, justice and equity he was never intimidated by the force of Indian tools of terror. He never picked up a gun or promote wanton violence even against his tormentors.

He defended the rights of all illegally occupied nations to take all necessary measures allowed within international law and norms, to free themselves from their oppressors.

Everything he ever wrote — his 30 books, including his autobiography, Wular Kinaray (by the Bank of River Wular)–Millat Publications, 2012), which he penned down during his internment in Indian prisons — gives one a deep insight into his view of humanity. He was imprisoned for more than 12 years on aggregate since his first arrest in 1962. He repeatedly addressed his Hindu Indian tormentors with dignity and respect while they repeatedly humiliated him as if he were a hardened criminal.

His political outlook was simply one of not just ending the world’s many conflicts—ranging from Kashmir to Palestine and beyond, but also of eliminating their underlying causes. He believed that violence will end only when tyranny ends. But he also believed that the innocent should never be targeted, no matter how sacred the cause.

In the case of Kashmir, Geelani believed that the people of J&K must be allowed to exercise their UN-mandated right to self-determination. He frequently invoked the solemn pledge of India’s first Prime minister, Jawaharlal Nehru (1889-1964), to let the Kashmiris determine their own political future through a free and fair plebiscite.

While he was not against bilateral dialogue between India and Pakistan, he maintained that dialogue should be a means to set the stage for the rightful representatives of J&K to determine their fate. Neither India nor Pakistan, or any single political grouping in J&K, should be given the right to decide the now-divided state’s future.

Changing the course or the narrative of the Kashmiri freedom struggle, 73 years on, does not guarantee any better results. The UNSC resolutions provide a critical international justification for waging the Kashmiri struggle. Although the struggle has been so long, the cause is finally attracting more attention, and the world is more aware of the cause that Geelani struggled for. Moreover, Geelani’s decision to not give up on the UN has been right all along.

Pro-Indian client politicians like those in the People’s Alliance for Gupkar Declaration (PAGD; formerly known as Gupkar Declaration) founded by the dynastic politicians Farooq Abdullah (Jammu & Kashmir National Conference) and Mehbooba Mufti (People’s Democratic Party), have no credibility among the masses. They have always been a sideshow of the real freedom struggle as beneficiaries of the political system imposed or tolerated by the Indian government at the expense of the Kashmiris’ legitimate aspirations.

What made Geelani the bulwark of Kashmiri resistance was his vision, faith, courage and constancy — his lifelong sacrifice for the cherished cause of Kashmir. He did not entertain fear of India. Nor did hurdles deter him. Age did not diminish his charisma. Kashmiris around the world are mourning his devastating loss, and his steadfast guidance against the odds.

I vividly remember him whispering in my ear during a hug in 1965 at a bus stand in Sopore—soon after I had entered medical college — “We badly need the youth.” I was then 18. I am sure thousands of youths have heard that whisper. This is the message that I would like to share with my beloved youth of Kashmir everywhere. Geelani’s strength, perseverance, and unwavering hope for a brighter future lives on in all of us.