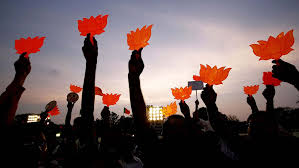 06/06/2022-Washington, DC-  Nupur Sharma and Naveen Kumar Jindal, BJP National Spokesperson and BJP Delhi Media Operation Head respectively, have both been dismissed from their positions after the former made inflammatory remarks about the Prophet Muhammad (PBUH)

In the past several months, India’s ruling party, the BJP has passed discriminatory policies against Indian Muslims and other religious minorities. These policies and the Islamophobic rhetoric in India have led to increased tensions, violence, and bloodshed. Just a couple of months ago, A state in India banned the headscarf in schools, forcing students to choose between religious freedom and their education. When students protested, Hindutva supporters responded violently, physically harming students.

Now, in light of this event, Muslim countries such as Qatar, and organizations in Saudi Arabia demanded an apology and imposed boycotts of Indian Made goods.

This Islamophobic rhetoric is harmful to the Muslims of India, who face violence and discrimination based on their religion.

We demand that the BJP government, including Prime Minister Narendra Modi, apologize for the words, and the actions of the BJP that have undercut religious freedom and security in India.

It is time that the BJP take accountability for the harm they have caused Muslims and religious minorities living in India, and uphold the values of religious freedom and civil liberties for all.