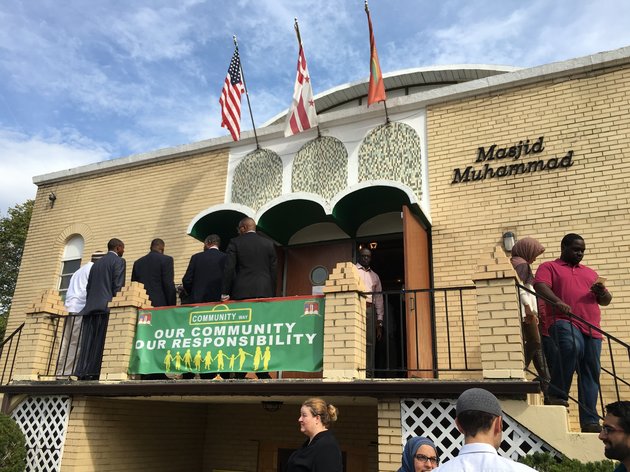 A loosely affiliated group of armed protestors organized anti-Muslim hate rallies across the country on Friday and Saturday. But instead of dividing the communities they targeted, news about the rallies strengthened bonds between interfaith allies and inspired numerous acts of community service around the U.S.

Grassroots organizers behind the so-called “Global Rally For Humanity” used Facebook to encourage “fellow patriots” to protest Islam outside their local mosques and Muslim community centers. On some pages, the protests were billed as “open carry” events and participants were encouraged to come armed with guns.

Although up to 35 Facebook pages were created in support of the rally, according to the anti-bigotry group Center for New Community, the majority of these were deactivated in the days leading up to Friday.

And in an extraordinary show of solidarity, interfaith networks in neighborhoods across America and online stepped up to show their support for their Muslim friends.

A protest scheduled to happen in front of the Islamic Center of America in Dearborn, Michigan, had to relocate to the grounds of a public library because the organizers hadn’t gained a permit, according to Arab American News. Fewer than 10 protestors reportedly showed up, four carrying weapons. Counterprotestors spent time engaging in dialogue with those who seemed to have an anti-Muslim viewpoint. The two groups left after shaking hands.

Another rally was scheduled to take place at Masjid Muhammad in Washington, D.C. TheFacebook page announcing that event was later taken down. Still, a few interfaith allies attended a Friday prayer service at the mosque to make it clear that they were willing to stand alongside Muslims.

Catherine Orsborn, director of the Shoulder to Shoulder interfaith campaign, which aims to end anti-Muslim bigotry, was one of the leaders who attended the prayers. Other than a security protocol leaflet inserted into the program, she said the service went on as planned and the community didn’t seem to be on edge.

“The sermon wasn’t about the protests, it was about freedom, justice and equality,” Orsborn told The Huffington Post. “There was a fish lunch afterwards outside the masjid — I’m pretty sure if any protestors had shown up, they would have been offered fish, too.”

At Seattle’s Interfaith Community Sanctuary, Muslims, Jews, Christians and Buddhists participated in joint prayers on Friday. They screened the film “American Muslims: Facts vs. Fiction,” which presents information about the Muslim community, from how often Muslims watch television to how often they attend religious prayer services.

“In particular, the Muslims in the group were profoundly touched by the extraordinary expressions of support and unity by their non-Muslim brothers and sisters. All of us experienced a deep kinship of spirit,” Rahman, a Muslim Sufi minister, told HuffPost.

On Saturday, the Spokane Interfaith Council in Washington organized a potluck dinner at their local Islamic center. A similar interfaith community dinner is being organized at anIslamic center in Louisville, Kentucky, to “celebrate the ideals of anti-racism and anti-bigotry.”

The rallies also inspired the Council on American-Islamic Relations to launch a nationwide voter registration drive.

In Spring Hill, Florida, Muslim doctors planned to offer free checkups to anyone who walked into the Crescent Community Clinic on Saturday.

Michigan’s Muslim Community Council directed Muslims and their interfaith allies to avoid counterprotests and instead commit to serving the community. Volunteers planned to distribute clothing and school supplies to people in need at the Muslim Center in Detroit. Others signed up to plant trees and organize a youth dialogue on politics and social justice.

Online, supporters rallied under the hashtags #HateUnchecked and #LoveYourNeighbor.

Dr. Sayyid Syeed, national director of interfaith and community alliances at the Islamic Society of North America, said in a statement released to HuffPost that he was reassured and encouraged by those who were determined to show their support for Muslims during this time.

“We are proud of our allies from different faiths who have been our partners in dialogue over the years and stand with us against fear and hate,” he said.