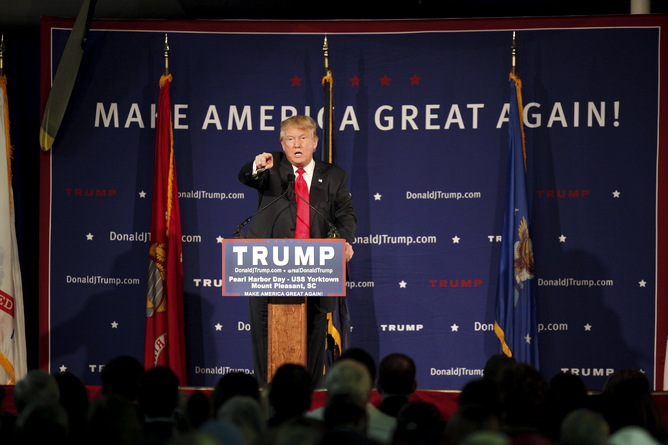 Q: Presidential candidate Donald Trump called Monday for barring all Muslims from entering the US. He previously called for surveillance against mosques and a database for all Muslims living the US. What can you tell us about the history of attacks against Muslims in the US? Are Trump’s comments unique?

Sahar Aziz is an associate professor of law at Texas A&M. She is author of Sticks and Stones, the Words That Hurt: Entrenched Stereotypes Eight Years after 9/11.

Trump’s desire to keep Muslims out of America goes back two centuries. The Naturalization Act of 1790 barred Muslims from citizenship because only white people were eligible. Muslims were viewed as either black slaves, who were not considered full persons, or Turks and Arabs who were deemed enemies of white Christianity – a hallmark of American citizenship.

Even after the end of slavery, Muslims continued to be excluded. Immigration laws in the late 19th and early 20th centuries sought to exclude Chinese, Japanese and other Asians. Whiteness was still the prerequisite for naturalized citizenship. Islam was associated with Asiatic cultures deemed antithetical to American values.

What makes the contemporary period different is the exclusive focus on Islam and Muslims as the primary threat to American life – as opposed to Muslims being caught up in anti-black or anti-Asian prejudice. Mirroring the historic racist rhetoric against the Chinese and Japanese, a critical mass of Americans view Muslims as disloyal, suspicious, dangerous and possessing a culture deemed irreconcilable with American norms.

We witnessed the manifestation of such stereotypes most acutely in the months and years immediately following the terrorist attacks on 9/11. Individuals identified as Muslim – either by their headscarves, names, national origins or associations – were assaulted, spied on, investigated or subjected to “special registration” procedures. However, the post-9/11 discrimination is not merely backlash, but rather an entrenched form of bigotry.

At a time when most Americans are taught that our nation is post-racial and that we have moved beyond Japanese internment or Chinese exclusion laws, Trump’s statements and consequent rise in the polls remind us that our nation has not advanced as much as we’d like to believe.

Muniba Saleem is assistant professor of communication studies and a faculty associate at the Institute of Social Research, University of Michigan. She is the author of Exposure to Muslims in Media and Support for Public Policies Harming Muslims.

Trump’s statement is, of course, unconstitutional and un-American.

Unfortunately, research suggests that average Americans who are exposed to negative media images of Muslims are likely to support such civil restrictions for Muslims, even if they are US citizens. Research further reveals that most non-Muslim Americans do not have personal interactions with Muslims. Research published in 2009 suggestsAmericans rely on media as their primary source of information about Muslims, which largely depicts Muslims in a negative light. Media stereotypes are especially likely to influence negative attitudes toward depicted groups when people have little real-world contact.

Denise Spellberg is professor of History and Middle Eastern Studies at the University of Texas in Austin. She is the author of Thomas Jefferson’s Qur’an: Islam and the Founders.

Nothing about Trump’s vilification of an entire American religious minority is unique. Trump’s tactics are borrowed directly from a script provided by Frank Gaffney, a known Islamophobe. Gaffney has been condemned by both the Anti-Defamation League and the Southern Poverty Law Center. Trump referenced Gaffney in his speech suggesting the US bar all Muslim immigration. He cited a poll with no verifiable results conducted by Gaffney’s organization, The Center for Security Policy.

The poll, designed to sow fear, asserted a massive untruth: “25% of American Muslims agreed that violence against Americans here in the United States is justified as a part of global jihad.” The Pew Research Center and Georgetown University debunked these claims, but the inflammatory impact lingers.

In 2010, Gaffney’s center published “Shariah: The Threat to America,” a right-wing manifesto that became popular among the Tea Party as the blueprint for nationwide anti-Sharia law bills in numerous states.

In 2008, Gaffney insisted that President Obama was born in Kenya. He said Obama “might secretly be Muslim.” Trump was a strong anti-Obama birther proponent. His birtherism extends naturally into his Islamophobia, aided by so-called “experts” whose dangerous goal it is to persuade Americans that all Muslims are the enemy within.

This baseless, fringe untruth first took on currency in the 2012 presidential election cycle, when Herman Cain suggested Muslims submit to loyalty oaths before they could serve in the US government. He forgot to read the no religious test clause of the US Constitution, Article VI, section 3.

Trump’s attacks are a predictable universalization of Gaffney’s ideas. Rather than attack individual Muslims, Trump has extended the premise. He sees all Muslims as threats.

Trump’s dangerous assumption is that American Muslims are not American and certainly not citizens. Casting this group as un- or anti-American is un-American and unconstitutional, as Muniba states. But the roots of Trump’s bigotry do have a definite ideological source origin.

Eli Clifton relates in Foreign Policy that Gaffney’s organization is well-funded – receiving $US3.55 million in 2013 and $2.04 million last year. Christopher Bail offers an excellent sociological study on how this fringe group, with no expertise in Islam as a faith or academic understanding of American Muslims as citizens, moved to the mainstream.

The message resonant with Gaffney, and now Trump, to the American electorate already filled with anxiety after the attacks in Paris, then San Bernadino: “Be afraid, be very afraid.”

Q: Prof Saleem, what kind of media depictions of Muslims are most common?

Saleem: Research reveals that Muslims, Arabs and people from the Middle East are represented as terrorists, violent, and enemies across American media including television, movies and video games.

Although these identities are distinct, Americans often confound them as one identity. Their attitudes toward these different groups are remarkably similar. Exposure to media stereotypes of Muslims and Arabs influences negative attitudes, specifically perceptions that Muslims are violent and aggressive. That, in turn, can influence aggressive behaviors toward members of these groups. In fact, the association between terrorism and Muslims and Arabs is so strong that the mention of terrorism can implicitly activate anti-Muslim and anti-Arab bias for Americans. The mere mention of terrorism – even without direct Muslim/Arab references – increases implicit bias towards Muslims and Arabs.

My research has shown that if Muslims in American media were depicted in a positive or even a neutral light, we would see a reduction in negative attitudes toward Muslims and support for harmful policies targeting Muslims.

Q: Can you speak to how Trump’s statements are affecting individuals daily lives in the Muslim American community?

Spellberg: Trump’s bigotry and fear-mongering are affecting Muslims across the US. A pig’s head was tossed at a Philadelphia mosque, the Al-Aqsa Islamic Society, on Monday. Philly’s mayor assured Muslims that they would find the “coward.”

The day before, the Austin-American Statesman reported the experience of two women in hijab who walked into a restaurant last Sunday across the street from the University of Texas at Austin, where I teach.

A male patron insulted one of the women’s parking. He then said: “She should go back to Saudi Arabia where she came from.” Both women are American citizens. Inside, the woman confronted him.

He continued: “What? You have a gun in there? Just go ahead and shoot me.” Employees at the restaurant said nothing and seated the man.

One of the women, in tears, exited the restaurant saying: “Everyone knows we were told racist things, and this restaurant doesn’t feel the need to address it because who cares about us?”

Then, somebody shouted: “Nobody.”

One of the women later wrote that she had “never felt more dehumanized and humiliated.”

Is this the result of Trump’s inflammatory rhetoric? Certainly, his anti-Muslim comments help create a climate for this type of behavior.

As Sahar’s research on stereotypes about Muslims proves: words hurt and wield power.

Are there verbal antidotes?

Maybe these from Thomas Jefferson:

“Our civil rights have no dependance on our religious opinions.”

Despite these founding American ideals, which Trump’s views undermine, many Muslims citizens feel stereotyped and marginalized in their own country.

Q: President Obama recently called ISIS “a cult of death” and charged “patriotic Muslim Americans to reject their hateful ideology.” The president said, “this is a real problem that Muslims must confront, without excuse.” Is it reasonable for the president to demand that Muslim confront Islamic extremists?

Aziz: Unfortunately, Obama’s statements succumb to Trump’s – and other Republican presidential candidates’ – bigoted narrative that Muslims are the problem. It is disingenuous for Obama to impose on Muslims the burden to stop a problem that is no more related to them individually or collectively than abortion clinic bombings are to Americans who oppose abortion.

Despite numerous terrorism studies and hundreds of antiterrorism prosecutions over the past 15 years, there is no evidence that extremist ideology has spread within Muslim communities in the United States.

To the contrary, American Muslims are for the most part mainstream, middle-class and well-educated. American mosques have not been implicated, much less criminally charged, with terrorism. Instead, terrorist suspects in the United States have either been foreign visitors (such as the 9/11 hijackers) or Americans acting in secret without the knowledge of Muslim leaders or other Muslims attending the same mosques (such as the Boston Marathon bombers and the Fort Hood shooter).

While some individuals in America may be succumbing to ISIS’ warped ideology, it is occurring privately on the internet. To expect Muslims to police each other’s actions, computer activities, and beliefs goes against our fundamental privacy values and principles of individual responsibility. Obama’s call to action sets a dangerous precedent wherein other faith communities may be held collectively responsible for individual criminal acts conducted pursuant to religious beliefs.