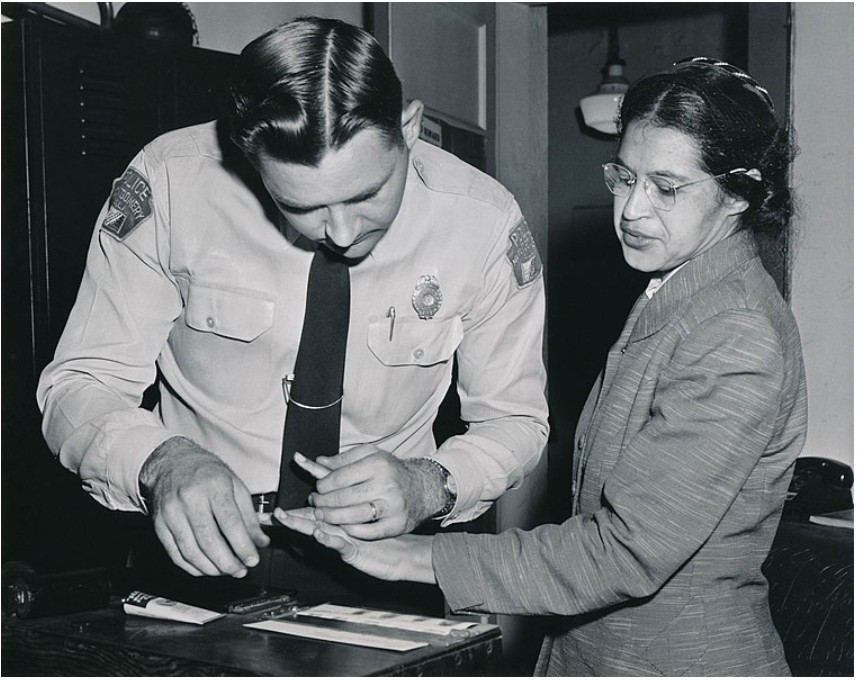 Rosa Parks became a symbol of the American Civil Rights Movement in the 1950s-1960s when she refused to give up her seat at the front of the bus for a white passenger in 1955, and was subsequently arrested. Black Americans boycotted public transportation for over a year after her arrest. The protest resulting from her actions resulted in a Supreme Court ruling that desegregated public transportation in Montgomery, Alabama.

Rosa Parks stands as a figure that is remembered again and again, yet whose legacy is often tied to her arrest after sitting in the front of the bus. Rosa Parks was a lifelong fighter for racial justice, before her arrest. Parks organized throughout Alabama against racial and sexual violence.

She also was not the first person to protest segregated seating on public transportation.

Months before Parks’ arrest, Claudette Colvin was a young 15-year old Black woman with three other Black schoolmates who was asked by a bus driver to give up their row so that a white woman could sit. Her classmates moved to the back, but Claudette stayed. The white woman refused to sit in the same row as Claudette, standing.

She told the Times, “I wanted the young African-American girls also on the bus to know that they had a right to be there, because they had paid their fare just like the white passengers. This is not slavery. We shouldn’t be asked to get up for the white people just because they are white. I just wanted them to know the Constitution didn’t say that.”

Rosa Parks stands as a symbol of the revolutionary protests that eventually led to the Civil Rights Act of 1964, which was considered a great step to treating all people equally in the United States. However, with the making of people like Rosa Parks or Martin Luther King Jr. as symbols, mainstream society creates and reinforces the sanitization of these revolutionary people. Jeanna Theoharis (author of book “A More Beautiful and Terrible History: The Uses and Misuses of Civil Rights History”) told The Intercept, “And so now the civil rights movement is used to make Americans feel good about themselves. You know, from 50th anniversary commemorations of the March on Washington, to the Selma to Montgomery march, from the dedication of King’s statue on the Mall, from the statue of Rosa Parks in Statuary Hall. All of these events have become places where we now celebrate the United States, where we feel so good about the progress we’ve made.”

White Americans feel comfortable telling Black Americans who are fighting for their right to live a humane life today to “act more like Parks, be like King” as a means to distort what the civil rights movement stood for. The civil rights movement was not a peaceful time – it consisted of people who had fought for their rights from the moment they were born to the moment they left the world, and continues today. Rosa Parks’ legacy stands as one that was pivotal, symbolic, and impactful. It instills in us to fight for racial and social justices, and that we are capable of change with hard work.