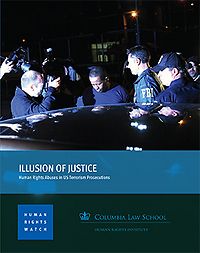 Terrorism entails horrifying acts, often resulting in terrible losses of human life. Governments have a duty under international human rights law to take reasonable measures to protect people within their jurisdictions from acts of violence. When crimes are committed, governments also have a duty to carry out impartial investigations, to identify those responsible, and to prosecute suspects before independent courts. These obligations require ensuring fairness and due process in investigations and prosecutions, as well as humane treatment of those in custody.

However, since the September 11, 2001 attacks on New York and Washington, DC, the United States government has failed to meet its international legal obligations with respect to its investigations and prosecutions of terrorism suspects, as well as its treatment of terrorism suspects in custody.

This has been true with regard to foreign terrorism suspects detained at the US military detention center at Guantanamo Bay, Cuba, most of whom are being held indefinitely without charge. And, as this report documents, it is also too often true with regard to American Muslim defendants investigated, tried, and convicted of terrorism or terrorism-related offenses in the US criminal justice system.