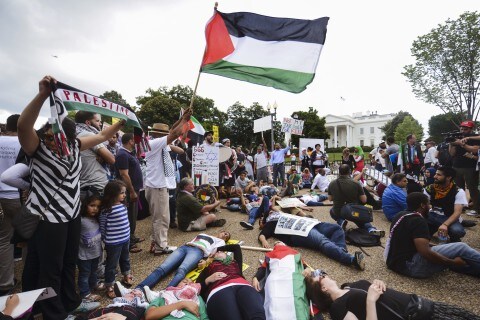 Over 50,000 marchers peacefully gathered in Washington, D.C, on Saturday, August 2, showing their support for the people of Gaza. On the same day Rallies were also held in Austin, Texas and Los Angeles, California.

The largest of these rallies was in Washington, D.C., and according to the organizers there were over 50,000 people who came from all over the country from different walks of life, young and old, against the Israeli brutality inflicted upon the people of Gaza. The marchers were also extremely unhappy with the stand of the US government and its failure to stop the Israeli Government from killing innocent civilians of Gaza.

Dr. Mohsin Ansari from ICNA spoke at the D.C. Rally. “The tide is turning” said Dr. Ansari, “its time Israel saw the writing on the wall and address the fundamental issue of occupation”.

ICNA also supported the rally in Austin, Texas which was held the same day. A massive rally was also organized in Los Angeles, California the same day in support of Gaza.

ICNA thanks all participants and hopes this powerful and new momentum will continue until a lasting and just solution in Palestine is achieved by ending the occupation.