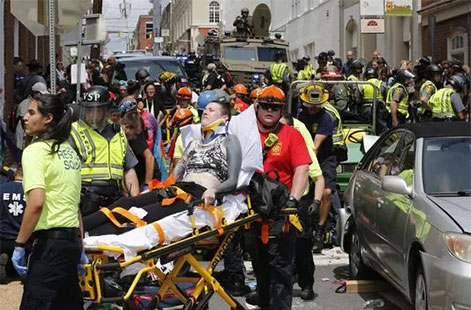 A crowd of anti-racist protestors were mowed down killing one woman and injuring 19 others. Republicans such as House Speakers Paul Ryan, Marco Rubio and Jeb Bush called this scourge out by name: white supremacist terror. However President Trump called for an end to violence and hate “…on many sides, on many sides” not acknowledging the right-wing menace our nation is facing today.

“President Trump must take responsibility for the polarized environment which he has helped to create. He can do so by condemning white nationalism and white supremacy by name.” said ICNA President Javaid Siddiqi.

In 2009, Homeland Security Director Janet Napolitano had warned America of the greatest risk for domestic terrorism which it faced as coming from white supremacy.

“We must ask why this threat is being downplayed. We must ask why president Trump won’t condemn known white supremacist leaders such as David Duke and Richard Spencer. Why does President Trump employ white nationalists such as Steven Bannon, Sebastian Gorka and Stephen Miller in key Whitehouse positions? The President and Whitehouse must also cut all ties with any affiliates of right wing extremists, white supremacists, white nationalists, alt-right, and neo-Nazis.” said Imam Khalid Griggs, ICNA Vice President.

O mankind, indeed We have created you from male and female and made you peoples and tribes that you may know one another. Indeed, the most noble of you in the sight of Allah is the most righteous of you. Indeed, Allah is Knowing and Acquainted.

ICNA is calling for the eradication of racism, hatred and bigotry in American society. The president and the White House must distance themselves immediately from white nationalism as to not take us back into the ugliest times in our country’s history.