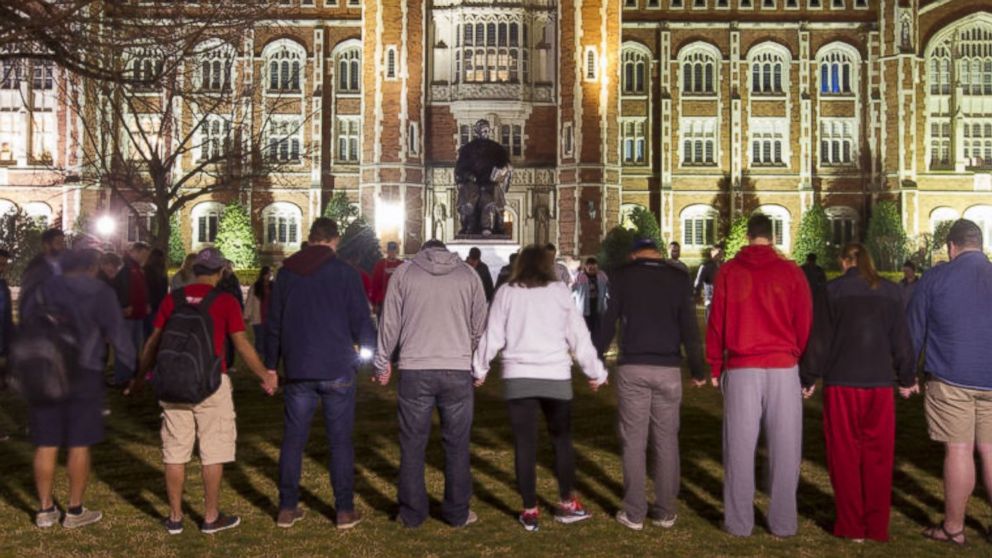 Sigma Alpha Epsilon’s national headquarters closed its chapter at the University of Oklahoma Sunday after a video emerged purportedly showing members of the chapter singing a racist chant.

The video quickly gained visibility online. It was obtained and posted to Twitter by Unheard, which describes itself as “an alliance of black students organized for change within campus administration and atmosphere.” The video shows young men on a bus chanting, “There will never be a n—-r at SAE.”

The tweet, directed at OU president David Boren, said “Racism is alive at The University of Oklahoma.”

Students at the university planned to demonstrate on the Norman, Oklahoma, campus at 7:30 a.m. local time. A prayer vigil was held Sunday night.

The frat house was vandalized overnight, defaced with graffiti.

Chelsea Davis, one of two co-directors of Unheard, said the video was recorded during the weekend. Unheard was started at the beginning of the semester to demand change, especially relating to diversity issues, Davis said.

“Clearly in that video, that is nothing new. That is nothing that just sparks up overnight. That is a chant that was well-known, well-versed, and seemed to be OK with everybody that was involved,” said Davis, a junior at the university.

Boren responded on Twitter, saying, “If the video is indeed of OU students, this behavior will not be tolerated and is contrary to all of our values.”

Brad Cohen, the national president of Sigma Alpha Epsilon, said the chapter “has immediately been placed on a cease and desist.”

In a statement, the national SAE organization said it closed the Oklahoma Kappa chapter at the University of Oklahoma and suspended all of the fraternity’s members — and the members involved with the incident could have their membership privileges revoked permanently.

“We apologize for the unacceptable and racist behavior of the individuals in the video, and we are disgusted that any member would act in such a way. Furthermore, we are embarrassed by this video and offer our empathy not only to anyone outside the organization who is offended but also to our brothers who come from a wide range of backgrounds, cultures and ethnicities,” Sigma Alpha Epsilon wrote in an online statement.