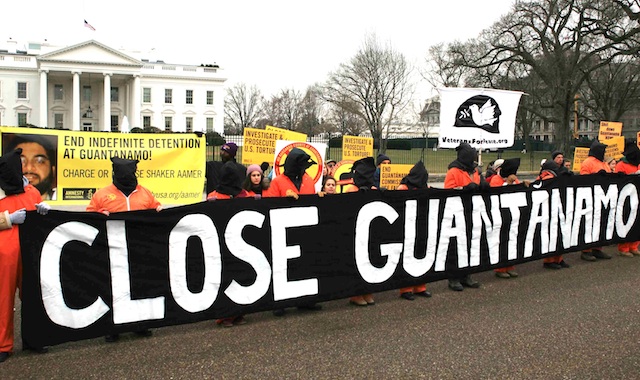 The Obama administration is nearing completion of a plan to close the U.S. military prison at Guantanamo Bay, Cuba, that it will then send to Congress, White House Press Secretary Josh Earnest said.

The plan will shutter the facility in a safe and responsible way, Earnest told reporters on Wednesday.

President Barack Obama, who leaves office in less than 18 months, has battled for years with lawmakers over his pledge to close Guantanamo by bringing to trial some detainees and holding others in the U.S. as prisoners of war, while arranging to send the least dangerous ones home or to third countries.

n recent months, the administration has sent several detainees from Guantanamo to countries including Oman and Qatar, and the U.S. is seeking additional options for transfering more prisoners, Earnest said at the White House.

President George W. Bush began using the detention facility in Cuba to hold suspected and accused terrorists after the Sept. 11, 2001, terrorist attacks on the U.S. Obama campaigned for president with a promise to close Guantanamo, saying it attracted international criticism of U.S. detention policies and interrogation practices.

Earnest said the U.S. spends more than $100 million per year on the prison, which currently houses about 116 detainees.

“There has got to be a better way for us to spend taxpayer dollars,” he said.

Some prisoners will be scheduled for transfers, while others will be reviewed on a case-by-case basis, Earnest said.

Facing congressional opposition, Obama has backed away from the executive order to close the prison that he issued the day he took office.

Congress has passed legislation restricting Obama’s ability to close the prison, and such language is included in a defense policy bill being hashed out in a House-Senate conference committee. Obama’s advisers have encouraged him to veto H.R. 1735, which reflects congressional divisions over Guantanamo.

The House adopted an amendment in its version that would add new restrictions on the ability to relocate Guantanamo Bay prisoners, including preventing transfers to Yemen. The Senate’s bill would require the administration to submit a plan to close the detention center and then provide for Congress to vote on that proposal.

While Congress has repeatedly barred the administration from closing Guantanamo, moves to shut it down are backed by Republican Senator John McCain of Arizona, the head of the Senate Armed Services Committee and a former prisoner of war in Vietnam.

The U.S. role at Guantanamo Bay has also been a sticking point as the Obama administration has moved to restore diplomatic ties with Cuba. Officials in Cuba, including the island nation’s foreign minister, have said the U.S. should end operations at Guantanamo and hand the property over to the Cuban government.

“We’ve been clear that we are not, at this stage, at all interested in changing the nature of our understanding and arrangements on Guantanamo,” she told reporters. “That’s not in the offing at the present.”