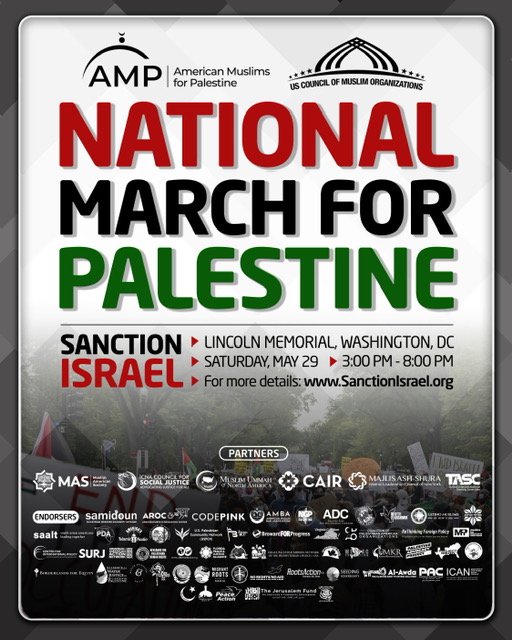 The Islamic Circle of North America’s Council for Social Justice (ICNA CSJ) invites our community of supporters to attend a national rally for Palestine on this Saturday, May 29th, 2021 in Washington, D.C. We are hosting this event with our partners, including AMP, USCMO, CAIR, MUNA, and others to raise a voice against the injustice committed by the Israeli government against the Palestinan people.

For weeks, rising tensions have led to a full scale attack on Gaza, in which hundreds of lives have been lost, most notably, the lives of young children. This violence escalated during the holy nights of Ramadan, as Palestinians were engaged in prayer. It has been accompanied by the removal of Palestinians from their homes in Sheikh Jarrah by settlers, an act that violates international law.

“As Muslims dedicated to social justice, we are asked to stand up against injustice with our actions and our voices.” Says Dr. Bukhari, Executive Director of ICNA Council for Social Justice.

We ask that you join us in boycotting Isreali products, and companies that benefit from Israel’s illegal occupation and annexation of Palestinian land. We also ask that you call your representatives, and tell them to #sanctionisrael, so that your tax dollars are not spent to murder and displace the palestinian poeple.

We are calling for a national march on Washington, DC w/ USCMO and our partners on Saturday, May 29 at 3PM starting at the Lincoln Memorial.