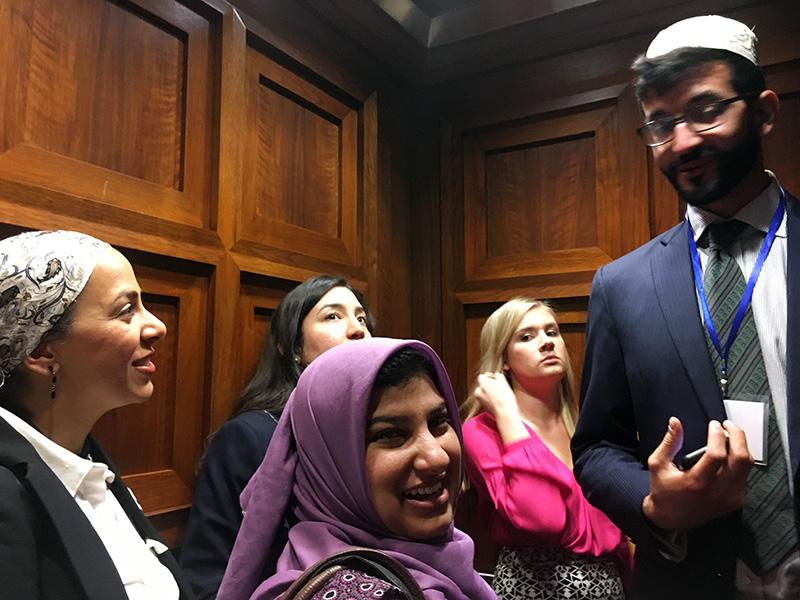 By Aysha Khan and Lauren Markoe

WASHINGTON (RNS) In the community room of  St. Mark’s Episcopal Church, the nerve center of a two-day Muslim lobbying campaign on Capitol Hill, both first-time and veteran lobbyists compared notes:

“Muslims are in catching-up mode,” said Zahid Bukhari, of the Islamic Circle of North America, one of the groups that founded the coalition that organized the lobbying days.

While other ethnic and religious minority groups have been pressing their agendas with Congress for generations, Muslim Americans are just starting to flex their growing political muscles, he said.

A report from the Institute for Social Policy and Understanding found that Muslims were the faith group least likely to vote or be registered to vote in 2016. But Muslim voter registration is increasing, and pollsters say it won’t be too long before their clout can be measured in the polls.

In the meantime, Muslims say they need to assert themselves politically outside the voting booth. In the past year they saw President Trump and like-minded politicians rail against Islamic terrorists in a way that made them fear that they too had been indicted.

And too few Americans and politicians think of American Muslims first as citizens and constituents, Muslim lobbyists say.

This week, as they navigated the labyrinth of House and Senate office buildings on either side of the Capitol, Muslims from 30 states made the case for protecting not only their civil liberties, but all Americans’.

Al-Sharif Nassef of Phildelphia’s Council on American-Islamic Relations managed to snag 15 minutes from each of two high-ranking staffers in the offices Republican Lloyd Smucker and Democrat Robert A. Brady on Tuesday morning.

Nassef told them he was there to talk about “core American values” and asked for their bosses’ support on three bills the council on Muslim organizations had asked him to talk about. Those measures would void Trump’s “Muslim ban,” prohibit denying entry to the U.S. on the basis of religion and ban the establishment of a national religious registry.

Though a legislative assistant to Brady uttered little more than “OK” and “got it” as Nassef made his case, and although he extracted no promise from her counterpart in Smucker’s office, the young lobbyist, 26, expressed satisfaction with his morning’s work.

In all, the Muslim lobbyists made more than 215 visits to House and Senate offices this week — including a few in which they talked with actual members of Congress.

They did not meet Sen. Ted Cruz, the Republican senator from Texas and onetime presidential candidate whom the group had called out last year for failing to set up a meeting with them.

One lobbyist said Cruz’s office in 2016 had offered to have them meet with a foreign policy staffer, but they refused because they had come to discuss domestic matters.

Sarwat Husain, president of CAIR in San Antonio, said she was similarly disappointed this year that Cruz had not agreed to see them.

But when her group asked to see Cruz at the coffee hour, a staffer told them that he had already left.

“I don’t know how to feel,” said Husain. It was unclear to her whether her group had been purposely kept away from Cruz.

“All we want is for him to hear us out,” she added.

Cruz’s office did not immediately return a phone call on the matter.

Also on Capitol Hill Tuesday, the Senate Judiciary Committee held a hearing on responses to the uptick in hate crimes against religious minorities. No Muslim was invited to testify before the panel.

Spurred by such lack of representation on Capitol Hill, many Muslims are finding their own ways into the civic arena, through Muslim Advocacy Day and other avenues.

“If we want this dynamic to change, we can’t just inveigh against President Trump’s hostility or wait around for sympathetic politicians to press our case,” Alia Salem, former executive director of the Dallas-Fort Worth chapter of CAIR, wrote in The Washington Post this week.

“We must build mechanisms for mobilizing as a voting bloc.”

In February, members of one of America’s oldest Muslim organization met with about 100 lawmakers to advocate religious freedom issues and relaunch the Congressional Ahmadiyya Muslim Caucus.

Others are mobilizing to enter local politics with renewed fervor. Massachusetts policy advocacy startup Jetpac announced a national call to help train Muslims to run for local office. The group says it has received over 100 applications.

On Capitol Hill this week, some politically seasoned Muslim Americans brought along their children, in the hopes of creating a next generation of activists.

Nahela Morales, a Houston activist on Muslim, Latino and women’s issues, came with her son Andrew, 12.

She said she thought Andrew wanted to be a doctor. But then she saw his Tuesday morning Instagram post in which he suggested he wanted to run for president.