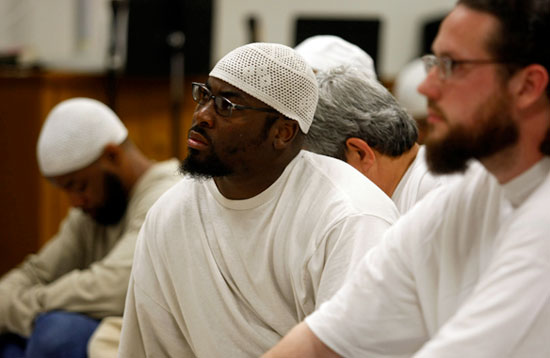 Ramadan is a month of fasting for Muslims around the world. In an American context, many American Muslims have spoken about microaggressions, racism, and ignorance during the month of Ramadan. For many Muslims imprisoned, Ramadan, rather than a month of fasting and spirituality, becomes oppressive.

Last year, TIME Magazine reported the narrative of Hubert Jason – a Black Muslim incarcerated at a Virginia state prison. In April of last year, Jason was fasting from sunrise to sunset, which was over 14 hours at the time. When he finished his fast, he buzzed the prison staff and explained he could eat now. Over the intercom, a voice buzzed out, “I don’t think you’re going to be eating tonight.” He didn’t eat that night.

This is not a rare instance, but common for Muslims who are incarcerated. In Big Stone Gap, VA., the Wallens Ridge prison is now the subject of a lawsuit against the Virginia Department of Corrections over challenges that incarcerated Muslims have faced as a result of practicing their faith in prison. Muslim Advocates was the plaintiff – arguing that there were numerous abuses towards incarcerated Muslims including physical violence, retaliation, unhygienic conditions, and practices that prevented Muslims from receiving adequate food and drink during Ramadan.

Muslim Advocates said, “despite Muslims constituting a significant and growing share of prisoners, many state departments of correction still have policies that are outdated and don’t accommodate Muslim prisoners who have in turn faced multiple hurdles in obtaining basic accommodations for their devotional practices, holidays, burial practices, and religious diet requirements.”

Jason told TIMES, “I don’t expect every officer at Wallens Ridge to understand Ramadan or Islam; however,k all I ask is that they respect my constitutional right to practice the religion of my choice.”

Jason said that prison staff have asked him to “cut his Muhammad beard off,” take off his kufi, and confiscated his prayer rug. Jason was praying on a towel since then.

Legal Examiner found in a study that of almost 7,000 inmates in 12 state prisons, 21% of physical assaults experienced were committed by prison staff while 19% were committed by other inmates. Abuses of power exist exponentially in prisons. With physical violence is also violence of the human and constitutional violations. Physical and sexual abuse, lack of access to medical treatment and care, food deprivation, solitary confinement, unsanity conditions, and forced labor are common. The prison system in the United States is framed by these injustices.

With incarcerated Muslims, abuses increase. Vox reports that Rick, an African American Muslim inmate, treid obtaining a Quran. His request to the officer was denied. When he tried buying one from an officer, the officer told him a price 2 or 3 times more than how much a Bible cost. Rick said, “The discriminiation is so real. All that matters is your background and the color of your skin.”

Muslims in prison make up 9% of the population. Oftentimes, Muslims who are incarcerated are left out of prison reform and abolition conversations. Muslims themselves make up less than 2% of the United States’ population as a whole. Although federal law supposedly guarantees equal access to religious materials, discriminiation in prisons is a longstanding issue.

“It’s like we’re doing something abnormal for them to think we’re being Muslims,” Rick said, “The white-centric world just criminalizes us for who we are. Whether I’m wanting to pray alone or in congregation, it’s a no.”

Vox reports, “But the discrimination goes beyond treatment behind bars. In particular, Black people are twice as likely to be held pretrial as white people. Muslims in pretrial incarceration face an increased risk of victimization, surveillance, and denial of religious freedom in the prison system due to Islamophobia. It also puts those who can’t afford bail at a disadvantage.”

In the month of Ramadan where spirituality and faith are meant to guide you, Muslims who have been incarcerated are villainized for their belief. The overall system of prison in the US disallows justice.