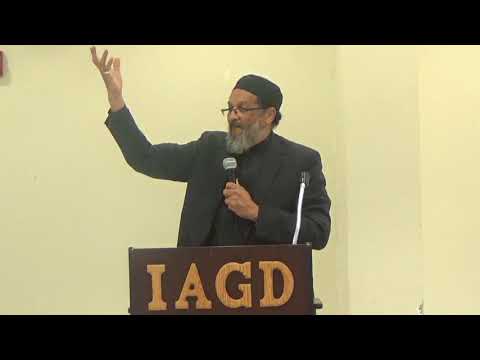 Following is a summary of a lecture given by Imam Khalid Griggs. The event was hosted by ICNA CSJ and IAGD Sunday Islamic School. The complete lecture can be viewed at the bottom of this page.

A major social legislation was passed in 1964 that had epic implications, this came to know as the civil right bill. In 1965, a voting rights bill was passed which allowed African American community after almost 400 years to cast a ballot for the first time. In the same year, a new immigration bill was passed that allowed vast immigration of people with requisite skills or potentials to further this nation in areas of science, education, and technology. This allowed Muslims to migrate into North America, however, what we forget to acknowledge is that Islam was already present in the USA. We already had masajid and Muslim organizations present. What we had now is a critical mass of Muslim community larger than ever before.

In the present time, we have Muslims brother and sisters who have accomplished themselves and consider this country as their own home. Therefore, the time has arrived where we desperately need to carry out the mission of Islam. Allah has given us opportunity of spreading the beautiful message of Islam in a nation with moral corruption and individualism who will take their women to promote their products. Allah has put us in this country with responsibility and for a certain reason. We, Muslims are highest capital income as a group and higher in academics. American Muslim is most diverse community in the world. Let’s use this opportunity to serve as a change agent.

Americans founding fathers have recognized the greatness of Islam and Prophet of Islam by acknowledging Prophet Muhammad as one of the greatest lawgivers of the world. This Honor was given by the U.S. Supreme court. Harvard Law School, one of the most prestigious institutions of its kind in the world, has posted a verse of the Holy Quran at the entrance of its faculty library. This specific verse was recognized and described as one of the greatest expressions of justice in human history. This particular verse is from Surah Al-Nisa (The Women) verse 135 states:

O ye who believe! stand out firmly for justice, as witnesses to Allah, even as against yourselves, or your parents, or your kin, and whether it be (against) rich or poor: for Allah can best protect both. Follow not the lusts (of your hearts), lest ye swerve, and if ye distort (justice) or decline to do justice, verily Allah is well- acquainted with all that ye do.

Imam Khalid closed his talk with the reminder that we are not here to sit quiet for injustice happening around us as Quran and Sunnah of prophet of commandments. We have to stand up in front of Allah SWA one day that you lived in America and what did you do in first part of 21st century?