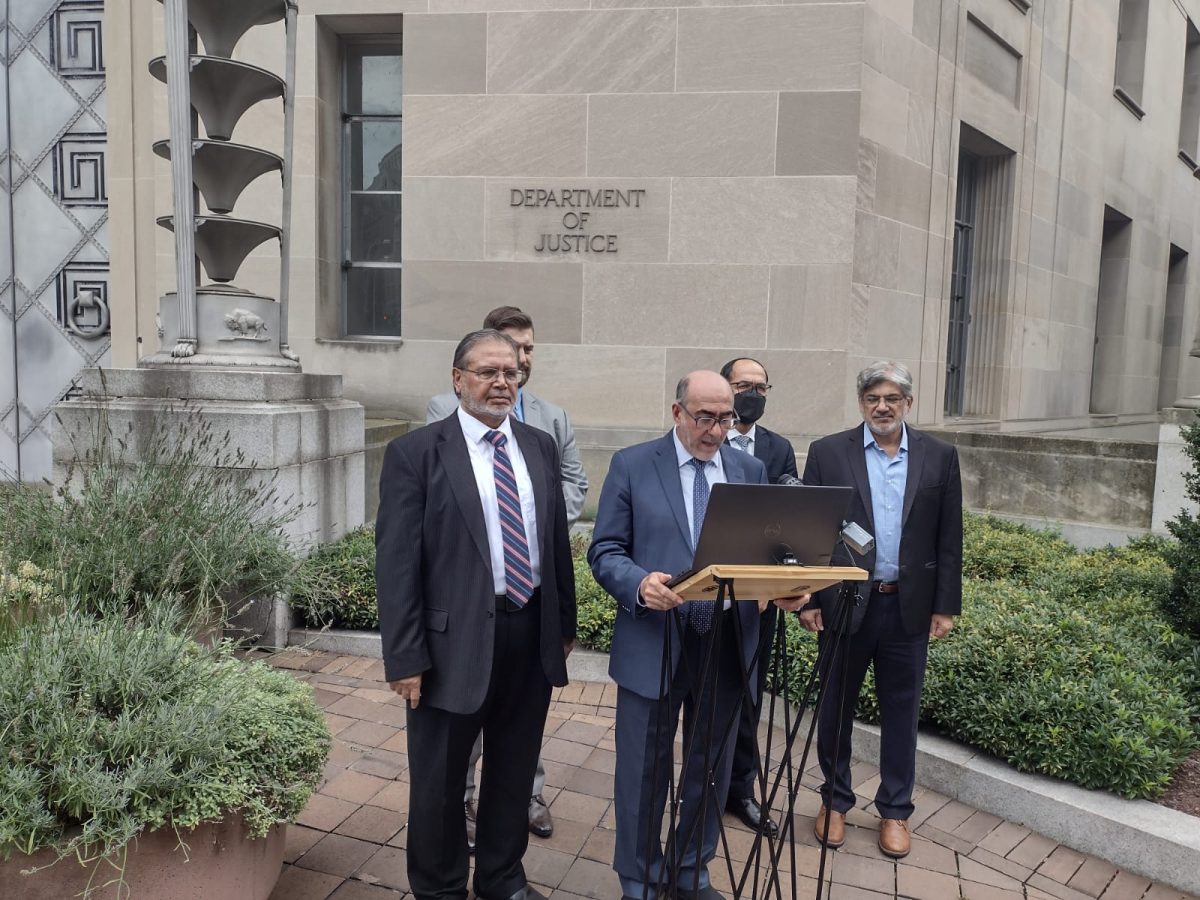 (WASHINGTON D.C., 7/28/22) –The US Council of Muslim Organizations (USCMO), an umbrella group of Muslim civil society organizations and mosques across the country called on The U.S Department of Justice to meet with them to discuss the urgent situation of Asim Ghafoor, a respected American civil rights lawyer, who has been detained in the United Arab Emirates (UAE) since July 14th.

The demands were made in a press conference that was held yesterday, July 28th, in front of the department of justice building in Washington DC. Oussama Jamal (secretary General USCMO), Naeem Baig (ICNA), Nihad Awad (CAIR), and Dr. Zahid Bukhari (ICNA CSJ) addressed the press conference.

The coalition requested Attorney General Merrick Garland to clarify, if, in fact, the U.S. Department of Justice was informed by the UAE of the case against Ghafoor in 2020, and how many other cases does the UAE have against other Americans that were tried in absentia.

“We demand Asim’s immediate and unconditional release from the UAE,” said Oussama Jammal, USCMO Secretary General at the press conference outside the Department of Justice. headquarters in Washington, D.C. “Asim is a civil rights lawyer who has defended the rights of others throughout his entire profession. If he were not imprisoned, he would have been asking ‘How many other Americans have been tried in absentia?’ And today, we stand here and ask that question.”

Ghafoor, who was tried and convicted in absentia and sentenced to three years in prison in UAE, was transiting through Dubai on July 14th to join up with his wife and children in Turkey for a family wedding. While waiting at the gate in Dubai International Airport, Ghafoor was asked to take a COVID test before taking his flight to Istanbul on July 14, 2022. He was then arrested by UAE officials and taken in a van to Abu Dhabi, where he is currently being held by the Abu Dhabi police in a detention facility.

While awaiting his rehearing, Ghafoor has been denied bail and contracted COVID. Since his detention 14 days ago, he has not been able to speak to his lawyers or his family. He has also not been informed of his charges.

Recently, we learned that Ghafoor was in the emergency room for dehydration due to COVID complications. Despite this, he has no access to consular services since Monday, July 18, 2022. His rehearing is set to begin on August 1, 2022.

According to the UAE Public Prosecution Office, their investigation began after a request from the U.S. Department of Justice under the prior Administration in 2020 (Judicial Assistance Request No. 31/2020). Muslim advocacy groups call on Attorney General Merrick Garland to personally engage with Ghafoor’s case and advocate for the protection of his civil and human rights while in detention.