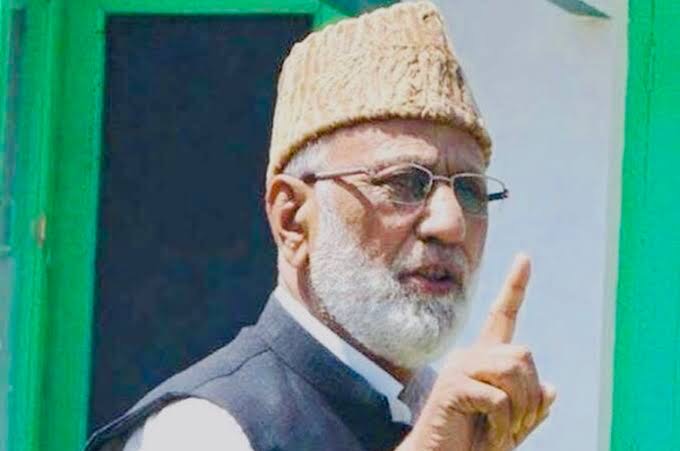 Washington, DC. May 5, 2021:  We at the ICNA Council for Social Justice are deeply saddened by demise of one of the most respected political leaders of Kashmiri freedom struggle – Mohammad Ashraf Sahrayee. He died in the Indian Prison during the blessed month of Ramadan on May 4, 2021. He was 77 years old. We express our heartfelt condolences to his family and the nation of Kashmir for this irreparable loss.

To Allah we belong, and to Him we return. May Allah (s.w.t.) elevate his status as the guided person, comfort him in his grave, make his grave part of Jannatul Firdous and give Sabr to the family! Ameen.

Mr.  Sahrayee was the Chairman of Jammu & Kashmir Tehreek-e-Hurriyet and  one of the most courageous and fearless leaders of Kashmir. He was a thinker and a man with a mission. An alumnus of one of the most prestigious universities of South Asia – Aligarh Muslim University, Aligarh, India, he was a very scholarly and talented personality.

Mohammad Ashraf Sehrayee was arrested under Indian draconian law, Jammu Kashmir Public Safety Act (PSA) on July 12. 2020 and was shifted to Udhampur Jail in Jammu, 200 miles from his residence. India uses PSA as a tool of repression. Under PSA, a person can be detained for up to two years without trial. Amnesty International calls PSA as, “Lawless Law.”

Mr. Sahrayee developed multiple serious medical illnesses, including partial hearing loss from torture. Lately he had developed symptoms of poor eye sight. His family had urged the prison authorities and state government to provide him medical treatment, which was denied. His health condition deteriorated day by day and was shifted from his Jail cell to Jammu hospital on May 4, 2021 where he breathed his last. Jammu Kashmir Bar Association has describes his death as a custodial murder and has expressed grave concern for the life of other Kashmiri prisoners, languishing in different jails of India.

Mr. Sahrayee was in jail not because he was guilty of a crim. His only crime was that  he advocated and propagated the right of self-determination of the people of Jammu & Kashmir. He always pleaded that people’s wishes and sentiments must be respected and Kashmir dispute has to be resolved under the United Nations Security Council resolutions.

He was respected by all, irrespective of their political beliefs. Because as far as his personality and character was concerned, it was free from any kind of blemishes. That is why, Ms. Mehboobha Mufti former Chief Minister of Kashmir tweeted, “Deeply saddened to know about Ashraf Sehrai Sahab’s sudden demise. Like him countless political prisoners & other detainees from Jammu & Kashmir continue to be jailed purely for their ideologies & thought process. In today’s India one pays a price with his life for dissent…The least Government of India (GOI) can do in such dangerous circumstances is to immediately release these detainees on parole so that they return home to their families’’

ICNA CSJ  urges all Imams of American Muslim community to make a special Dua’ –e Maghfirah for late Mohammad Ashraf Sahrayee on Friday, May 7th which is also Jummatul Widah. Also do remember your brothers and sisters of Kashmir in your prayers during this month of fasting as they are facing the existential threat for the last so many years.