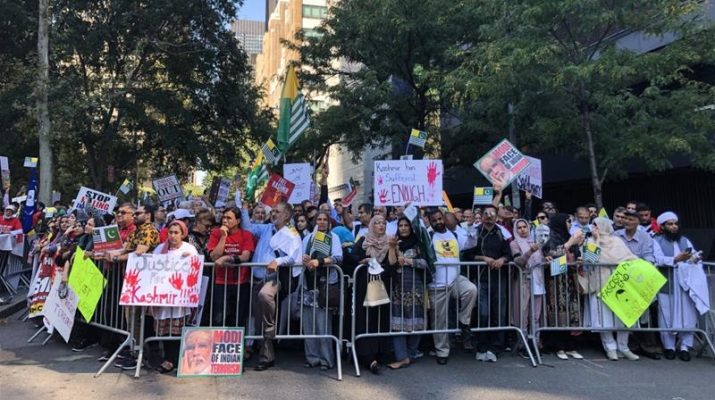 The New York chapter of ICNA Council for Social Justice (ICNA CSJ-NY) and other human rights and social justice organizations joined a coalition of over 20,000 protesters in front of the United Nations building in New York City to oppose the Indian government’s renewed oppression of Kashmiris.

The Indian Prime Minister Narendra Modi and several world leaders addressed the UN General Assembly during the largest protests ever witnessed against India. The protest was also co-sponsored by CAIR-NJ, the IAMC and other interfaith and civil rights organizations. Protesters appealed to elected officials to raise their voice against India’s oppression of Kashmir including an end to the curfew and withdrawal of its army.

ICNA CSJ took the lead in establishing coordination between different organizations. Regular meetings were organized for the past 6 weeks including at ICNA Headquarters. ICNA volunteers came from all over the country to help with the arrangements. Buses were organized from nearby states and hundreds of T-Shirts were distributed. All support for the arrangements was provided by the local American community and no support from overseas organizations or individuals was taken.