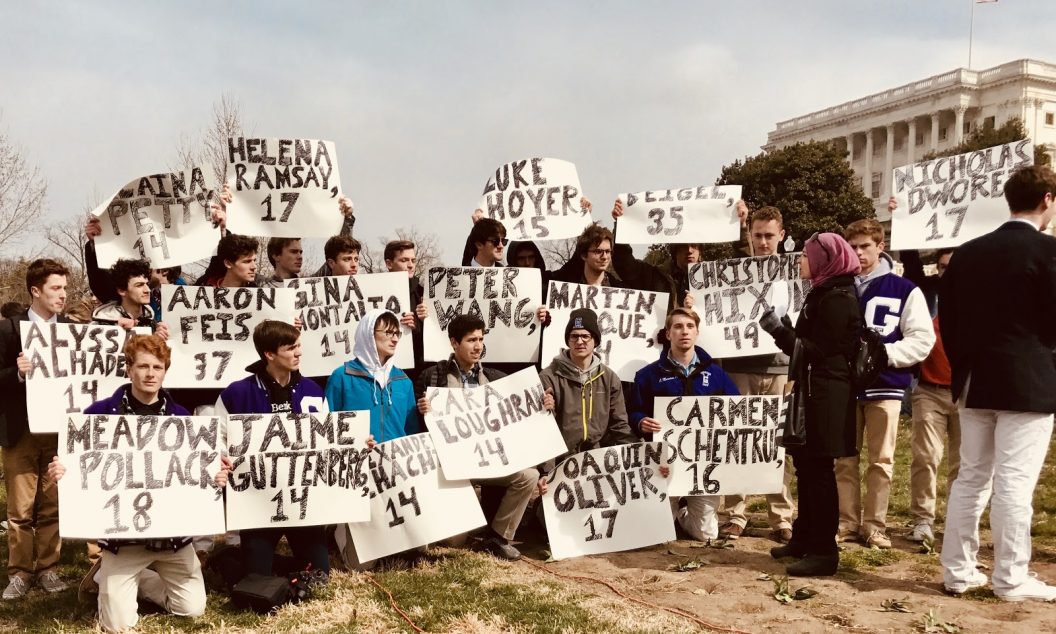 I am utterly disturbed by the senseless gun violence and the increasing school shootings that has shaken our country to its core.  In 2018 alone, our children have been impacted by 17 school shootings and it is only March; this is unequivocally deplorable. Young Leaders Institute (YLI), an organization I founded, joined over 200,000 people on March 24 for the #MarchForOurLives rally on Capitol Hill.  As the Executive Director and active member of my community, I am taking a knee to the 2nd Amendment; at least to its current interpretation in which modernity seems to have skewed its intended purpose.  The 2nd Amendment was never intended to allow American citizens unlimited access to military style semi-automatic weapons and bumpstocks; what I call “mass killing machines.”

As a Marylander, I am proud to live in a state that has passed some of the most comprehensive gun reform laws in our nation.  Sadly though, this did not prevent the recent tragedy at Great Mills High School where Jaelynn Willey lost her life after taking a bullet in the head by a former boyfriend.  It’s been said before and I’ll say it again; “no child should be sent to school under the threat of never returning home.”

Since the Orlando Pulse nightclub shooting in 2016 that took the lives of 49 innocent victims, Young Leaders Institute has been educating young people in civics to understand the nuanced issues around gun safety, gun control and gun violence prevention.  After the club shooting, YLI quickly mobilized a diverse group of high school and college students on Capitol Hill to speak with lawmakers on both sides of the isle about each others role in the fight against gun violence. YLI has thus added civics to its leadership curriculum as an added training module to the other trainings in the area of interpersonal skills development, conflict resolution and ethical leadership.  The ‘congressional advocacy training’ and the ‘power of local politics training’ offered by YLI has equipped our youth with the necessary guidance and tools on how to debate gun violence with federal lawmakers.

In 2015, I had a dream that one day, young people would rise to be the world’s greatest innovators and agents of change, leading a progressive social change movement in our world.  And so I left my job on the Hill and set out to start the YLI in order to offer a platform for young people to unite, elevate their voices and learn how to build power amongst themselves.  At that time, I had no idea how I would accomplish such a great dream but now after the Parkland shooting, I’m finding that my dream is starting to manifest into a reality. “I was amazed by the groundswell of high schoolers who emerged as the new leaders of the young people’s movement in the fight against gun violence,” an issue that has become the focal point of YLI’s civics training.

YLI is working in tandem with several gun violence prevention coalition partners around the country to increase the pressure on Washington to make school safety a priority and to end gun violence through sensible gun legislation.  On March 14, YLI joined thousands of Montgomery County high school students at the #NationalSchoolWalkOut. Despite their silence, there was one group whose voices screamed the loudest. I made a solemn acknowledgement to the ‘group of 17’, who honored the sacred lives of the victims on bended knee while holding up signs with each of their names and ages.

On March 24, I was proud to stand with Congressman Jamie Raskin, at the pre-march rally in Silver Spring who provided 27 buses to transport thousands of supporters to the #March.  In his remarks, he stated “the young people have awoken the conscience of the whole country and they’ve shown us that we have a vast consensus on what to do, and we can get these things done.”

At the #March, sandwiched and surrounded by total strangers- who seemed more like neighbors and cousins than strangers- I was overcome by an aura of hope as we intently listened to the many young speakers, including the granddaughter of Martin Luther King Jr., who all spoke their truths powerfully to the NRA and lawmaking NRA affiliates who line their pockets with blood money.  One after another, these powerful new voters put lawmakers on notice as they forcefully shouted that “our gun laws must change or we will vote you out.”

That day, I witnessed Samantha Fuentes, the Parkland bullet survivor who watched her classmates and closest friends drop, one-by-one, after being gunned down during a shooting rampage by a former Marjory Stoneman Douglas High School student.  With cuts and bruises still visible on her face, Samantha took charge of the stage to honor her late friends and to sing “Happy Birthday” to Nicholas Dworet who died one month shy of his eighteenth birthday. Samantha reminded the world that, had he still been alive, Nicholas would have been eligible to vote in the 2018 midterm election.  Frozen and struck with grief, I clung tight to my daughter and held her very close to me.

All of the young speakers spoke vigorously and their impact was electrifying. The Young Leaders Institute intends to support this movement and carry this message forward from the grassroots all the way up to our members of Congress, in which we, already, have received the endorsement and support from several local legislative and Congressional offices.  Now is the time to act! We must hold accountable our legislators who receive funding from the National Rifle Association (NRA) and we will turnout in scores for the 2018-midterm elections because young people today know that “every vote counts.”

This was the message of my 13-year-old daughter who stood powerfully on the steps of the Lincoln Memorial and spoke passionately to a half a million people at this year’s National Women’s March in January.  On international television, Rayanah- who has been a YLI participant from its inception- urged millennials to power to the polls and have a say in who represents us.

These days, I can’t fight back my thoughts from wondering if my daughter’s school will be next terror zone.  As a mother and youth empowerment leader, I work very hard to create every opportunity possible to give our children a chance at a great future.  I worry about how to keep them safe, healthy, happy and positive. We put helmets on them when riding bikes, goggles on them when they swim, and clean their bumps and bruises when they fall. However, despite our unspeakable bond and commitment to keep them safe, these measures will not make them invincible to gun violence or mass school shootings.

One solution (and there are many measures to be taken) to the gun violence epidemic is to limit the accessibility to purchase weapons, have stricter licensing laws, eliminate and prohibit high-capacity magazines and bumpstocks, close the loophole to ban purchases from private sellers and gun shows, and remove military-style weapons of war from our communities.

These measures will certainly not eradicate all incidences of gun violence entirely but it will drastically reduce the number of gun fatalities each year.  According to the Department of Justice, approximately 60% of all gun shootings are self inflicted by suicide.

Since Columbine, it has been reported that more than 187,000 students at 193 primary or secondary schools have been subjected to gun violence.  As a result, hundreds of children and students have lost their lives in the gun battle. At what point will we, as Americans, recognize and acknowledge that there’s a problem?  How many more children will we have to bury from mass shootings or gun violence before we do something about it?

As a mother, I don’t understand America’s enticing love affair with guns and the 2nd Amendment. And as a believer in the Declaration of Independence, which states: “…all men are created equal & independent, and from that equal creation they derive rights inherent & inalienable, among which are the preservation of life, & liberty, & the pursuit of happiness; …” I will continue to take the knee to the 2nd! The time for change is now, and I hope my fellow Americans will join me in the fight to protect our children. Bullets cannot silence their dreams and we have a moral obligation, as adults, to ensure their safety and their future.