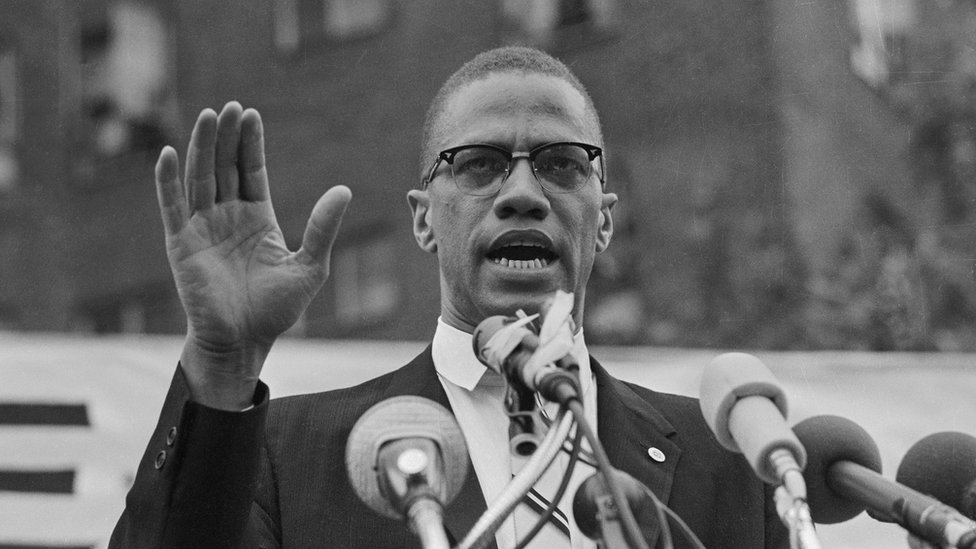 On February 21, 1965, Malcolm X was assassinated while addressing the Organization of Afro-American Unity at the Audubon Ballroom in New York City at 39 years old.

Malcolm X’s legacy is remembered by those in America for his fight for Black nationalism and Black liberation. He is remembered around the world by Muslims for his conversion to Sunni Islam after leaving the Nation of Islam. His words about Islam, peace, and race hold meaningful weight and perspective about being a Black man in America.

Malcom X, born Malcolm Little in Omaha, Nebraska was the son of a Baptist preacher. Facing threats from the white supremacist group, the Ku Klux Klan, his family was forced to flee to Lansing, Michigan. Malcolm’s father was murdered by a white supremacist, and Malcolm was taken from his family by welfare caseworkers.

When he was 21, Malcolm was sent to prison on a burglary conviction. In prison, he experienced Elijah Muhammad’s teachings. Muhammad was the leader of the Nation of Islam, which advocated for Black nationalism and racial separatism. Throughout his time in prison and after his release, Malcolm became involved in preaching self-defense and liberation of Black Americans. Through an incident where Malcolm X was suspended from the Nation of Islam, Malcolm formally left the NOI and made a pilgrimage to Mecca, Hajj. Through this experience, Malcolm converted to Sunni Islam – adopting the name el-Hajj Malik el-Shabazz. After this, Malcolm shifted some of his views – rather than focusing on white people themselves, he was later advocating that racism was the larger issue.

Although some ascertain that Malcolm had a drastic shift after the conversion, it is apparent that Malcolm still held onto his Black nationalist and liberation views. Curtis argues in his book “Islam in Black America,” Malcolm defined Islam in universalistic ways. “Islam was no more relevant to ‘black’ people than it was to ‘white’ people; it was a ‘human’ tradition that applied equally to all human beings” (Curtis, 85).

Malcolm held onto his views on essentialist Black identity. At an address given to the Harvard Law School on December 16, 1964, Malcolm said, “Despite being a Muslim, I can’t overlook the fact that I’m an Afro-American in a country which practices racism against black people…whether I’m Muslim, Christian, Buddhist, Hindu, atheist, or agnostic, I would still be in the front lines.” While some sanitize Malcom X’s views on race and religion after his conversion, it must be understood that his views on Black nationalism did not waver. His conversion allowed for him to utilize a different creed to understand the world, yet he still fought for Black liberation, and believed in pan-Africanism. Although mainstream society deems Malcolm’s words as too radical, too uncomfortable, his rhetoric, although at times at odds with others in the Civil Rights Movement (such as Martin Luther King Jr.), it is often forgotten that the sanitization of figures, leaders, and revolutionaries is created in order to detract from the impact that these figures had. We remember Malcolm X this month, and with this memory, hope to not just create a society that eradicates systemic oppression, but actively addresses it, gives reparations for it, and is equitable in this goal.

After his assassination, Malcolm X’s legacy lives on. Many are radicalized when they read the autobiography of his life. Realizing the ways racism has impacted every aspect of life in America today, Malcolm X was a revolutionary who advocated charismatically and profoundly the struggles of Black America. Through his experience converting to the Nation of Islam to Sunni Islam, Malcolm X symbolizes the longstanding history of not only Islam in America, but liberation and struggle for Black Americans. His legacy is one that impacts all that fight for liberation, his words heard from DC to Jerusalem to Srinagar.

To celebrate the legacy of Malcolm X, read his autobiography (readily available online), and evaluate his words, interpret his legacy into how you can live a life that fights for the rights of Black people in America. Many of the problems that existed when Malcolm X was alive persist to this day – Black history is not just about remembrance, but about action. Fighting to end oppression and make an equitable society is necessary.