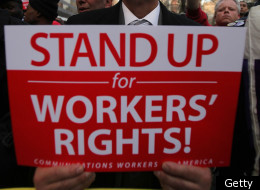 It is very un-Islamic for a person to work another human being and at the end pay him little or no wage. Prophet Muhammad (PBUH) warned in a Hadith Qudsi in which Allah Almighty said: ‘I will be an opponent to three types of people on the Day of Resurrection: one who makes a covenant in My name but proves treacherous;   one who sells a free person and eats his price; andone who employs a worker and takes full work from him but does not pay him for his labor’” (Al-Bukhari).

“You should pay the laborer his wages before his sweat dries” (Sunan Ibn Mâjah(2443)).  This hadith is quite clear and self-explanatory; workers are to be paid on time.   If a person is hired to do a job, he should be paid immediately. However, if there is a contractual agreement that wages are to be paid weekly or monthly, then this is what must be done.  The Prophet of Islam (PBUH) said: “The procrastination of the rich is [a form of] oppression.” He (PBUH) also said: “Whoever oppressed another for a hand span measure of land will have a collar of seven lands placed around his neck on the Day of Judgment.”