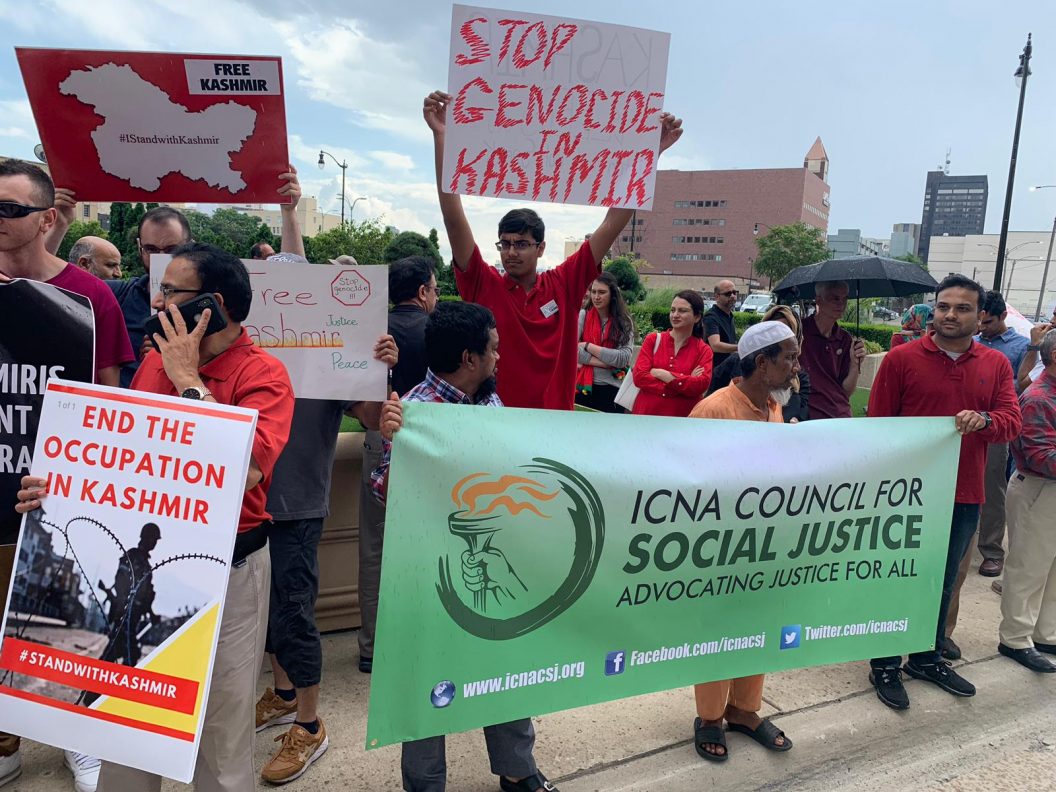 Congresswoman Rashida Tlaib has introduced a new resolution (H.Res.724) condemning the human rights violations taking place in Jammu and Kashmir and supporting Kashmiri self-determination. You can read it here.

Please call your representative in congress and ask him/her to co-sponsor it.

Kashmir is under siege and silence is no longer an option. On Monday, August 5 2019, the Indian government abrogated article 370 of the Indian constitution, which gave the state of Jammu and Kashmir special status within the Indian Constitution. The article was instituted by India’s early leadership to give a certain degree of autonomy to its only Muslim-majority state — one it had incorporated without the consent of its people, who would have preferred independence or accession to Pakistan.

The Indian government also abrogated article 35A, which gives the local Kashmiri state the right to define who is a “permanent resident” of the state. Permanent residents are able to own property or buy land. This was a condition that the pro-accession local leadership insisted upon to protect Kashmir’s Muslim-majority status, and was the last thing Kashmiris were holding onto to preserve some semblance of their nationhood.

A few days before the abrogation announcement, the Indian government put Kashmir under military curfew and ordered all Hindu pilgrims and non-Kashmiris to leave the valley. The following restrictions were also put in place:

This is nothing short of a crisis for the entire humanity. The Indian atrocities continue unabated. Every week dozens of Kashmiris are losing their lives.

For more than five decades, the people of Indian Held Kashmir have been denied their inalienable right to self-determination. The people of Kashmir are helpless. The international community has abandoned them to the Indian repression.

More than 100,000 killed during the last decade, over 15,000 Kashmiri women violated, over 5,000 Kashmiri youths imprisoned in India, interrogation center and torture cells, more than 20,000 kids orphaned, 8,000 to 10,000 involuntarily disappeared, over 200 totally blinded with pellet guns.

By repealing Article 35A & 370 of the constitution, people from the rest of India will now have the right to acquire property in occupied Kashmir and settle there permanently. Kashmiris see the move as an attempt to dilute the demographics of Muslim-majority Kashmir with Hindu settlers

This act of abrogating these two articles is an open contravention of UN resolution #122 adopted on January 24, 1957; # 123 adopted on February 21, 1957 and # 126 adopted on December 2, 1957. These resolutions prohibit any unilateral action to change the disputed nature of the State of Jammu and Kashmir. It is also against Tashkent Declaration of 1966, Simla Agreement of 1972, and Lahore Declaration of 1999 between Pakistan and India.

It is beyond doubt that the longer the uncertainties continue and the longer the United Nations and world powers ignore Jammu & Kashmir, the more dangerous and intractable the crisis becomes in light of the fact that both Indian and Pakistan are nuclear powers. The crisis requires immediate diplomacy that recognizes the explosive situation on the ground in Jammu and Kashmir and takes immediate measures to avert it before it explodes.

Under all international agreements and United Nations Security Council resolutions, Kashmir is not the internal matter of India or Pakistan. It is a disputed territory whose status is yet to be determined by its people.

Please help us print and distribute the following material on Kashmir:

Here are a number of items that all of us can do to take action:

I am a resident of the United States of America and would like to draw your attention towards grave humanitarian crisis and abrogation of special protections of indigenous 5 people in the Indian administered province of Kashmir. The events of recent days in the region, which have received coverage in the international media, have serious implications for the foreign policy goals and economic interests of the United States of America. Ignoring these events endangers stability within the South Asia region, consequently risking a conflagration, with American lives, significant investments, and resources at stake.

In your role as an elected official, I want to make you aware of my concern about these current events in the Indian administered Kashmir, the heaviest militarized zone in the world, where two nuclear powered armies of India and Pakistan are facing each other:

I request you to implore and show concern to the Indian government to seek a negotiated settlement of the dispute, and protect human rights as opposed to the indiscriminate use of force in violation of international law and the Fourth Geneva Convention (GCIV) that protects civilians in the regions of armed conflict. It is imperative that the Indian authorities recognize that the conflict in Kashmir can only be resolved through peaceful means and according to the wishes of Kashmiris.

Thanking you for your consideration.
Your Name

CSJ chapters in District of Columbia, California, Texas, Michigan, Georgia, and Florida held rallies to support the people Kashmir in partnership with other local and national organizations. The attendees demanded that: 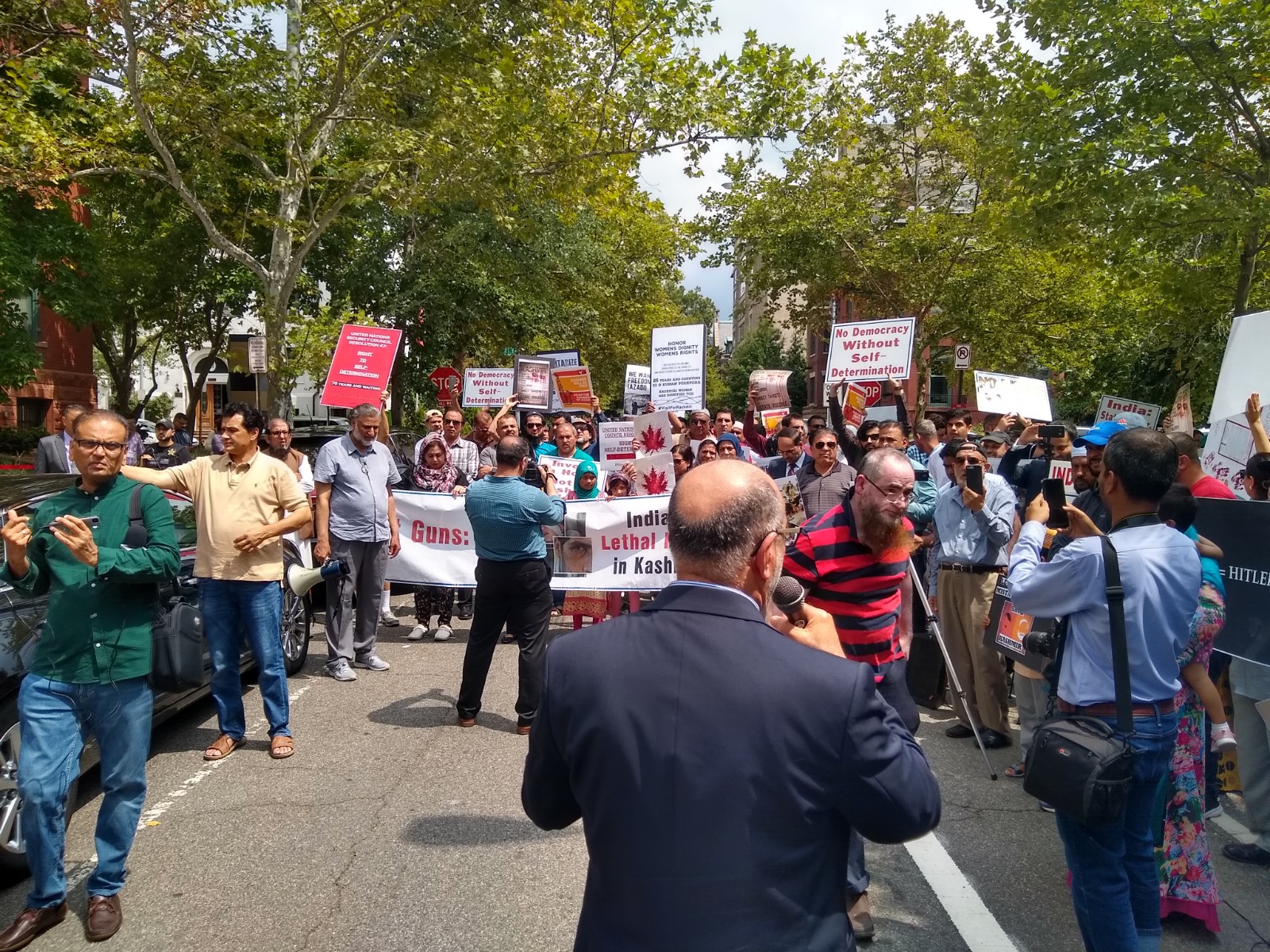 We have a downloadable billboard design for those interested in putting up billboard signs.

We have a downloadable t-shirt design for those interested in printing messages on t-shirts. It’s front and back.

CSJ in the News