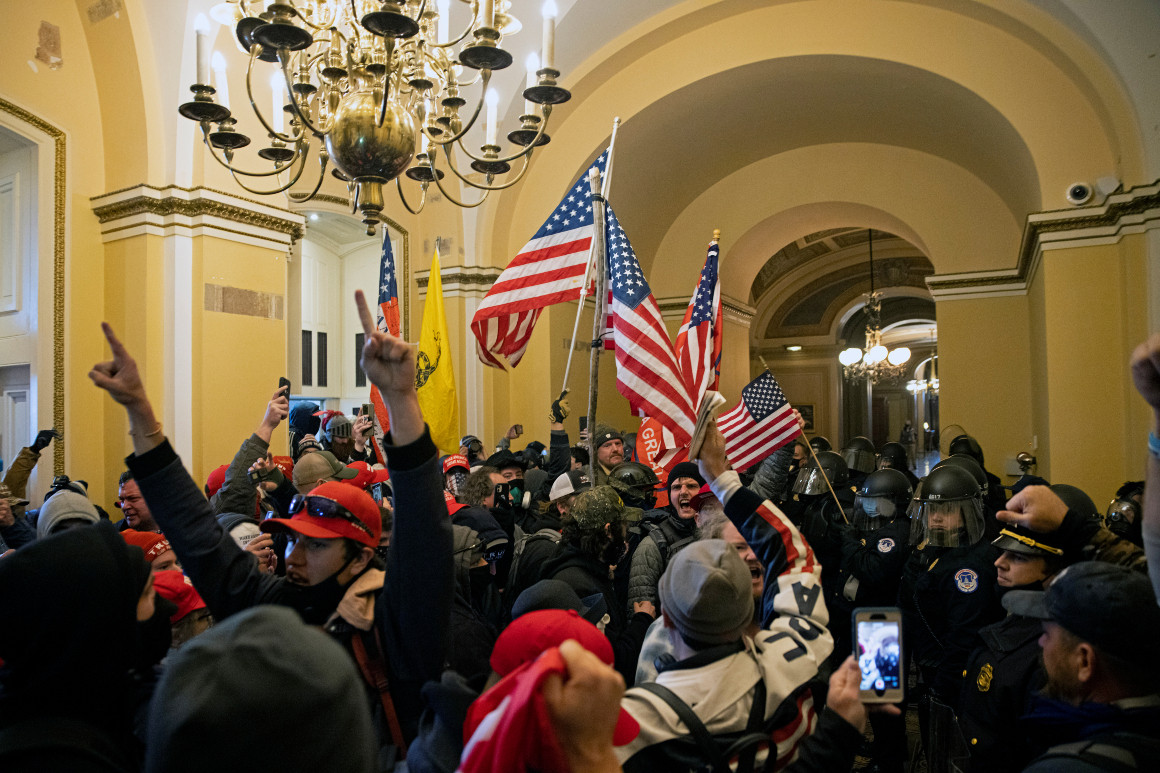 January 6, 2022 will mark a year since the United States’ Capitol was the victim of a pro-Trump mob, what some have deemed as an assult, riot, even attempted coup. Through an examination of different elements that led up to the riot and the aftermath, this article series will serve to pivot and understand the events on Jan 6 as part of the culminating and increasing right wing extremism present not only in the United States, but around the world.

The events on January 6 can be traced to many varying elements in American society – increasing polarity between the left and right, a lost election, and in many cases, far-right wing conspiracies. Right wing conspiracies have been at the core of why many stormed the Capitol in early 2021.

One theory is commonly known as QAnon. It involves a view of Trump as the hero in a battle with Satan worshippers and child traffickers. Through QAnon, rioters believed they were instilling Trump as their biblical hero. In the aftermath of hearings, sentencings, and trials of those involved, QAnon is a common thread amongst the offenders.

Jacob Chansley, self-described as “QAnon Shaman,” was sentenced to 3 years for his role during the riot. He was noticeably seen with a spear and a horned helmet, and pleaded guilty to one felony count of unlawfully obstructing an official proceeding. At the hearing, Chansley told the presiding judge, “I am in no way, shape, or form a violent criminal. I am not an insurrectionist. I am certainly not a domestic terrorist.”

Although it is apparent that there were many actors who stormed the Capitol, wanting to overturn the election results, the role of elected officials cannot be understated. Trump, during a presidential debate, when asked to condemn white supremacists, told the Proud Boys, a known far-right hate group, to “stand back and stand by,” many seeing this as the opposite of a condemnation, an endorsement of white supremacy. Other GOP lawmakers were seen in front of the mob minutes after a Trump told an audience that the election was stolen from him.

After the riot, there were other right wingers who claimed that the riots were actually a conspiracy created by Antifa or BLM.

Popular right wing figures tweeted claims that the riot was Antifa or BLM, which gained traction over the right wing web. Although these claims were debunked by federal authorities, they are reinforced by those on the far-right. Senator Ron Johnson from Wisconsin, reinforced the claim that “fake Trump protesters” created the violence.

Trump, at a White House briefing in August of 2020 said that QAnon followers, “love the country.” Through this constant affirmation, QAnon supporters were emboldened to carry out the attack on Jan. 6.

The utter hypocrisy is glaring then, when looking towards how Black Americans and other people of color are criminalized and demonized in a systematic manner. Read Part 2 in this series to learn more about the hypocrisy of the American media, justice system, and legal system in the response to the Jan. 6 coup.

On January 6, right wing rioters stormed the Capitol building. The mob was able to quickly and swiftly take over the building. As the nation watched in confusion and horror as rioters wore shirt with racist phrasings, swinging their guns, law enforcement at the Capitol, which was overwhelmingly white, seemingly allowed the mob to take over the Capitol.

Writer Roxane Gray said, “Always interesting to see how white protestors can encounter so little resistance and breach the capital with the vice-president there,while black protestors would be lying dead in front of the capitol building right now.”

Half a year before the riot, protests around the US were taking place to fight against police brutality and the killing of Black lives. At these protests, protestors were pepper sprayed, beaten with batons, tear gassed, and shot at with rubber bullets. The aggressiveness of the police was noticeably observed when dealing with protestors who were, mostly, peacefully protesting against the systemic racism present in the US.

The streets of DC in June of 2020 were ridden with military tanks and the National Guard, attempting to disrupt the protests. Although overwhelmingly peaceful, the few riots that occurred gained national attention in an effort to downplay the underlying reason for the protests and anger – systemic racism in the United States that leads to the murder of Black lives.

Although it is not proven or clear that law enforcement “allowed” the mob into the Capitol, it is clear that if the crowd was not majority white, that the response would be different.

It is furthermore clear that the mob, as Trump supporters who are usually pro-police, with the slogan “blue lives matter,” that simply being a member of law enforcement did not protect the police on that day. Harry Dunn, a Black Capitol police officer, testified that slurs were thrown at him as the mob touted guns in his face and called him the n-word.

In an opinion piece published by CNN, Roxanne Jones says, “In America, structural racism has been allowed to fester. In every corner of our society, we’ve legitimized and defended a culture where White bodies are valued over Black bodies.

In a country where innocent Muslims are locked up without charges and trials in Guantanamo Bay, where Black and Hispanic people are sentenced harsher for the same crimes as white people, and where indigenous people are still subject to their lands being ravished by corporations installing pipelines, it is obvious that American society values white lives more than POC lives. It is apparent, through the reaction of law enforcement, that the situation would have been much different if the crowd was not majority white. Through this, it is important to understand further how the response to the 2020 election and Jan. 6 attack has led to more and more problems for people of color through the installation of new voter suppression laws.

The aftermath of the Jan. 6 coup has led to an awareness of the increasing populace that is enamored by the far-right. The far-right has, in 2021, further cemented problematic ideologies and policies that affect people of color. The agenda of the far-right had led to a parasitical penetration in local, state, and national elected offices.

Thirteen participants from the Jan. 6 riot ran for office in 2021. Ten of these insurrectionists won their elections, joining the Virginia House of Delegates, city councils, school boards, and town boards.

Through a strange emphasis on Critical Race Theory, the GOP has passed voter suppression laws designed to marginalize and disenfranchise Black voters, young voters, and other people of color. The Brennan Center reports that 19 states enacted 33 laws making it harder for Americans to vote. More than 425 bills with provisions that restrict voting access have also been introduced in 49 states. Through an emphasis on “banning CRT” in Virginia schools, the GOP candidate for governor, Glenn Youngkin, won his race. In Fairfax County and Loudoun County, VA, CRT has been the center of school board meetings and debates, as the two counties constitute high diversity rates. School board meetings from these counties have gone viral, showing how right wing supporters view school systems.

It is unclear, then, where the US is heading. The Guardian reports that the US is headed towards a civil war as the legal system grows less legitimate, and trust in government falls. A lack of adequate response by the American left leads to growing frustrations of the government. Stephen March, writing in The Guardian says, “What the American left needs now is allegiance, not allyship. It must abandon any imagined fantasies about the sanctity of governmental institutions that long ago gave up any claim to legitimacy. Stack the supreme court, end the filibuster, make Washington DC a state, and let the dogs howl, and now, before it is too late. The moment the right takes control of institutions, they will use them to overthrow democracy in its most basic forms; they are already rushing to dissolve whatever norms stand in the way of their full empowerment.”

The Brookings Institute claims that civil war is not inevitable. Brookings reports that there should not be an assumption that a civil war will happen, but it is important to understand that there may be increases in domestic terrorism and armed violence that further destabilize the US.

As the anniversary of Jan. 6 approaches, we must demand accountability, equality, and equity in the response of the legal, political, and judicial system in the US. Only through this will we achieve a society that is equitable for all.