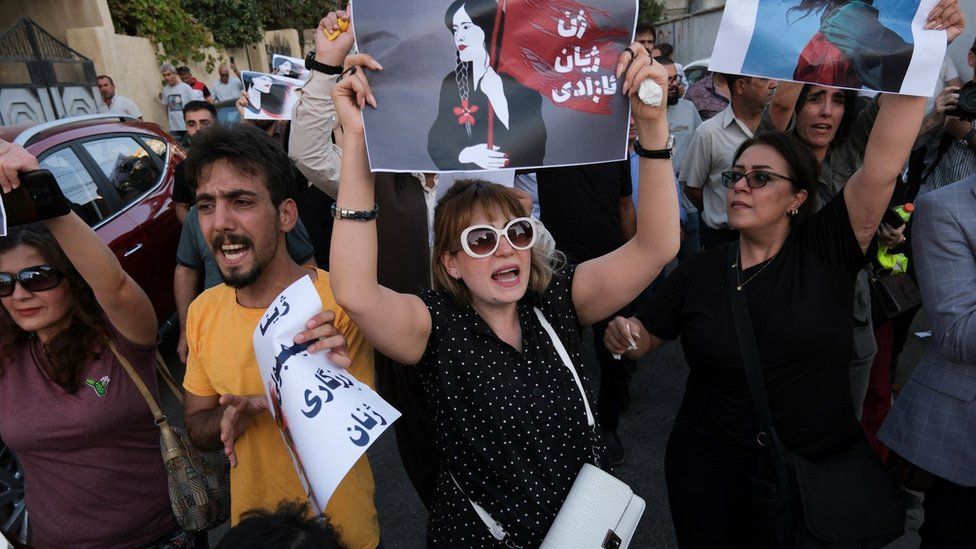 Iranian women have been protesting the murder of Kurdish-Iranian Mahsa Amini, known also in Kurdish as Jina Amini. Amini was murdered by the Iranian police for “violating” the mandatory hijab law. She was beaten to death.

The Persian slogan, zan, zindagi, azadi, adopted from the Kurdish, jin, jiyan, azadi, stands for women, life, freedom. These protests come at a time when the Iranian government is cracking down on minorities, women, and the oppressed in society.

The protests have been heavily covered by Western media. There is nuance to be understood when Western media capitalize on certain issues in the world but not others. For example, Western media platforming Iranian voices in regards to womens’ rights is necessary; however, the same Western media does not lift a voice for women belonging to minority groups in their own communities. This is problematic, because the West emphasizes its enmity with the Iranian government. The Iranian government and Iranian society are on every level sanctioned by the US and other Western countries; however, when it comes to the idea of hijab, Western media emphasizes patriarchal, misogynistic, and violent elements of certain Muslim-majority societies while ignoring the transgressions in their own countries.

Iranian women deserve to be platformed. The way that certain media is covering the protests in Iran, however, is self-serving. Videos of French women cutting a couple of inches of their hair in solidarity for Iranian women circulated on Twitter, causing anger at the lack of French solidarity with Muslim women in France affected by with hijab bans. Recently in Switzerland, a law was enacted to charge women a $1000 fee for wearing niqab. In India, videos of women cutting their hair became a popular trend to showcase solidarity; desite  India’s genocide of Muslims through its Hindu Nationalist governmentt. It is hypocritical and illuminating which voices Western media chooses to amplify at a time when Iranian women are fighting for their agency.

Another element to the coverage on the Iranian protests is the erasure of Jina Amini’s Kurdish identity. Her Persian name, Mahsa, is the face of viral hashtags and of the movement. However, Jina being Kurdish is integral to her murder and the history and present of state violence in Iran.

Novara Media says, “Iranian state discrimination against Kurds includes a widespread ban of Kurdish names which forces many families to register their children officially with non-Kurdish names, while maintaining their actual names at home. This in turn fragments the experience of many Kurds and creates an ‘official-legal’ and an ‘unofficial-illegal’ identity. The authentic ethnic-cultural identity loses its validity and a name that says nothing about your roots identifies you.”

It is important to support Iranian women by uplifting their voices rather than Western ones that are using the former as an excuse for their Islamophobia. You can support the Iranian people by urging your elected officials to lift sanctions on Iran – they do more harm than good to the average Iranian.