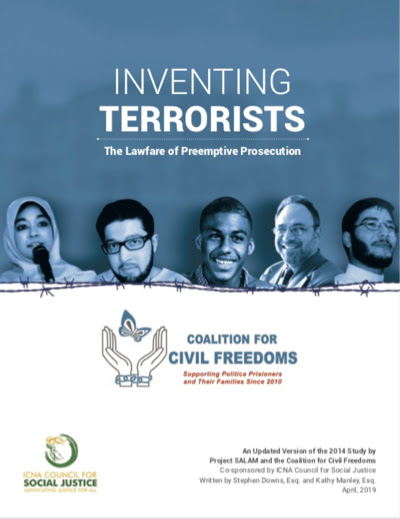 This study, sponsored by three national organizations, Project SALAM (Support And Legal Advocacy for Muslims), the Coalition for Civil Freedoms (CCF) and ICNA Council for Social Justice (CSJ), focuses on post-9/11 claims by the U.S. government that it keeps the county safe from terrorism by arresting hundreds of so-called “terrorists” who were about to strike the U.S. until the FBI foiled their plots. In fact, this study shows that there have been remarkably few actual terrorism threats to this country in the last decade. We found that over 90 percent of the cases posed no such threat. The vast majority of arrests in the war on terror have consisted of:

The study shows that the war on terror has been largely a charade designed to make the American public believe that a terrorist army is loose in the U.S., when the truth is that most of the people convicted of terrorism-related crimes posed no danger to the U.S. and were entrapped by a preventive strategy known as preemptive prosecution.

The study defines preemptive prosecution, gives background on the origin of the concept, discusses the tactical patterns that characterize its use by the government, and provides a methodology for determining the categorization of a case. The study then shows, for cases on the DOJ lists, the percentages for each categorization of a case, as well as percentages for the tactical patterns used in each categorization. The study concludes that the government has used preemptive prosecution to exaggerate the threat of Muslim extremism to the security of the country, and presents some hypotheses as to why the government has done this, without taking a position on which possibilities may be correct. The study also makes recommendations to change the present unfair terrorism laws.

In addition to the report, we also advise watching the video above where we interview two attorneys to speak about preemptive prosecution and why it is so problematic.