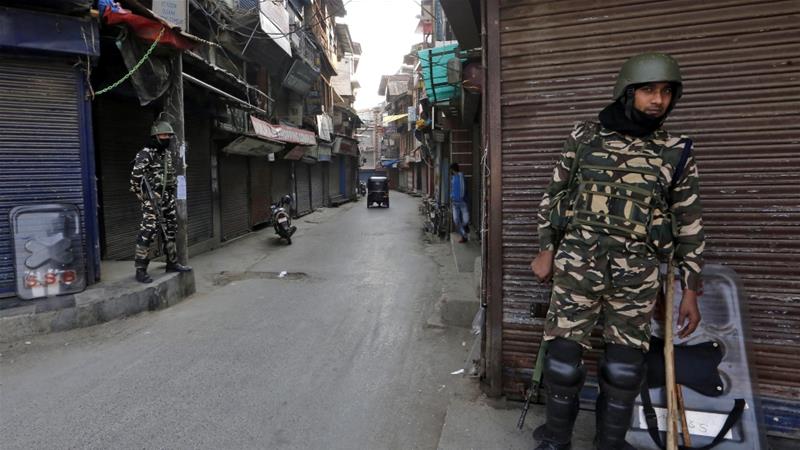 India is a land and a society of myths. More so now than ever before, under the Hindutva inspired Bharatiya Janata Party government led by the claim of the myth manufacturer Modi, “India is a democracy; it is in our DNA.”

A much talked about myth has been that India is a secular state, and in the light of the post Aug. 5, 2019 developments in Kashmir and the Indian mainland, much sighing is being aired that Indian secularism is endangered.

However, the question arises, when was India secular? Was India “secular,” when it invaded Jammu & Kashmir (J&K) on Oct. 26, 1947 on the pretext that a non-Muslim should rule a Muslim-majority state, or was it “secular” when Hyderabad Deccan was invaded and annexed on Sept. 23, 1948 on the pretext that a Muslim could not rule over a Hindu majority.

Based on a myth about the birthplace of the mythical “Lord Rama,” the 600-year old Babri Mosque was attacked and demolished on Dec. 6, 1992. India’s Supreme Court validated the goon squad’s action on Nov. 9, 2019. Today, the mosque’s attackers rule India.

Even the national anthem Vande Matram is not secular, where Muslims object to its idolatrous aspects. For instance, the fourth stanza, addresses motherland India as, “Thou art Durga, Lady and Queen, with her hands that strike and her swords of sheen, Thou art Lakshmi lotus-throned…”

When a Muslim sings these words, he is forced to equate his country with the Hindu goddesses Durga and Lakshmi, thereby deifying the land of India. This goes against the concept of tawheed (the Absolute Oneness of God) according to which a Muslim cannot supplicate to anyone except God.

The other long-standing myth, which India validated through a presidential fiat last year, is that J&K are its “integral” part – a territory it has occupied since Sept. 1947 with a million-man force. In doing so, it served up another myth: the constitutional relationship between J&K and India.

Subodh Varma (“Some Myths About Article 370, 35A and Kashmir”, Sabrang India Aug. 8, 2019) explains that in the process of effectively scrapping Article 370 of the Constitution through a presidential order supported by a Lok Sabha (lower house) resolution, the Bharatiya Janata Party (BJP) and its supporters regurgitated a slew of myths, half-truths and sleights of hand that have been part of its parent, the Rashtriya Swayamsevak Sangh (RSS) propaganda for decades. Ironically, many parties and opinion leaders who do not subscribe to the RSS ideology also repeated them, which show how far these myths have traveled. Meanwhile, social media went ballistic with RSS/BJP supporters posting bizarre claims while others started offering land for sale in Kashmir.

He had sought to prove that Articles 370 and 35A were somehow unrelated to J&K’s “joining” [albeit perforce] the Indian Union implying that they are unnecessary and also that they were the result of some [past] Congress governments’ stupidity.

This is a lie.

On Oct. 26, 1947, India invaded J&K, obliging its ruler, Raja Hari Singh, to sign the Instrument of Accession (IOA) — the Dogra ruler’s ancestor having purchased the territory and its citizen from the British. However, this document states that the Indian parliament could only legislate on the state’s defense, external affairs, communications and some ancillary subjects. The agreement’s Clause 5 reads: “The terms of this my Instrument of Accession cannot be varied by any amendment of the Act or of Indian Independence Act unless such amendment is accepted by me by an Instrument supplementary to this Instrument.” Clause 7 says: “Nothing in this Instrument shall be deemed to commit me in any way to acceptance of any future constitution of India or to fetter my discretion to enter into arrangements with the Government of India under any such future constitution.”

Simply stated, it says that many things left pending in the IOA were to be settled later through negotiations. After its invasion, India, which faced the Kashmiri resistance till 1949, finally seeking a UN-negotiated armistice, has yet to lay out the laws and governance mechanism. Accordingly, the UN Security Council adopted successive resolutions call for a plebiscite where the Kashmiris would vote freely to decide their future.

The UN continues to recognize Kashmir as a disputed territory.

The 1947 partition agreed upon by Muslim and Hindu leaders with Britain, the departing colonial ruler, reads that Muslim majority states would merge with Pakistan. Kashmir is a clear case.

To preserve the IOA’s spirit and to reassure the Raja, Article 370 was moved in India’s Constituent Assembly in May 1949, which was voted to be part of the Indian Constitution in October 1949. Consequently, Presidential Orders were issued in 1950, 1952 and 1954 to settle various issues. Jawaharlal Nehru – India’s first prime minister — and his interior minister Vallabhbhai Patel (d. 1950) were part of these negotiations, which negates the RSS myth that Patel opposed Article 370.

The RSS propped up the full integration bogey to stir up agitation against the land reforms initiated by the Raja-appointed Sheikh Abdullah government. The RSS gave it a communal hue as the landowners were mostly Dogras and Pandits and most peasants were Muslims.

The RSS/BJP propaganda about Article 35A hides the fact that Raja Hari Singh had proclaimed the Hereditary State Subject Order in 1927, which allowed only the state’s residents to own land and to government jobs. The state’s assembly voted to include this order in the J&K Constitution. In keeping with the IOA terms regarding the preservation of rights of state’s residents, Article 35A was added to the Constitution through the Presidential Order of 1954.

The RSS states that J&K, with its “oppressive Muslim-majority character, has been a headache for our country ever since Independence.”

RSS alleges that forces “inimical to Bharat never wanted Kashmir to integrate itself with Bharat … and in October 1947, these elements conspired with the enemy to defeat every move to save the situation from our [Indian] side.” While, India continues to loudly claim that it was Pakistani tribal fighters and not Kashmiri freedom-fighters who confronted the Indian invading army, RSS claims that it was its fighters who fought alongside Indian troops, adding that if a ceasefire had not been agreed upon, its fighters would have helped completely conquer J&K.

RSS blames the large Muslim presence for J&K being conferred a special status under Article 370, even after its total “accession.”

On Dec. 11, 1991, BJP president Dr. Murli Manohar and Narendra Modi, and also, the now interior minister Amit Shah — led the 15,000 mile “Ekta Yatra” (Unity March) from Kanyakumari, a Tamil Nadu coastal town, the southernmost town in mainland India, which culminated in Srinagar’s Lal Chowk on Jan. 26, 1992 to hoist the Indian flag, signaling that they had “arrived to settle the account.”

RSS claims: “The endless appeasement of the Muslim population, especially in Kashmir, practiced by the successive governments at Delhi, has been the bane of our government’s Kashmir policy. Just as too much mollycoddling and lack of discipline spoil the child, so has been Kashmir, a problem created out of our own folly.” RSS alleges that Pakistan arms militants for armed revolt from within India.

Amit Shah has harped the long-repeated party line that Article 370 is the root cause of spread of terrorism. As a corollary, it is also said that the article was the source of sentimental belief in a separate Kashmir, providing ground to cross-border terrorists to exploit.

However, it is the erosion of Article 370 that has led to increasing disenchantment of Kashmiris and their search for a way out. For instance, Article 370 provided for extending provisions of law to J&K through Presidential Orders, issued after concurrence of the state assembly. However, the 1954 Order has extended almost the entire Constitution to J&K. Out of the 97 entries in the Union List, 94 have been made applicable to the state and out of the 47 entries in the Concurrent List, 26 have been extended to the state. This has largely reduced the state’s powers. Overall, Article 370’s provisions were used at least 45 times to extend Constitution’s provisions to J&K.

Not only have the J&K rights been increasingly restricted, but also the spirit of the section has been violated by simply getting the state government to rubber stamp such extensions.

Also, the J&K Constitution was amended several times using Article 370. For instance, Article 356 was extended removing a similar provision in the J&K Constitution (Article 92), which called for President’s concurrence for imposing President’s rule. Article 370 was used for the extension of President’s rule. Even Article 249 (parliament’s power to make laws on State List entries) was extended to J&K through a recommendation of the governor, bypassing the state legislature.

In the past, Congress governments and later BJP used these measures to manipulate the politics of the state to install ministries or impose President’s Rule.

Another myth, really a blatant lie, proffered by BJP is that development was not possible because Article 370 didn’t allow it. Post-August 5, Indian politicians and opinion leaders continue to harp that with the removal of special status, including J&K will now become part of global India. Seriously, how Article 370 stopped any government from providing or encouraging more investment and industry in the state when most provisions of the Constitution, including Union list entries were extended to the state. The Union governments could have undertaken any economic measures or programs they wanted in J&K. In fact, there was nothing except unkempt promises of colossal special packages. No Indian government undertook any economic or political measures that would provide sustainable and long-term benefits to J&K.

Simply, the removal of Article 35A will now free real estate sharks to gobble up properties and use it for setting up private businesses including private schools. It is difficult to believe that private investment will flow into J&K, when an occupied people there are discontented and uncertain.

Indian propagandists in and out of government harp on the myth Articles 370 and 35A, and the arrangements they enshrine, were unique to J&K. In fact, Nagaland, Assam, Manipur, Andhra Pradesh, Sikkim, Mizoram, Arunachal Pradesh, and Goa enjoy similar provisions. In other states too, there are laws preventing non-domiciliary persons from owning land.

The Narendra Modi-led central government had, after the revocation of Article 370 of the Indian Constitution, recently announced that people will now be able to buy land in Kashmir. As a result, the 1971 circular, which restricted land acquisition and requisition without a ‘No Objection Certificate (NOC)” from the Home Department, has now been replaced by the Right to Fair Compensation and Transparency in Land Acquisition, Rehabilitation and Resettlement Act, 2013. And, the displacement of Kashmiris with the replacement of Indians has begun the process of ethnic cleansing, leading to a genocide of the Kashmiri people.

Shakeel Syed is the Regional Director for American Muslims for Palestine & serves the boards of Clergy & Laity for Economic Justice (CLUE) and Death Penalty Focus. Syed also served as the founding Executive Director of the Islamic Shura Council of southern California & as the Vice President of ACLU – Southern California.