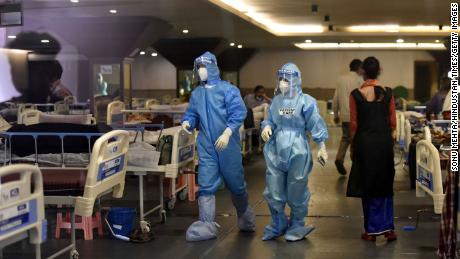 We ask that Allah (swt) grant the people of India ease in this tumultuous time, that the afflicted receive quick and effective health care, and that the overall disparities and inequality of Covid-19 are eased. May the sick and the families of the sick be recovered and eased during this blessed month of Ramadan.

In India, a second wave of the coronavirus is killing thousands every day, according to CNN. The wave began in March, with more than a million cases in three days.

Currently, India’s hospitals are running out of oxygen and ICU beds, with over 300,000 new cases of the virus daily. The total cases as of Sunday, April 25 were over 17 million and deaths are totaling over 2,000 every day. As countries send aid to India in the form of oxygen, ambulances, and other aid, the cracks in the Indian health care system are unlikely to carry the weight of the catastrophe.

How did the situation become like this? In early 2021, Prime Minister Narendra Modi and his administration adopted an idea that the coronavirus was over, and thus, holding large campaign rallies and permitting gatherings for religious festivals. Many of India’s citizens blame the administration for its poor rhetoric and handling of the virus. In New Delhi, patients are suffering as oxygen tanks run out; relatives are turning to social media and the black market for any direction towards ICU beds and drugs to fight the virus.

As the situation becomes more and more desperate, India’s situation will be felt worldwide – the AstraZeneca vaccine has millions of doses that are manufactured in India on halt. The vaccination gap is another glaring issue within the context of not only India, but worldwide. According to the UN World Health organization, 87% of the world’s Covid-19 vaccine supply has been administered to countries in the Global North. One in four citizens of rich nations have had a vaccine, while one in 500 citizens in low-income countries have had a vaccine. There are 130 countries that have yet to administer a single dose of the vaccine – totaling to 2.5 billion people. With the vaccine gap, Big Pharma is making large amounts of profit on the vaccines – Pfizer, Johnson and Johnson, and AstraZeneca have paid out $26 billion in dividends and stock buybacks to their shareholders. These pay outs are enough to vaccinate 1.3 billion people.

In order to close the vaccine gap, you can call Congress and tell your senators and representatives to lift export restrictions of vaccines and vaccine ingredients, waive vaccine intellectual property rules to expedite the process for vaccines for all, and release emergency aid to India in support of oxygen, anti-virals, and other medical supplies.

In addition to the global vaccine gap, there is further inequality in India embedded in the health system. Along with criticism of Modi and his administration, the ruling party (Bharatiya Janata Party, BJP), has published ads telling worshippers that it is clean and safe to attend religious festivities, pilgrimages, etc in March of 2021. In the past year, there has been discrimination against non-Hindu minorities, especially Muslims, who are scapegoated for spreading Covid-19. This rhetoric demonizes non-Hindus and further emphasizes the religious nationalism in place in India today as a result of the BJP and Modi. Furthermore, many low-caste activists and individuals are speaking up about their mistreatment in every day life in India, let alone during the pandemic.

Dalitcamera on Instagram says, “The poor, Dalits, minorities, and OBC suffer every day like this. They don’t get hospital beds. They are treated like animals. No one wants to touch them. The middle class and high income class treat health like a commodity and now they are the ones who are not getting beds and oxygen.”

As more and more countries pledge to send India vaccines, oxygens, and other medical supplies, we can only hope and pray that this will be effective in the face of a drowning health care system and mass irresponsibility from the administration.

To donate to help India, please go to this link, a resource compiled by South Asian Today.