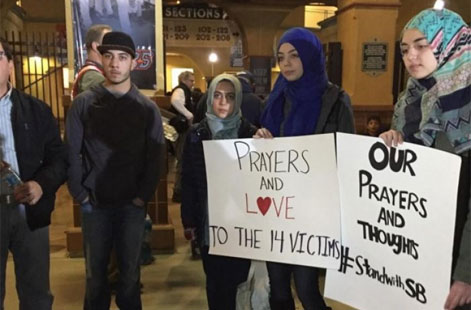 The Islamic Circle of North America is repulsed at attempts by some in the media to link the suspects of the recent attacks in San Bernardino to the organization’s women’s division. Certain media sources reported that a certificate of appreciation from ICNA Sister’s Wing addressed to the mother of one of the suspects was found in the home during a search on Friday.

ICNA Sisters Wing is the women’s division of ICNA, which strives to provide Islamic classes and seminars to women of all races and backgrounds. All attendees of these educational programs receive certificates of appreciation at the conclusion of these classes.

ICNA, through its various divisions, is involved in a broad range of charitable, educational and civic initiatives. ICNA Relief is an award winning charity given highest rating by Charity Navigator. It has provided relief in hundreds of disasters and runs numerous women’s shelters, free health clinics, food pantries and counselling centers in over 30 cities across the country. The D.C. based ICNA Council for Social Justice is part of over 30 initiatives working in collaboration with other faith based organizations, including Jewish and Christian organizations, on issues like living wage, race relations, immigration, environment, torture, employment equality, etc.

ICNA has consistently and strongly condemned all violent acts in our nation and across the world including this one. ICNA has been at the forefront of challenging these acts at the religious and ideological front. Neither ICNA nor any of its divisions are the target of any investigation by any law enforcement agency. It is sickening that certain groups in our country would find opportunity during these difficult times to sow suspicion based on preconceived bigoted ideas.

Once again ICNA expresses confidence in the efforts of the law enforcement agencies to bring a just conclusion to the investigation with proper process. ICNA also calls on the community to extend full cooperation to these efforts.