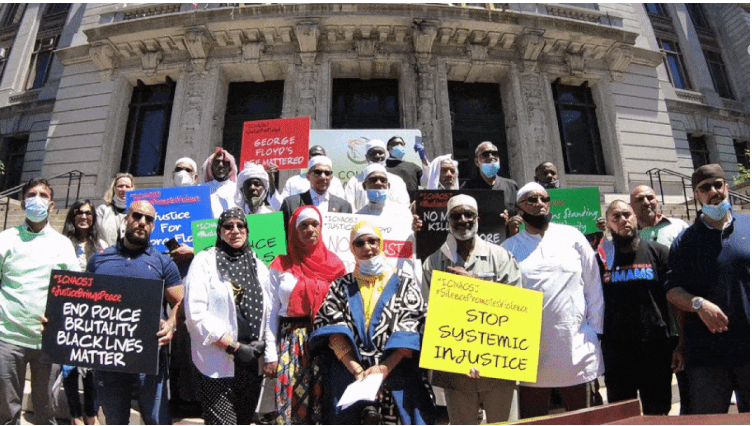 Muslim groups gathered at Newark City Hall on Saturday to denounce police brutality in the wake of George Floyd’s death and reflected on racism and religion.

The New Jersey branch of the Islamic Circle of North America (ICNA) Council for Social Justice, one of the organizers of the rally, called for police reforms such as annual racism sensitivity training for all officers.

“All of us – in our Muslim community leaders and community at large – all of us are gathered here to express our full solidarity with our brothers and sisters in the African American community and we are condemning the death of George Floyd in Minessota,” said ICNA CSJ-NJ Director Atif Nazir. “Police brutality is a long-standing issue in this country and Mr. Floyd was a victim of this atrocity.”

Floyd, a 46-year-old black man, died May 25 after a white Minneapolis police officer, Derek Chauvin, knelt on his neck for almost nine minutes and three other cops looked on. ICNA Council for Social Justice created an online petition demanding murder charges for all four officers involved in Floyd’s arrest, although only Chauvin faces a second-degree murder and manslaughter charge among the four cops arrested.

Imam Wahy-ud Deen Shareef, who is the president of the Council of Imams in New Jersey, reflected on how religion and race have intersected. He said racism was introduced in religion since Jesus is most often depicted as white.

“The very fact that our minds exist in this environment is enough to make that image and those messages go into our subconscious and cripple the Black people’s ability to lift themselves out of their sense of inferiority,” Shareef said. “It also keeps Caucasian people’s minds in a false world by making them unable to see their real worth and value as human beings apart from their physical skin color.

“The problem: we are not to see God in racial images,” he added.

Newark Board of Education Vice President Dawn Haynes said Floyd’s death sparked a conversation in her community about how they can become stronger and work together. There is, she said, a conversation to be had within her umma, an Arabic word meaning community, about race as well.

“The racism that we’re suffering in America, we feel that same racism when we’re at some of these summits of our Islamic environment,” Haynes said to cheers. “And that’s sad.”

The group was joined by local council people, mayors, and leaders from other religions like the Lutheran Church. Newark Mayor Ras Baraka, who has been championing a civilian complaint review board, called on those at the rally to join the police force as another way to have more community control of the police department.

Montgomery Mayor Sadaf Jaffer, who organizers said was the first woman Muslim mayor in New Jersey, credited the activism of Black Americans for the freedoms she experiences today. She identified as an Asian American to the crowd.

“Though equality is essential to my understanding of Islam, racial equality has not been the practice in far too many Muslim contexts, historically and today,” Jaffer said. “We must take a look at our own communities and ensure that we are centering Black voices.”

The Council on American-Islamic Relations of New Jersey and the Muslim American Society – New Jersey also helped organize the rally.