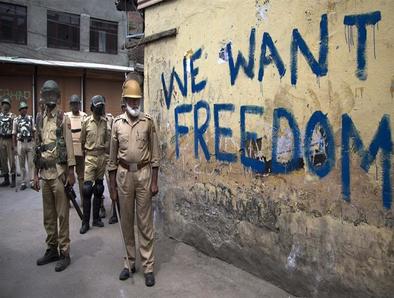 The World Kashmir Awareness Forum (WKAF) is distressed by and condemns the Indian government’s recent attempts at changing the demographic status of Jammu & Kashmir by introducing the tendentious and politically motivated rules in the occupied territory, at a time when the whole world is grappling with a pandemic of epic proportions.

Under a bizarre and illegal ‘Jammu & Kashmir Reorganization Order, 2020’, the citizens of India will now be able to settle in and compete for jobs in the disputed territory of Jammu & Kashmir. A Kashmir based human rights activist, Khurram Parvez, has highlighted that “By virtue of this order, outsiders are… going to be the claimants of jobs in Jammu and Kashmir, which already has a huge unemployment problem. This is an act against the interests of unemployed youth.”

In a wanton display of disregard for the aspiration of the Kashmiris, the Indian government is about to introduce an undemocratic delimitation measure which aims at constitutional entrenchment of a Hindu majoritarian agenda to dispossess the people of Kashmir.

The aim of this revisionist and motivated rewriting of history is to alter the demographic character of the Muslim-majority territory at a time when the world’s attention is focused on the worst public health and economic crises of our times. These cynical attempts to seize the opportunity and take advantage of the prevailing global circumstances are reflective of the toxic and fascist mindset of the Hindutva regime in New Delhi.

The fascist government has deliberately chosen the timing: On the one hand, Kashmir is under the internet blockade, and India is under a 3-week lockdown. On the other hand, world attention is sharply focused on battling the global scourge of the coronavirus.

In one voice, the Kashmiris across the globe have rejected these reprehensible attempts to change the demographic character of our nation, and, resolved to counter India’s bigoted settler colonialism through peaceful resistance.

The United Nations must remind India of the disputed nature of the occupied territory, and the need to fulfill the UN Security Council Resolutions on the issue. The BJP rulers in New Delhi must be reminded that their actions are in direct conflict with the Geneva Conventions and international law. The world community and the people of conscience must impress upon India that in a democracy, legitimacy flows only from the freely given consent of the governed.

In his August 8, 2019 response to India’s actions regarding abrogation of Article 370 of the Indian constitution, the UN Secretary-General had noted that the “the position of the United Nations on this region (Kashmir) is governed by the Charter of the United Nations and applicable Security Council resolutions.” Therefore, it must to be emphasized that the ‘Reorganization Order’ contravenes UN resolutions #122 and #126 adopted on January 24, 1957, and December 2, 1957, respectively. These resolutions prohibit any unilateral action targeted at changing the disputed nature of the State of Jammu and Kashmir.

On February 16, 2020, the UN Secretary-General declared, “We have taken a position that UN resolutions (on Kashmir) should be implemented, there should be ceasefire (on LoC), and human rights should be respected.”

We, the people of Kashmir across the globe, appeal to the Secretary-General of the United Nations to once again impress upon India the disputed nature of the occupied territory, India’s longstanding commitments on this issue, and, the urgent need to fulfill umpteen UN Security Council Resolutions regarding Kashmir.