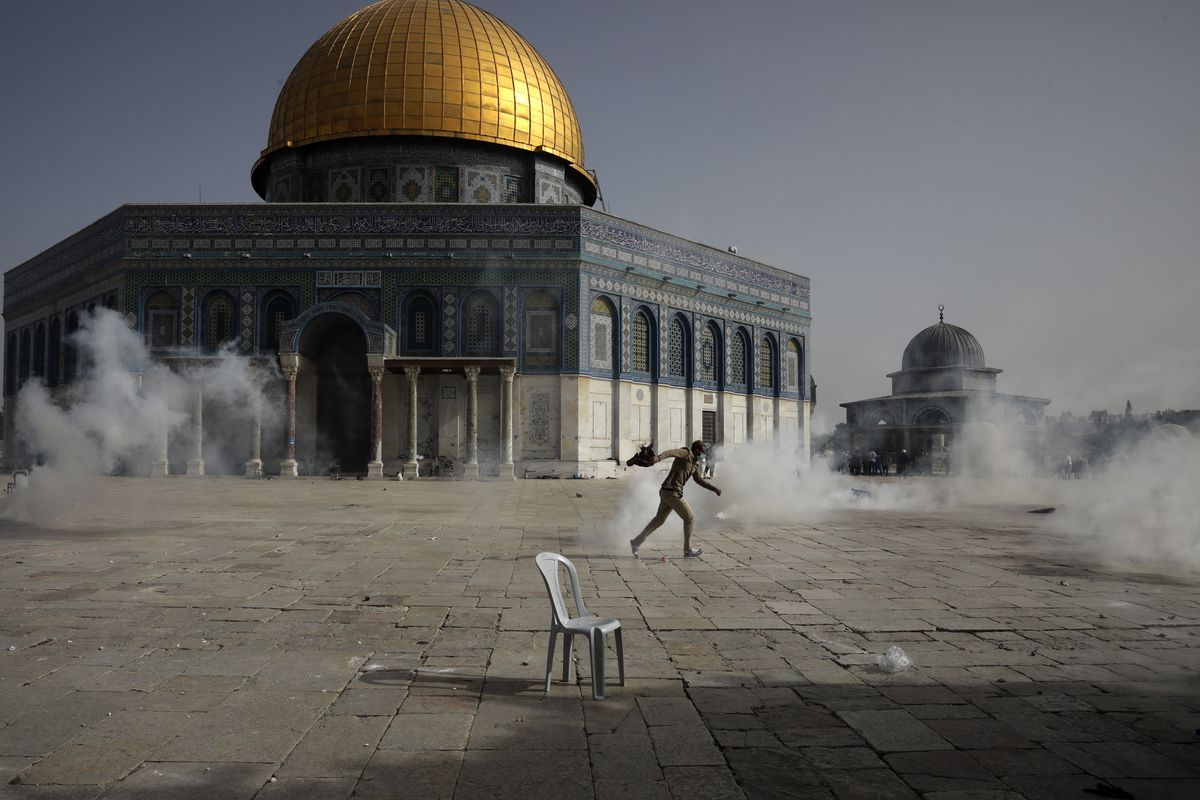 We are a group of faith-based organizations and religious leaders who have been working together for more than four years to combat the hateful and divisive policies of the last U.S. Administration. We come together again today in response to the recent escalation of violence in the Holy Land.

Together, we condemn the senseless and abhorrent violence that has shrouded the Holy Land and inflicted a deep numbing pain in faith communities across the world. As faith leaders, we were especially troubled by the May 7, 2021 attack on the last Friday of Ramadan as worshippers celebrated one of the holiest days of the year at Al-Aqsa mosque in Jerusalem, an internationally sanctioned site of worship. We will always condemn attacks on houses of worship and the murders of people of faith in their holy spaces, including when the Tree of Life Synagogue was attacked in 2018, or when the mosques in Christchurch, New Zealand were attacked in 2019, or when the Emanuel African Methodist Episcopal Church in Charleston was attacked in 2015, and the Sikh Gurdwara in Wisconsin in 2012. We condemn all the ways in which violence is used in the name of religion, including the use of attrition against innocent civilians. These are not our ways of faith. Any act of hate against any one of us is an act of hate against all of us.

As we have learned from our experiences in the United States over the past couple of years, where we have struggled together for #Black Lives Matter, have elected our first Native American congresswomen, recognized the #MeTooMovement, and democratically ousted hateful forces of white supremacy, this is the time to recognize the need for shared security in our global system. Israel cannot be secure if Palestinians are not secure and Palestine cannot be secure if Israelis are not secure. We are only as secure as the least among us.

The current crisis results from problematic political and moral leadership that has created a breeding ground for extremism and violence. Since the time of Ottoman and the British empires to the present day, world leaders have failed to demonstrate long term, deep commitment to human rights and conflict resolution. Some leaders today make political use of the historical trauma of the Jewish people in perpetuating the occupation of Palestinian towns and lands. Some Americans on the religious right have turned a blind eye to such injustices in order to promote millenarian narratives. In short, too many leaders have joined to create conditions that have continued to keep the Palestinian people under military occupation and justice and peace for all out of reach.

To move forward, we must begin by acknowledging the failures of decisions, leadership, and sham peace processes, that have led to the following present-day facts on the ground:

1. The Palestinian people continue to live under military occupation, which began long before any rocket attacks. This system disenfranchises the Palestinian people of their land, homes, mobility, rights and resources so that it cannot even be a viable entity in itself; while Palestinians within Israel are treated as third class citizens.
2. Israelis of all backgrounds continue to be at risk of their lives and safety, reinforcing their mistrust and fear, while the current ruling parties in Israel continue to corrupt its democracy, silencing those fighting for peace and working for human rights to end the occupation.
3. Reactionary forces on the Israeli and Palestinian sides have been strengthened, creating a dangerous discourse based on mutual destruction, making any meaningful movement on the path to peace nearly impossible.

The dominant narrative of equating Israel, the fifth largest military power in the world, with Hamas creates a false equivalency that hides the real asymmetry of power in this conflict. While the violence, suffering, and deaths are not distributed equally, all violence against civilians is wrong. We insist on saying that both of these things are true. Innocent victims deserve solidarity on all sides. Despite its rhetoric and its real threats, Hamas alone is no military match for the IDF. It is misleading for media and policymakers to frame the conflict around counting the number of rockets fired from each side, as deplorable as that is. Instead, focus should be on ending the occupation and achieving justice and equality for Palestinians, who have been living under military occupation for so long, and realizing the right to Palestinian self-determination, including access to their land, homes, roads, healthcare, education, and jobs. Only when justice is secured can we work towards a resolution offering shared security and prosperity for both the Israeli and Palestinian people.

As faith-based organizations and religious leaders:

1. We call upon all parties involved in the conflict to immediately cease retaliatory actions so that a cease fire can be implemented as soon as possible.
2. We call upon Israelis and Palestinians, despite bitter histories and continued anguish, to find common ground, and to stand up for each other to promote peace and security for all the people in the Holy Land.
3. We call upon the US Government to cease its asymmetric role in Israeli-Palestinian conflict, act as an ally of both Israelis and Palestinians, and withdraw military assistance to Israel and other countries in the Middle East when that assistance is being used to perpetuate injustice and terror.
4. We call upon religious leaders in the Holy Land, (Jews, Muslims and Christians) to live out their deeply held and widely shared values of compassion for the religious other. We call upon you all individually and collectively to speak truth to power.
5. We call upon the citizens of the world to stand up for the weak and oppressed so no more lives are sacrificed at the false altar of ego, retaliation, hateful nationalism, or oppression, and to respond forcefully to anti-Muslim and anti-Jewish rhetoric wherever it appears.
6. We uplift and amplify the work of peacemaking groups in the Holy Land (such as Standing Together, Combatants for Peace, etc.) who are trying to lay the foundations for peace despite the adversities they face.

As a group of Muslim, Jewish, Christian, and other multi-faith communities who have built trust and respect, who show up for each other in times of suffering and in times of celebration, and whose lives are enriched by these connections, we pray that we can serve as a model for multi-faith communities in other countries. Listen to each other, learn from each other, mourn together, celebrate together, and perhaps one day we will succeed in building a world filled with justice together. 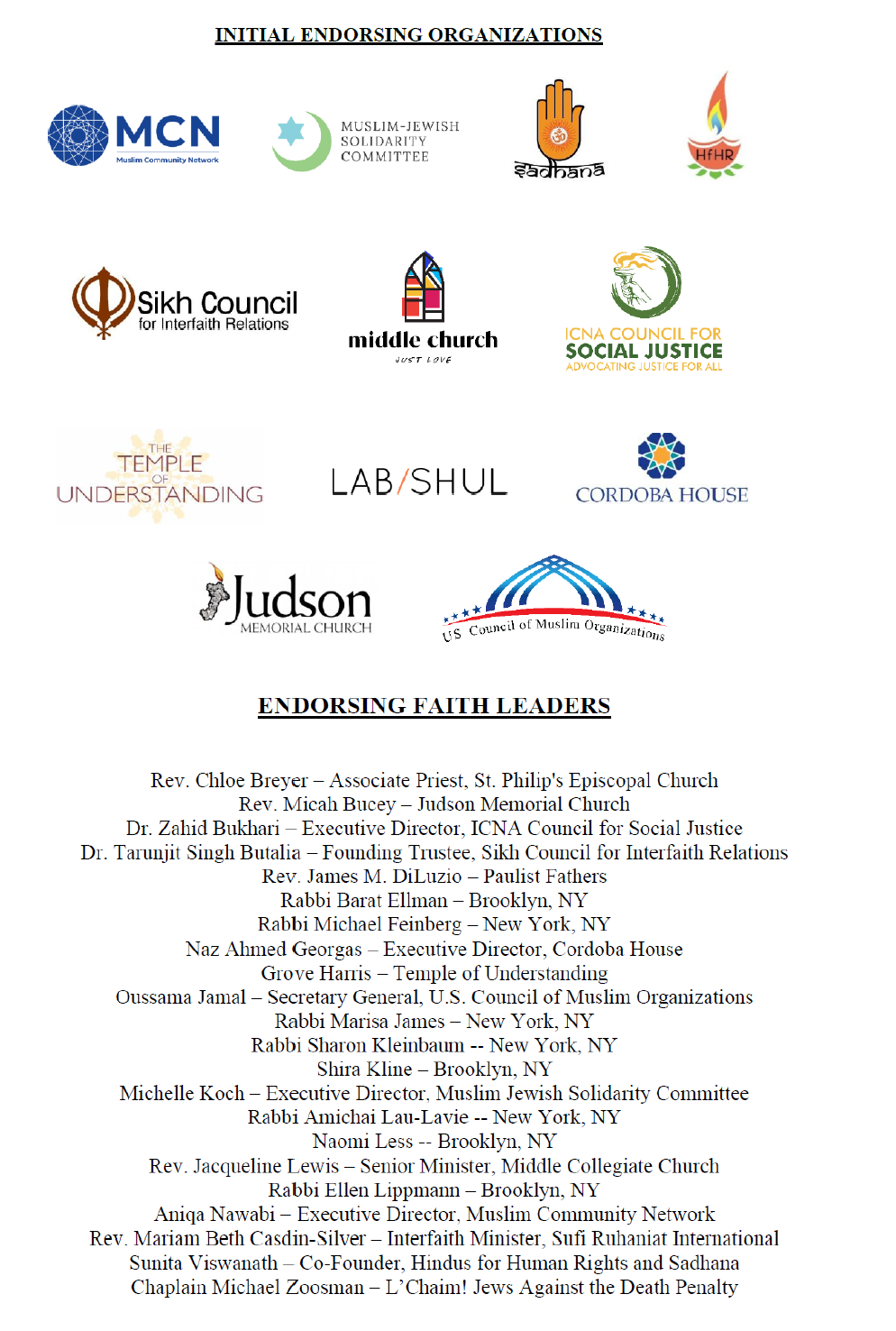