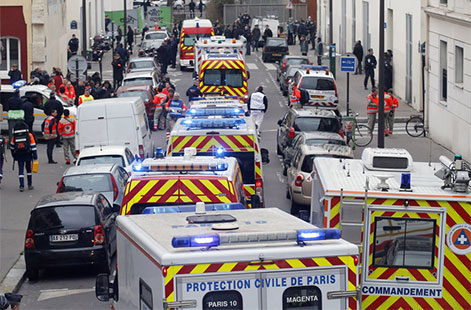 The Islamic Circle of North America strongly condemns the deadly attack in Paris committed in the name of Islam and in the name of defending Prophet Muhammad, peace be upon him. The attack on the offices of the French satirical magazine, Charlie Hebdo, in Paris, which killed 12 people, is not only a cowardly and ghastly act, it also goes against everything taught by the person in whose name the heinous crime was done.

Defaming and insulting the noble character of the Prophet of Allah

, is not a new phenomenon. During his lifetime, he endured attacks of all kinds, including physical, psychological, emotional, and social. Despite this, he never took revenge against those who offended him. At the most, he would call on God for help and protection.

During the first thirteen years of his life in Makkah, he and his followers faced severe persecution from the Quraysh, the ruling tribe of the region. They threw the entrails of a camel on him while he was in prostration at the Ka’bah. They insulted him and planned several times to kill him. His companions asked him to curse them and to to this the Prophet

, replied, “I have not been sent to lay a curse upon men but to be a blessing to them.” [Muslim, Book of Hadith]

His opponents continuously treated him and his companions unjustly and cruelly, and he continued to pray for them. The eminence of his noble character can be discerned from his experience in Taif. He visited the city to invite its people to Islam. They not only rejected him, they stoned him and expelled him from their place. He was still bleeding from his wounds when Angel Gabriel came to him and said:

“Allah has heard what your people say to you and how they reject you. He has ordered the angels of the mountains to obey whatever you tell them to do.” The angel of the mountains called him, greeted him and said, “Send me to do what you wish. If you wish, I will crush them between the two mountains of Makkah.”

said, “Rather, I hope that Allah will bring forth from their loins those who will worship Allah alone and not associate anything with Him.” [Al-Bukhari]

Utlimately, when he gained victory over the people who had defamed him, insulted him, and harmed him, their leaders came to him fearing that he would kill them indiscriminately, as conquerors generally did. Instead, he said,

Goethe, a famous German writer, artist, and politician of the 1800s, wrote about Prophet Muhammad

“We Europeans with all our concepts and ideas have not yet attained that which Muhammad attained, and no one will ever surpass him. I searched in history for the loftiest example for man to follow, and I found it in the Prophet Muhammad.”

A true defense of the Prophet of Islam

, will never be achieved through bombs and bullets, but through living a life of mercy reflective of his great character, love, compassion and pardon.

ICNA therefore calls on all Muslims to defend the Prophet

, by following his great example and not through violence.