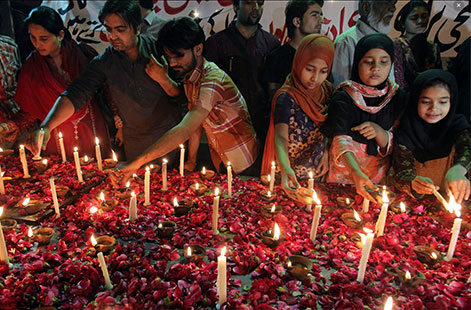 The Islamic Circle of North America (ICNA) issued a press release today condemning the suicide bombings outside Christian churches in Lahore, Pakistan that killed 15 people and injured more than 70.

“ICNA is appalled by these bombings,” said Naeem Baig, President of ICNA.

“We urge the Pakistani government to bring the perpetrators to justice. We also extend our condolences to families of the victims; our thoughts and prayers are with them in this difficult time.

We remind those in authority in Pakistan of their duty with the following verse from the Quran:

‘And were it not that Allah checks the people, some by means of others, there would have been demolished monasteries, churches, synagogues, and mosques in which the name of Allah is much mentioned. And Allah will surely support those who support Him. Indeed, Allah is Powerful and Exalted in Might.’ (Qur’an 22:40)

We must remember that our Prophet Muhammad, peace and blessings be upon him, also granted protection to all who lived under the Islamic state, regardless of race or religion. We are deeply alarmed by this rise in this extremism in Pakistan.

This violence is a setback in Pakistan’s struggle for an equal and inclusive society. We call on the Pakistani government and the people of Pakistan to protect the rights of religious minorities in the country, including the right to live and worship in safety.”