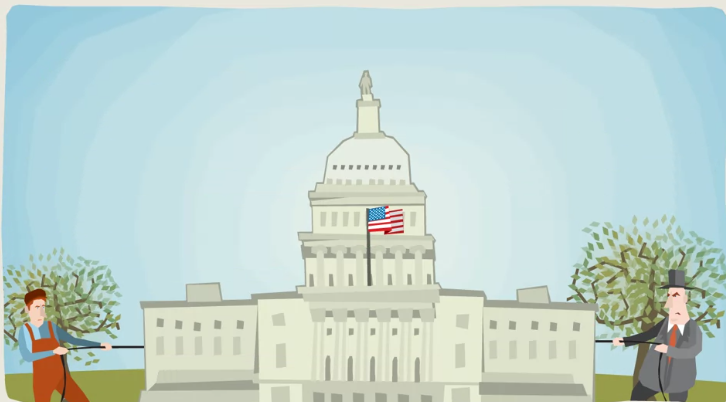 [Video is at end of article below]

Some of the biggest banks in the world are expected to plead guilty to felonies this week.  Felonies! They are scandalous crimes, too: fraud and antitrust violations.

Finally, America will see members of the class that crashed the economy dressed in black and white suits that are hardly the Brooks Brothers pinstripes to which they’ve grown accustomed.

Oh, wait, no. The New York Times says these felons will just pay some fines and go about their business of playing roulette with the world economy. Of course they won’t face prison like normal criminals. They’re bankers! Members of the exclusive Too Big to Jail Club. They’re protected. Just like millionaires and CEOs are. A CEO can, for example, be fired for failing to produce but still get $21 million in severance, then lose a well-financed race for U.S. Senateand still be considered a viable presidential candidate. That’s because the rules are written for them. The economy currently is constructed to ensure their enrichment.

The felonious banks, Barclays, Citigroup, JPMorgan Chase and Royal Bank of Scotland will plead guilty to illegally making a bundle for themselves at the expense of travelers, businesses and others by manipulating the price of foreign currencies.

Even so, not one bank CEO will lose his million-dollar bonus, let alone his job. They’ll laugh all the way to the, well, to the bank. Just like oil companies snicker as they grab government subsidies [welfare] even though they’re among the most profitable corporations in the world. Just like hedge fund operators chuckle while luxuriating in their special, super-low tax rate.

Over the past 35 years, the rules have been written to facilitate trickle-up economics. The theory was that in a financial structure that guaranteed the rich received all income gains in the economy, millionaires and billionaires might let a couple of nickels slip out of their bulging pockets for workers to try to catch.

Unfortunately for workers, Brooks Brothers suits have really deep pockets. Almost nothing fell out of those pouches for workers. Their wages stagnated for decades while the rules facilitated the pinstriped boys getting richer and richer.

Last year, the pay gap between CEOs and typical workers widened to 373-to-1. That means for every $1 a worker earned, the CEO took $373. In just 7 minutes of slurping coffee or gazing out his penthouse office window, the typical CEO was handed more money than the average worker earned for 40 hours of labor.

Those numbers were very different before the dawn of trickle up. In 1965, theCEO-to-worker compensation ratio was 20-to-1. For every $1 a worker earned, the CEO got $20. And still, corporations made profits! And lots of people wanted to be CEOs! It was a time when the economic rules enabled workers to receive a larger share of the wealth that their labor helped create.

At a press conference in Washington, D.C., last week, New York City Mayor Bill de Blasio explained this situation in simple terms: “The system is rigged to benefit those at the top and to leave everybody else behind.”

De Blasio was surrounded by liberal lawmakers and leaders including former Vermont Gov. Howard Dean, Rev. Al Sharpton, U.S. Sen. Jeff Merkeley and me, all of whom spoke in favor of the Progressive Agenda to Combat Income Inequality that the mayor presented. It is a 13-point plan to change the rules to ease the lives of workers and to increase opportunity for all Americans.

The same day, de Blasio spoke at the Roosevelt Institute, a nonprofit group devoted to restoring America’s promise of opportunity for all. At that event, the institute released a report by its chief economist, the Nobel laureate Joseph Stiglitz. It’s called Rewriting the Rules of the American Economy.

It begins with a damning statement:  “The American economy no longer works for most Americans. We pride ourselves on being the land of opportunity and creating the first middle-class society, yet profound and largely overlooked changes have put the middle-class life increasingly out of reach for the majority of Americans. At the same time, we have enabled a small percentage of the population to take home the lion’s share of economic gains.”

“Until economic and social rules work for all Americans,” it says, “they’re not working.”

The report examines the rules that have over the past several decades created the situation in which “the benefits of economic growth have disproportionately gone to the top 20 percent of the population while the share of national income going to the bottom 99 percent has fallen.”

Stiglitz points out that the resulting income inequality, now at the highest level since the heyday of robber barons, is not an irrevocable destiny preordained by some goofy invisible hand of the market. It is, instead, a result of rules. Rules that can be changed.

The report recommends a comprehensive series of changes, and includes all of the points in The Progressive Agenda to Combat Income Inequality released by de Blasio.

Both seek to raise wages, support working families with policies like paid sick leave and universal child care and reverse some of the rules passed in homage to corporations and CEOs. That includes ending tax breaks for corporations that ship jobs overseas as well as the special break that hedge fund honchos get.

The promise of America is that anyone who works hard and plays by the rules can earn a middle-class life. That promise is betrayed when the system provides a tiny class of Americans with special treatment, including a get-out-of-jail-free card when they commit fraud to make untold millions.

Leo W. Gerard president of the United Steelworkers union. President Barack Obama appointed him to the President’s Advisory Committee on Trade Policy and Negotiations.  Follow him on Twitter: @USWBlogger