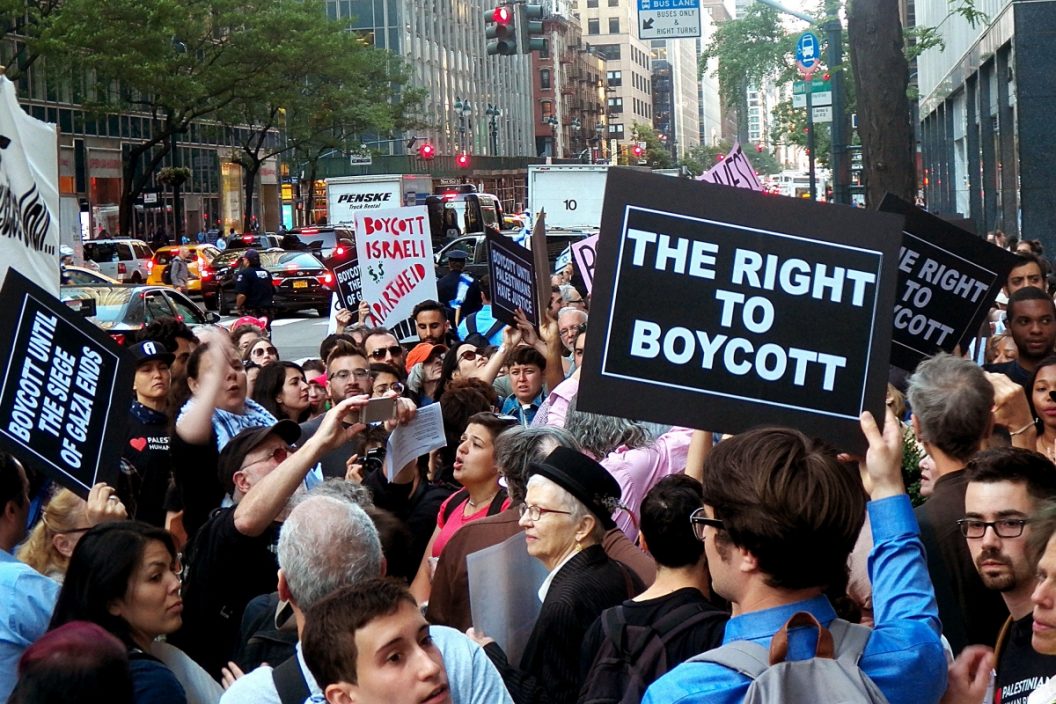 Last week, the ACLU came out against a bill that would criminalize constitutionally protected boycotts and certain speech targeting Israel. The Israel Anti-Boycott Act, which was introduced in both the House and Senate earlier this year, would expand a 1970s-era export law and expose a range of activity to sweeping penalties, including criminal prosecution.

Since we sent our letter to Congress setting out our opposition to the bill, we’ve received dozens of questions about what it actually does. We attempt to answer the most common ones below.

1. What law does the proposed Israel Anti-Boycott Act seek to amend?

The Israel Anti-Boycott Act principally seeks to amend the Export Administration Act of 1979. That law prohibits “U.S. persons” — a term that refers to both individuals and companies — from taking certain actions to comply with or support a boycott imposed by a foreign country against another country that is friendly to the United States.

The 1979 law responded to the Arab League’s boycott of Israel. At the time, countries in the Arab League would require U.S. businesses to boycott Israel and Israeli companies, and furnish information to verify the boycott, as a condition of doing business. To prevent foreign countries from dragooning U.S. businesses into these compulsory boycotts, the 1979 law prohibited U.S. companies from complying with foreign boycott requirements.

Specifically, the 1979 law prohibits U.S. persons from boycotting a friendly country — i.e., by refusing to do business with the boycotted country or with a company operating in that country — pursuant to an agreement with, requirement of, or request from another country. It also prohibits the “furnishing of information” about U.S. persons’ business relationships in the boycotted country.

For example, suppose a U.S. company had wanted to do business in Saudi Arabia, but Saudi Arabia would allow it to operate in its territory only if the company suspended business ties with Israel and reported its dealings to prove its compliance. The 1979 law would prohibit the U.S. company from complying with the Saudi government’s boycott demand and from furnishing information about its business dealings with Israel.

2. How does the proposed Israel Anti-Boycott Act change the 1979 law?

The Israel Anti-Boycott Act was drafted in response to the U.N. Human Rights Council’s (UNHRC) March 2016 resolution calling for the creation of a database of companies operating in the occupied Palestinian territories. The bill’s statement of policy declares that Congress opposes the UNHRC resolution and “views such policies as actions to boycott, divest from, or sanction Israel.”

The bill’s operative provisions expand the 1979 law by prohibiting U.S. persons from boycotting Israel and Israeli businesses — including businesses operating in the occupied Palestinian territories — in adherence to boycotts called for by international governmental organizations, such as the United Nations and the European Union. The bill would also prohibit U.S. persons from not only furnishing, but even requesting information about any person’s business relations with Israel, if done to support a foreign country’s or international governmental organization’s call for boycott.

The bill states that violators shall be fined in accordance with the penalties laid out in Section 206 of the International Emergency Economic Powers Act. That section provides that violations are punishable by a civil penalty that could reach $250,000 and that willful violations are subject to criminal prosecution, which could result in a fine of up to $1 million and 20 years in prison.

The existing law would be amended as follows (with amendments in bold):

As written, the bill would prohibit a U.S. person from:

3. If all this bill does is add “international governmental organizations” to an existing law, why is that so problematic?

The bill’s amendments would significantly expand the 1979 law’s prohibitions, untethering them from Congress’ original concern about foreign governments coercing U.S businesses into boycotting friendly countries in exchange for commercial relations. Instead, the bill risks penalizing U.S. individuals and companies that support a U.N.-led boycott movement by refusing to purchase goods made by certain companies.

In other words, the original intent of the law was to protect U.S. companies from the coercion of foreign governments. While the law may have been overbroad, Congress’ new amendments make the problem worse. Now, it is the U.S. government prohibiting people from participating in certain boycotts that they wish to join.

On its face, the bill appears to directly prohibit boycott activity that is protected under the First Amendment. Even if the bill could be interpreted more narrowly, as some of its supporters claim, its broad language could still chill protected expression by scaring people into self-censorship. Either way, the bill would impose serious First Amendment harms.

Some people have argued that the bill effectively accomplishes nothing, because no international governmental organization is currently engaged in a boycott against Israel. But, as noted above, the bill’s statement of policy expressly opposes the UNHRC’s March 2016 resolution calling for a database of companies operating in the occupied Palestinian territories, and it declares that Congress views “such policies as actions to boycott, divest from, or sanction Israel.”

Reading the bill in light of its own statement of policy, a reasonable person could plausibly infer that the UNHRC’s March 2016 resolution amounts to a “request” for a boycott within the meaning of the bill. That would mean that anyone who attempts to support the resolution, as Congress has described it, by refusing to purchase goods made in Israel or the occupied Palestinian territories would be violating the law. Given the severe penalties at stake, many people would undoubtedly choose to refrain rather than risk prosecution.

But even apart from limiting the right to boycott by refusing to purchase goods for political reasons, the bill infringes on pure speech. It prohibits even requests for information about whether a person is doing business in Israel in order to support a boycott of Israel, regardless of whether the requester is actually engaged in a boycott. This additional prohibition will chill people from seeking information about companies boycotting Israel or engaged in business dealings in Israel.

For example, suppose a consumer wishes to make a decision about whether to purchase a product made by a certain company. She posts a request on Facebook seeking information about that company’s environmental, labor rights, or human rights record. Her request is protected speech. But if the company she is asking about operates in the occupied Palestinian territories, and she is asking about that activity in order to support the U.N.’s resolution and then publicly shares any information she receives, she would have reason to fear prosecution under the law.

4. If the law specifically refers to boycotts initiated by international governmental organizations, would it affect BDS activists?

The Boycott, Divestment, Sanctions (BDS) movement is a global campaign that seeks to apply economic and political pressure on Israel to comply with international law. Because the BDS movement is not itself an international governmental organization, support for BDS and its activities should not violate the bill’s provisions. However, BDS’s members and supporters may refer to international governmental organizations’ boycott requests or policies to support their own advocacy. Thus, the bill threatens to sanction a BDS-supporting individual or company that declares an intention to boycott every business listed in the UNHRC database. The bill also threatens to sanction BDS supporters who identify companies dealing with businesses listed in the UNHRC database.

Additionally, even though BDS participation does not by itself violate the bill’s provisions, BDS members and supporters may fear that they will be targeted for investigation based on their affiliation and expressive activities, and self-censor accordingly.

5. Some people have claimed that the Export Administration Act is about corporations, not individuals, so why do you think individuals could be affected under this bill?

The term “U.S. person” includes all individuals, corporations and unincorporated associations resident in the United States, including the permanent domestic affiliates of foreign concerns. U.S. persons also include U.S. citizens abroad (except when they reside abroad and are employed by non-U.S. persons) and the controlled in fact affiliates of domestic concerns.

Even if the government has in the past chosen to pursue penalties against corporations, not individuals, the bill’s language plainly applies to individuals. And even if the government promises not to prosecute individual consumers under the bill, such a promise can be changed at any time, at the whim of any presidential administration. Because the bill applies to individuals, flesh and blood people have reason to be concerned that their own protected boycott activity and speech could violate the law.

6. Why doesn’t the ACLU challenge the original law?

The ACLU believes that the 1979 law is overbroad. However, courts upheld the law against First Amendment challenge, concluding that it was a sufficiently narrow attempt to prevent foreign countries from dragooning American businesses into boycotts against Israel, thereby raising “delicate foreign policy questions.” Whatever their merits, theserulings envisioned a narrow scope for the law and did not involve challenges by individuals engaged in political speech and advocacy.

The bill goes beyond any such narrow scope. The UNHRC does not engage in trade with U.S. companies, and the law is not narrowly tailored to situations involving export relationships that trigger foreign policy concerns. The bill threatens to sanction businesses and individuals who seek to demonstrate their support for the UNHRC’s March 2016 resolution — and similar future policies by the EU or international governmental organizations — through protected speech and boycott activity.