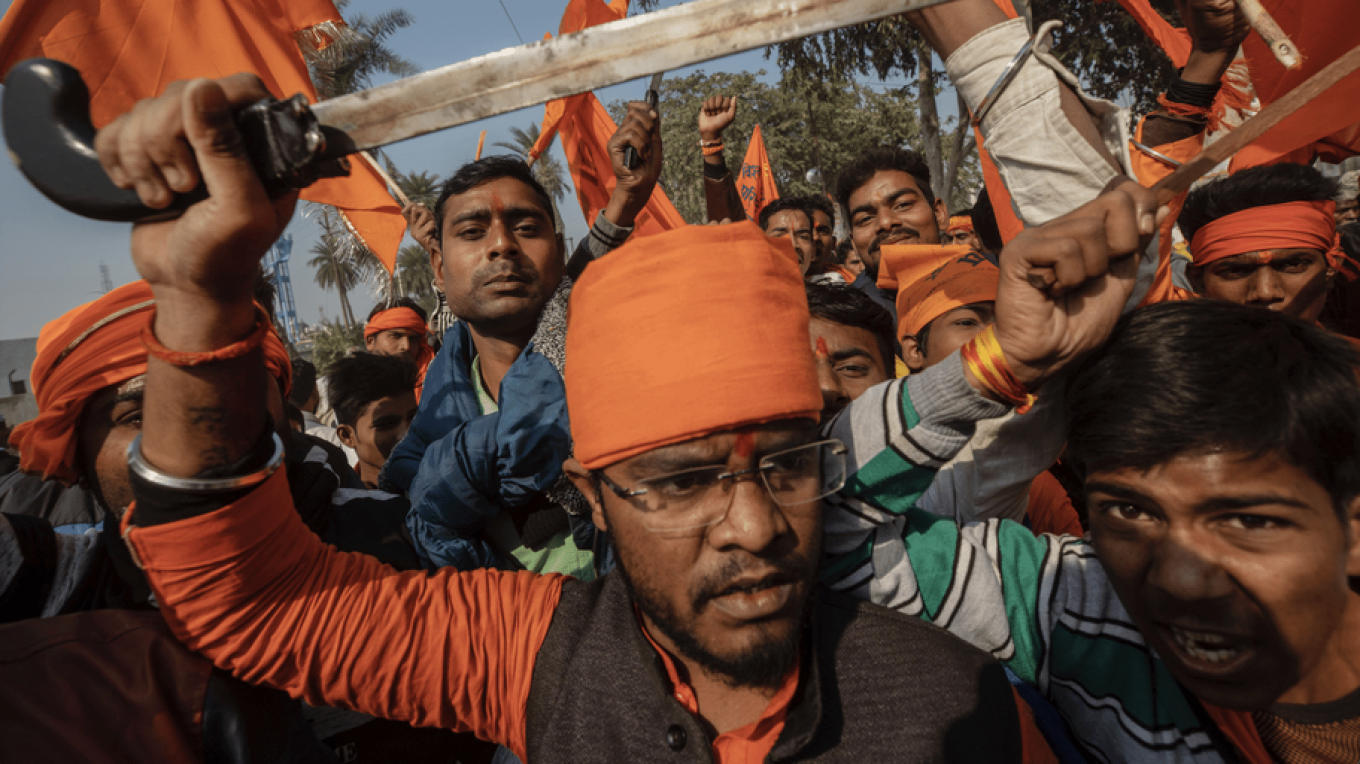 They bought Indian food from booths and settled on the grass to watch traditional song and dance performances. The holiday had special significance this year: Aug. 15 was the 75th anniversary of the end of British rule.

Then, about a dozen people, most of whom were Indian American, marched silently past the crowd, carrying signs that read “Abolish caste” and “Protect India’s Muslim lives.”

A few men from the independence celebration charged at the protesters, grabbing the signs, breaking them and throwing them into trash cans. Some shouted obscenities in Hindi-Urdu. They called the protesters “stupid Muslims” and yelled at them to “get out of here.”

Through a microphone, an announcer led a chant: “Bharat Mata ki jai” — “Victory for Mother India.”

“We are Indian,” Rita Kaur, a protester who is Sikh and was born and raised in Southern California, said later. “We are simply speaking for Indians who are harmed relentlessly.”

For many of the majority Hindu religion, the day represents the end of colonialism and the birth of India as an independent nation that became the world’s largest democracy.

For many Muslims and other minorities, it represents the bloody partition of the former British colony into India and Pakistan and the persecution of non-Hindus and lower castes.

Since Narendra Modi became prime minister of India in 2014, his naked appeals to patriotism and his party’s frequent scapegoating of minorities, especially Muslims, have resonated with some who believe he has made the country stronger and safer. Meanwhile, religious minorities, especially Muslims, have faced mob attacks from Hindu vigilante groups.

Those conflicts have sometimes spilled over into Indian communities in the United States.

An Indian Independence Day parade last month in Edison, N.J., featured a bulldozer with a photo of Modi — a provocative symbol when local officials in India have used bulldozers to demolish the homes of Muslims. Parade organizers later apologized.

In Silicon Valley, discrimination against people from the Dalit caste surfaced in a lawsuit filed in 2020 by California officials on behalf of an engineer at Cisco Systems who alleged that higher-caste supervisors gave him lower pay and fewer opportunities. At Google this year, a talk about caste equity was canceled after some employees accused the speaker of being anti-Hindu.

“This poison of sectarian hatred has been getting more widespread,” said Rohit Chopra, a communications professor at Santa Clara University who has long been critical of Modi and his supporters for promoting Hindu nationalism. “That same pattern of increasing aggression and impunity seems to have replicated itself in the diaspora.”

Organizers of the Anaheim Independence Day celebration did not respond to requests for comment. In a statement to NBC Asian America, organizer Manoj Agrawal said the event was “not religion-biased” and included many Muslim vendors.

Agrawal said the protesters intended “to create trouble and then record something which can help them to showcase something.”

The Hindu American Foundation, a nonprofit advocacy group, defended the Independence Day organizers. The protesters were seeking to “disrupt children performing on stage inside the event,” the group’s managing director, Samir Kalra, said in a statement.

Orange County resident Waqas Syed, a member of the Coalition for Democracy and Secularism in India, said it is common for protesters against caste and religious discrimination to be harassed.

But Syed, who is also a director of Justice America, which focuses on Indian issues in the U.S., said the conflicts in Anaheim and New Jersey were a new low.

“Just five years ago, this event that you witnessed a couple of weeks ago would never have happened. Since the growth of Hindutva in all areas, this has become possible, and this is going to happen in much more areas,” he said, using a term for Hindu nationalism.

In a recent column in IndiaWest Journal, Shakeel Syed explained why he refuses to celebrate Indian Independence Day.

Syed, executive director of the South Asian Network in Artesia, has fond memories of growing up in India and is grateful for the values he learned in a relatively secular society. But that India no longer exists, he wrote.

“The value of ‘fellowship’ that I learned from my teachers, neighbors, and friends (irrespective of their religion and ethnicity) nurtured a shared spirit of decency, mutual respect, and unconditional love for each other and the greater good,” Syed, who is Muslim and left India 40 years ago, wrote. “Today’s India is obliterating … fellowship with bigotry, fanaticism, xenophobia, and intolerance, organized and institutionalized by the State.”

In Artesia’s Little India, Zameer Batta said he does not agree with how India treats its Muslim citizens. He shrugged when informed of the events in Anaheim and New Jersey.

“I don’t agree with the treatment, but what can I do?” Batta, 52, said as he ate a lunch of lentils and vegetarian thali.

Batta, who is Muslim and of Indian origin, grew up in Uganda. He hopes that marriages between Hindus and Muslims, as well as the rise of Muslim Bollywood actors, can bring communities together.

Dimpel Gandhi, a 40-year-old beauty salon worker who came from India 20 years ago, said “regular people” and the “new generation” are not thinking about religious tensions. In India, her family lives next to a Muslim family, and “they are always together,” she said.

Asked what she thought of the recent conflicts among Indian Americans in the U.S., she said, “Everyone is good. Everyone should respect.”

Then she fell silent, shaking her head.