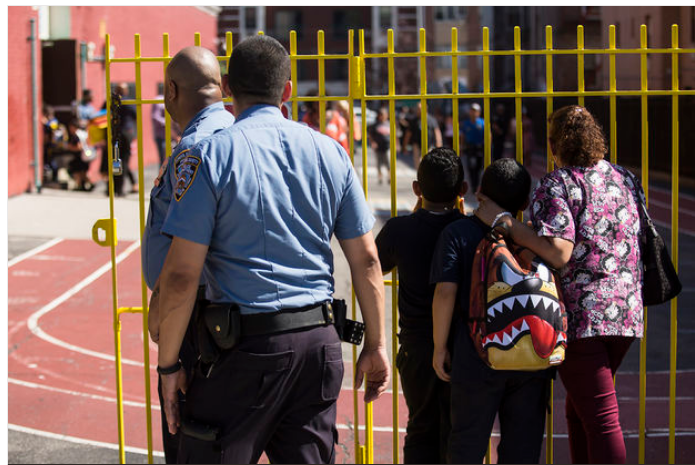 Students and teachers across the school system know that bullying is not an isolated problem, after the issue was thrust into the spotlight last week when a teen saying he endured constant harassment at school fatally stabbed a classmate and injured another.

But it can be hard for parents to know what’s going on at their children’s schools and difficult for students and even teachers to find the support they need.

Students at nearly 100 percent of the city’s roughly 1,120 middle and high schools — both traditional public schools and charters — reported seeing peers bully, harass or intimidate students at least some of the time, according to last year’s Department of Education survey results.

Teachers in all grades at nearly 95 percent of the city’s roughly 1,900 traditional public schools and charters reported seeing at least some students bully, harass or intimidate their peers, the results showed.

At the same time however, officially reported incidents of bullying appear to be scant at many schools, and the city has come under fire in audits for under-reporting bullying incidents.

The whole school community and climate has a role to play when it comes to bullying, experts say, and at a Monday event in East Harlem, Schools Chancellor Carmen Fariña noted that two weeks of training were recently added for prospective school safety agents.

Their behavior is important for setting the tone, she said. For instance, “How do you smile at someone when they walk in the building?” she said.

For the next several weeks, professional development for teachers at all schools will focus on de-escalation techniques and bullying, she added.

Here are some tips for parents concerned about bullying at their children’s schools.

Talk to your children in a way that will prompt real responses.

When Fariña talks to her grandchildren, who attend city public schools, she said she likes to do it around the dinner table when they feel at ease.

“You need to sit comfortably at a table. Breaking bread is really, really important,” she said. “Your homes have to be safe areas. Kids will tell you something if you phrase it the right way.”

Experts agree on the importance of asking questions that prompt specific information rather than a “yes” or “no” response.

Jed Lippard, head of the Bank Street School for Children and dean of children’s programs at Bank Street College, advised asking questions like, “Who did you sit next to at lunch today? What’s one thing you did today that made you proud? Who is someone you haven’t played with this week that you would like to play with?”

Asking a question like “How did you help somebody today?” provides a way to convey your values, he said.

“When were you the most bored today?” acknowledges that kids are sometimes bored at school.

These are ways to tap into things that kids experience but might not have an easy way to express, he explained.

Recognize some warning signs of bullying.

Some telltale signs from students include them not wanting to go to school, saying they’re not feeling well, or not wanting to play with other children, said Sally Cohen, professor at NYU Meyers College of Nursing.

She was part of a team behind a report for the National Academies of Sciences, Engineering, and Medicine on bullying prevention among children and youth.

Targeted kids tend to be “anybody who is different,” she said.

So, if a school has children predominantly of one race, a child of a different group might be taunted. Those with learning challenges, social challenges or “challenges at home” tend to be singled out. A lot of bullying is also faith-based, she added.

Some taunts can be considered fooling around if they’re one-off events, but when they are repeated, it becomes bullying, she said.

Bullying tends to occur in school areas that are unsupervised, like playgrounds, hallways and locker rooms.

Cohen’s son, who was bullied growing up, would tell his mom things like, “’Guess what happened in school today? I got locked in the school bathroom,’” she recalled. ” I would say, ‘You got locked in, or someone locked you in?’”

Parents and kids must find allies at school.

It is important that every child feels known by at least one adult in the school, Lippard said.

“That is key. When a kid is experiencing crisis, an adult needs to be on the case,” he stressed.

It also helps for parents to find an ally at the school like a friendly teacher from five years ago or the school nurse, Cohen said.

“Often that’s where students — who are not feeling well, have phobias, are afraid of lunchroom — go: to the nurse,” Cohen said. “It was the nurse who called me in ninth grade, saying, ‘Don’t you know your son’s been hazed?’”

At a different school, Cohen could not find an ally.

“I asked the principal what could she do to ensure my son is physically and emotionally safe,” she said.

Cohen asked if an aide could follow the boy in the hallway, but that request was denied. The principal instead said the bully was suspended for the rest of the year, but Cohen worried what would happen when the bully returned in the fall. She feared he would be even more angry with her son.

Ultimately, she pulled her son out of the school.

It is important to also help the child who bullies.

There’s no evidence that zero-tolerance policies like suspending bullies works, and it is equally important to look at bullies who may have been bullied themselves, Cohen said.

“Being in pediatrics, I see parents hitting young children or children sitting alone in their stroller crying,” she explained. “The children who are the bullies are missing something important in their life.”

Bullies aren’t created in a vacuum, agreed Ed Hamilton, a New York-based author whose new novel “Lords of the Schoolyard” was written from the perspective of bullies.

He began writing the book in 2002, after the Columbine shooting, when bullies were blamed for causing the shooters to act.

“This issue has continued to be a problem and people are seeing now that simplistic solutions such as increasing school security or instituting draconian punishments are not workable,” Hamilton said. “There needs to a more flexible dialogue to address the problems of both bullies and their victims.”

A growing number of schools have their students sign anti-bullying pledges, asking not only that they don’t bully others but that they speak out if they see peers doing so.

Because she views bullying as a mental-health issue, Cohen believes resources should be focused on that as opposed to things like restorative justice circles, where students have a forum to share their emotions.

“It has to be the whole school,” she said. “There’s a lot of blame on teachers for not catching it. It’s everyone’s responsibility.”

But in a “stressed out” educational system that focuses on test scores, it’s hard for many teachers to focus on social-emotional development, Lippard said.

“The social-emotional realm of learning is just as important as the traditional academic realm,” he said. “Particularly in the early grades: What does it mean to be a member of community? How do we get along and collaborate? How do we negotiate different opinions and conflict?”

He added, “Cumulatively, that pays dividends over time.”