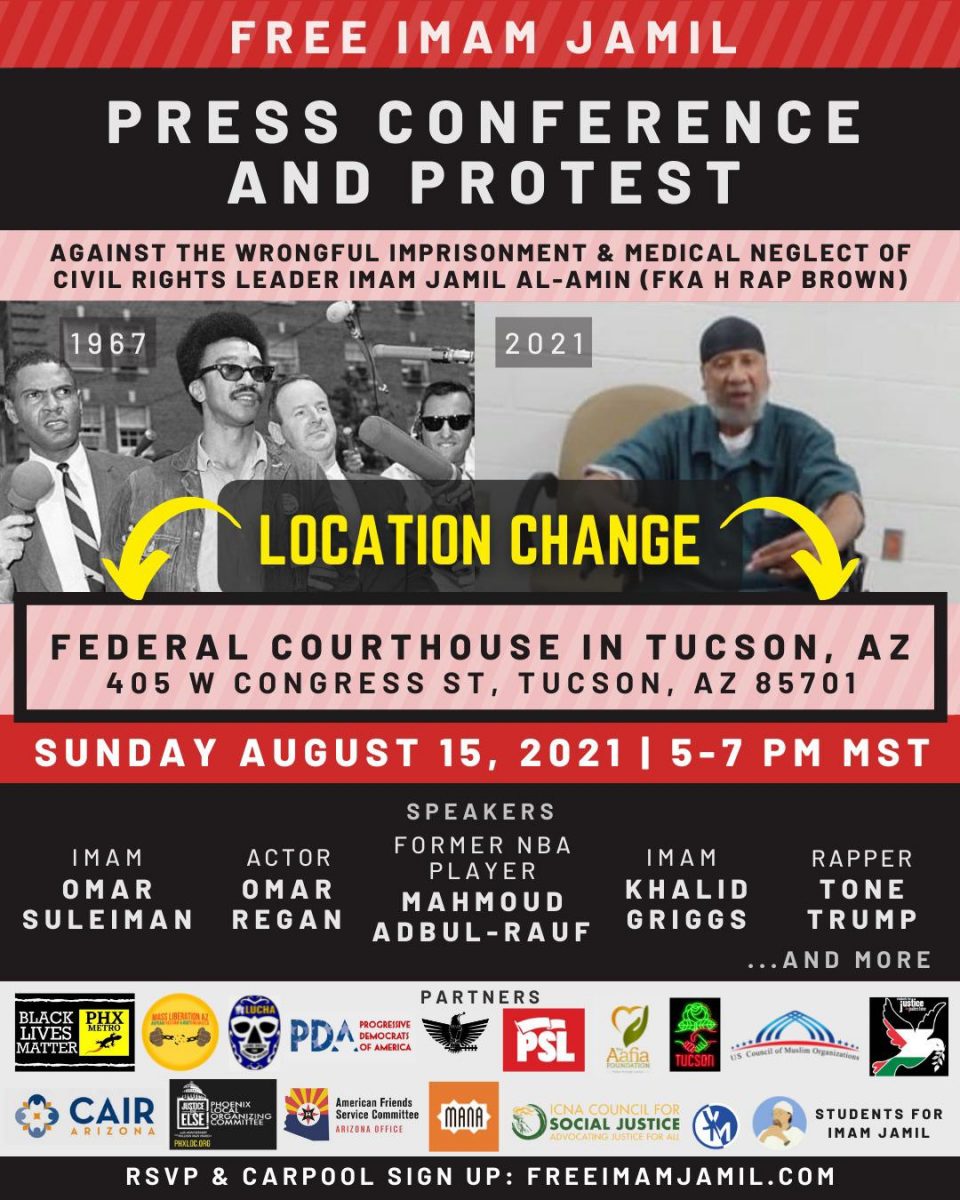 (TUCSON, AZ – 08/12/2021) On Sunday, August 15th, a coalition of local and national civil rights groups and human rights organizations plan to hold a press conference outside of the Federal Courthouse in Tucson to call for the federal government to provide proper medical treatment to Imam Jamil Al-Amin (formerly known as H. Rap Brown) and transfer the civil rights leader back to the custody of the State of Georgia so that he can be exonerated and freed nearly twenty years after his wrongful conviction for a crime that another man has repeatedly admitted to committing.

In Georgia, Imam Jamil will be able to directly participate in the ongoing review of his conviction and help prove his innocence to the newly elected Fulton County District Attorney Fani Willis. The Conviction Integrity Unit, a division under the District Attorney’s office, has the authority to exonerate Imam Jamil.

What: Press Conference & Protest urging USP Tucson to transfer Imam Jamil to Georgia and for the Fulton County District Attorney to exonerate him

“I am blessed to give my strong words of solidarity for my dear brother Imam Jamil, known to many of us early on as the great H. Rap Brown. It is a travesty and a tragedy that his work and his witness is not known to the world in terms of the deep love inside of his soul for not just poor people, but oppressed people around the world.”

said: “The unjustified detention of Imam Jamil has been long overdue. We cannot stop this fight until he is fully released.”

“Our justice system is not only broken but inhumane. Two decades later, Imam Jamil Al-Amin is still wrongfully imprisoned despite multiple confessions. There is no room for debate on who is deserving of basic dignity and human rights. It is disgusting to see the neglect that has caused a 77-year-old man to go blind.”

“Our government has intentionally erased the legacy of those who challenged the status quo. That is why 21 years later, there is a generational gap between our true freedom fighters and young activists today. We cannot combat systemic injustice without seeking justice for those who were impacted by it. Imam Jamil represents the epitome of how the U.S. government utilizes divide and conquer tactics to ensure the next generation cannot unite behind a revolutionary.”

“We at Mass Liberation Arizona…stand in solidarity with the national movement calling for Imam Jamil Al-Amin’s freedom immediately. On August 15, 2021, along with local and national partners, we will shine light on the cruel and unusual treatment of Imam Al-Amin and the manifest injustice of holding him in a federal prison when he is a state prisoner, neglecting his medical needs and ignoring the confession of another man. We demand Imam Al-Amin be transferred back to Atlanta, Georgia immediately so the false charges against him can be investigated and finally dropped, as they should have been 21 years ago. Imam Jamil Al-Amin is another Black political prisoner who has been targeted by the U.S. government in retaliation for his revolutionary work. Mass Liberation AZ calls for his release and the freedom of all political prisoners.”

During the Civil Rights Movement, H. Rap Brown, as referenced in movies such as Judas and the Black Messiah and The Trial of Chicago 7, made his name on the front lines as the fifth chairman of the Student Non-Violent Coordinating Committee in the 1960s and was heavily involved in the fight against Jim Crow Segregation.

Brown was also targeted by COINTELPRO, a covert FBI surveillance operation in the 1960s that targeted Black Civil Rights Activists such as Martin Luther King Jr. and Malcom X. House Resolution 2998 (“The COINTELPRO Full Disclosure Act”), which was introduced by Congressman Bobby Rush with 23 cosponsors, demands that the U.S. government disclose redacted files related to the COINTELPRO operation.

H. Rap Brown later embraced Islam and adopted the name Jamil Al-Amin. Ultimately, as a leader of Atlanta’s West End neighborhood, Imam Jamil fought against the use of drugs and prostitution in his community.

Imam Jamil Al-Amin is in his 21st year of a life sentence for a crime he did not commit. Another man has repeatedly admitted committing the crime including under oath. Imam Jamil is now 77 years old and recently became legally blind due to denial of cataract surgery for 3 years.

His case is currently under review by the Fulton County District Attorney’s Conviction Integrity Unit. There is no evidence placing Imam Jamil at the scene of the crime: no fingerprints, no gun residue, no DNA. In fact, Otis Jackson has been consistent in his confession of the crime for which Imam Jamil is serving a life sentence (giving multiple written sworn statements and testifying in another trial under oath), and evidence corroborates the confession of the person responsible for the crime, Otis Jackson.

Despite Imam Jamil serving a life sentence for a Georgia State offense, he is being housed by the Federal Government at the United States Penitentiary in Tucson, Arizona away from his family and his attorneys. Imam Jamil is categorized as needing a level 4 facility due to his extensive medical needs; however, the Federal Prison System has kept him at a level 3 institution and has completely failed to provide him with necessary medical treatment. They have essentially blinded Imam Jamil intentionally.

The 11th Circuit Court of Appeals addresses the gross misconduct by the prosecutors in this case, specifically stating “We regret that we cannot provide Mr. Al-Amin relief in the face of the prosecutorial misconduct that occurred at his trial. A prosecutor’s duty in a criminal proceeding is not to secure a conviction by any means, but to ensure that justice will prevail. The prosecutor at Al-Amin’s trial failed to live up to that duty.”

There is currently an undocumented gag order on Imam Jamil wherein historians and the media have been completely denied access to him in prison. He is deliberately being erased from history.

Led by the efforts of Kairi Al-Amin (Imam Jamil Al-Amin’s son), District Attorney Fani Willis and the Fulton County Conviction Integrity Unit have been petitioned. To date, more than 70,000 signatures have been gathered calling for the exoneration of Imam Jamil.

ICNA Council for Social Justice (CSJ) is a social justice/human rights organization that strives to systematically facilitate assertive Muslim involvement in the field of human struggle for the rights of the poor and oppressed in the United States.

Black Lives Matter Phoenix Metro is an inclusive, abolitionist collective of community members on occupied Akimel O’odham and Pee Posh territory, also known as Phoenix, Arizona. We challenge police brutality and value all Black lives: queer and trans folks, disabled folks, undocumented folks, folks with records, women, and all Black lives along the gender spectrum. Our focus is not only dismantling white supremacy and abolishing police/prisons, but also helping our community heal from generations of trauma and grow stronger.

Mass Liberation Arizona is a non-profit organization that centers the experiences and leadership of directly impacted people seeking to end mass incarceration in Arizona.