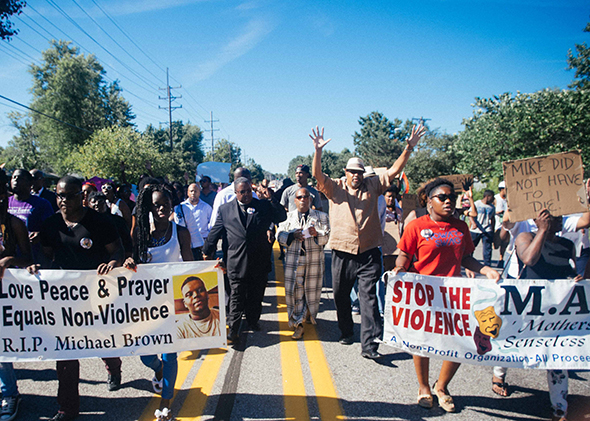 Ferguson, a small suburban town in Missouri, has recently earned global fame. The shooting and killing of a black teenager, Michael Brown, by a white police officer, Darren Wilson, on August 9 and the violent street protests afterward, where the State Governor has called the National Guard and imposed midnight curfew — all have been covered extensively worldwide. A vigorous debate on the centuries old thorny issue of Race in America has been ignited again in media outlets as well as in the public policy forums. The debate sometime became very intense on the social media sites during the last three weeks. The Ferguson incident raised several questions about the social fabric of the American society. Let’s examine some of them here.

Firstly, the social impact of changing demography. Ferguson, a suburban town of 21,000 people and a part of a metropolitan St. Louis City, is administratively included in the St. Louis County. While most of the county population is white, Ferguson and neighboring towns are predominantly black. Blacks were once a minority in Ferguson, but the city’s demography has shifted in the last decades after white families moved out to surrounding suburbs. In 1970, whites were the 99 percent of the Ferguson population. However, in 2010, 67 percent of the population was black. According to an expert, Ferguson has “a relatively stable, working and middle-income community but it does have its pockets of disadvantage.”

On the other hand, the town’s executive leadership and its police force are predominantly white, almost 94 percent in 2014. And it does have some negative impact. A racial profiling study shows that while blacks make up 67 percent of the city’s population, they account for 86 percent of traffic stops by the police, and 92 percent of all arrests in Ferguson.

The irony is that according to another newspaper report, one fourth of the town budget is collected through court fines in small towns in Missouri and mainly come from the blacks and other minority groups.

Another sad fact is that, unfortunately, the shooting and killing of a black teenager was not an isolated event in American policing. It is a pattern. According to the latest available homicide report data to the FBI, during the seven year period ending in 2012, nearly two times a week in the United States, a white police officer killed a black person. Compared to white teenagers, black teenagers are twice as likely to be killed by a white police officer.

Secondly, the ethnic and political polarization on race issues is very severe in the society. According to the latest Pew Research poll, 80 percent of black people said the Ferguson case raises important issues about race. Thirty-seven percent of white people surveyed agreed. However, 47 percent white people also said that race has been getting too much attention in America. The responses broke along political as well as racial lines, but then politics follow clear racial lines. So one should not be surprised that while 68 percent of Democrats thought the shooting raises important racial issues, only 22 percent of Republicans thought so. Some media commentators on Fox News even declared that talking about race issues is itself racism.

These pundits generally do not consider that there is a race problem in America. For them a male black youth is a criminal so he should be treated always as a suspect. For some of them the real issue is that the blacks are killing more blacks than the police.

Another angle of the prevalent racial polarization in the society is that, according to some of the press reports, more than four hundred thousand dollars were collected by almost 9000 donors on the internet for the white police officer, Darren Wilson, who shot Michael Brown. The online campaign for the murdered victim was also vigorous where more than 8000 individuals contributed but the total donations were less than the amount collected for the police officer.

Thirdly, the racial prejudices are historically deep rooted in the society. It seems that we are dealing with two different Americas, two different mindsets. There is no question that the U.S. has made great strides in achieving racial equality during the last two centuries. Having an elected black president twice in the White House is the ultimate unthinkable prize in this field. As a society, we were able to change the laws, amend the rules and regulations, and improve the human actions and behavior. Unfortunately, the great failure is that we were unable to cleanse the human hearts on the issue of racial equality in America. It is a continuous struggle between the ideals of liberty and justice with the reality of an imperfect union.

In 1999, The American Assembly, a public policy forum established by President Eisenhower at Columbia University in New York City, presented that the American society was not able to answer four divisive issues despite the tremendous technological and economic progress. These are economic disparity, racial inequality, family disintegration and role of religion in the public life. Racism is an explosive issue and with increasing political polarization, especially after Obama became the President, it needs to be addressed at all levels. The Assembly in its report on race in America offered several measures to improve the situation. Dialogues, education, economic opportunities, better housing, changing the prison system and volunteerism are included in its list of recommendations.

Let me also offer two suggestions, one practical and the other philosophical: It would be better for maintaining local peace and harmony if the racial makeup of the community should also match the racial makeup of law enforcement force. A huge gap between the compositions of the community population and the police force could any time trigger a severe racial unrest. The state governments and city/county administrations should take extra measures in this regard. The rules, regulations and laws are meant to control, correct and change the human actions and behavior.

American scholars and policy makers should ponder upon the limitation of human intellect in resolving human miseries. The liberal western civilization, after rejecting any role of the divine guidance in solving human problems, depended solely on man-made philosophies and ideas to tackle the big issues that the state and society are facing in recent history. Race in America is only one of such issues.

Laws, rules and regulations can only alter the human actions and behavior. The human hearts, on the other hand, could only be cleansed through the spiritual and divine guidance. Muslims are well aware of the last sermon of Prophet Muhammad (pbuh) during his last Hajj, when he profoundly declared, “All mankind is from Adam and Eve, an Arab has no superiority over a non-Arab nor a non-Arab has any superiority over an Arab; also a white has no superiority over black nor a black has any superiority over white except by piety and good action.” That divine guidance changed the human hearts. The challenge is how these types of ideas can be embedded in the minds of our younger generation so that they can have a fruitful future free of racism.

About Author – Dr. Zahid H. Bukhari serves as Executive Director of the Center for Islam and Public Policy (CIPP) in Washington, DC area. Previously, he worked as Director, American Muslim Studies Program (AMSP) at the Prince Alwaleed Center for Muslim-Christian Understanding, Georgetown University, Washington, DC. From 1999-2004, he also worked as Director, Project MAPS: Muslims in American Public Square, which examined the role and contribution of the Muslim community to the American public life. Dr. Bukhari’s research interests focused on Islam in the West; Muslims in America; religion and politics; and religion, humanitarian aid and development. He is also editor of the Project MAPS volume: Muslims’ Place in the American Public Square: Fears, Hopes and Aspirations; and the CIPP volume: Observing the Observer: The State of Islamic Studies in American Universities. Dr. Bukhari has a Masters in Economics from the University of Karachi, Pakistan and Ph.D. in Political Science from the University of Connecticut, USA.